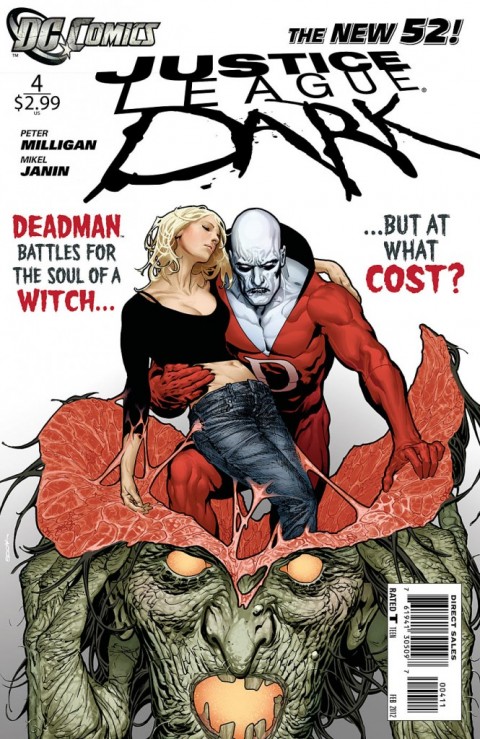 With the DC reboot, the company took a bit of a step backwards in expanding the Justice League family tree, similarly extending their line as they did with the old JLI and JLE books. Justice League Dark (JLD) adds a bit of a twist to the concept, bringing together many of the DCU’s notable magicians, sorcerers and mystics to tackle the world’s biggest magic-based threats. What happens though when DC’s brightest heroes fall short of stopping a threat like a deranged, positively insane Enchantress? Who are you going to call? John Constantine, Deadman, Shade, Madame Xanadu and Zatanna, that’s who.

The ever unpredictable Enchantress is up to her old, evil ways. After having been split from June Moone, the other half of her personality, the evil half seeks out her good self to re-integrate June such that Enchantress can again become whole. Standing in her way is a rag-tag group of mystics including  John Constantine, Deadman, Shade, Madame Xanadu and Zatanna whom hope to stop the evil witch before it’s too late.

The issue begins with June and Deadman in dire circumstances against Enchantress, leading Deadman to merge with the witch in order to save June from Enchantress’ clutches. Delving into her mind, he discovers this wasn’t the real Enchantress. Presently apart from her beau, Dove arrives home to find John Constantine sitting in her kitchen, who enlightens her as to the dangers that are coming their way. Meanwhile, Shade has a run in with Mindwar, who is not receptive to the idea of joining Madame Xanadu’s team. All of this is viewed by Xanadu, who becomes increasingly worried that they may not be able to stop the forthcoming onslaught; thousands upon thousands of June Moone and Enchantress copies commence country-wide carnage characterized by decapitating or maiming regular citizens in the streets, in malls and where they work. The insanity’s genesis emanates from a small little cabin in the middle of a field in the rural country side where Enchantress’ power grows with each moment. As she discovers the copies of herself and June Moone have failed to locate the real June, she decapitates one of the June copies, before sensing the presence of Zatanna outside. She sends the copies out to confront her; they quickly overwhelm Zatanna and she teleports away, arriving beside Shade who attempts to recruit her to Xanadu’s team. Concurrently to these events, Constantine confronts Xanadu about her role in June Moone’s current predicament. Little do they know that as they argue over June, one of the June copies has found the real June hiding in a hotel with Deadman. He attempts to open a portal to escape with June and steps through, but as he does June is left behind as Enchantress’ forces converge on her.

The fourth part of the book’s opening arc was interesting. While the main conflict appears to be the connection between June Moone and Enchantress and the running thread bringing all of the mages together in this story to combat the main antagonist, the sub-plots help keep the story intriguing. While the main Enchantress story is the primary plot point, Shade’s recruitment drive, the Dove-Deadman love story and Constantine’s accusations towards Xanadu freshen the storytelling while also peeling back the layers and perhaps answering the primary story’s questions towards a greater understanding and comprehension of the circumstances which face the book’s characters. In this issue we discover the reason Xanadu is so intent to gather a team of magicians to combat Enchantress; she had a hand in initiating their current predicament. Altogether, Milligan is nicely balancing the book’s cast, seamlessly weaving each character in and out of the book masterfully while still giving equal gravity to their appearance and their contribution to the greater story. With each I page I feel like Milligan is building towards something, and with near flawless execution, despite not being a runaway hit of the New-52 I feel it can be another sleeper hit of the relaunch.

Janin’s pencils/inks brought everything I look for in a comic book’s artwork. There’s a tremendous amount of variation in the issue’s panel/page arrangement that’s intuitively creative, amazing, and at times, breathtaking in his clever indulgence of the fantastic. From front to back, the art is of a high calibre whose quality and depth place it in a category among DC’s best. The opening three pages of the book hit you hard and fast with amazing visuals, such as Deadman’s attempt to merge with Enchantress, his travels through the husk’s mind and his reemergence from its body. Janin’s amazing art continues through the next few pages during Shade’s conversation with Mindwar, as the former’s magical powers manifest in a colourful array of energy which could not have been easy to draw. The page that follows depicts Madame Xanadu as she conjures images of the carnage across the country. With her in the background, stretching her arm out towards the jar as a purple hue overwhelms her complexion, green energy funnels into the jar. The issue simply doesn’t let up on its beauteous assault on your eyes. Joining Janin is colourist Ulises Arreola whose fantastic talents helped hit the fastball thrown by Janin right out of the park. Arreola outdid himself here, creating a fantastic, colourful parade of visuals which overwhelms the pages and creates a spectacle unto itself. Deadman’s exploration of Enchantress’ mind, the aforementioned Xanadu conjuring and especially the latter pages featuring Enchantress escaping an envelope in a storm of green energy, or the final page when the June copies converge and form a gigantic effigy of Enchantress. Each page is finely detailed and wondrous. The panel arrangement isn’t limited to a set layout, allowing it to breathe and not become muddled within the confines of a standard composition.

Justice League Dark is an anomaly in the DCU. Although its magic-based characters have been given a fair chance to succeed in the past with their own title, especially Constantine with the long-running, successful Vertigo series Hellblazer, they collectively haven’t truly been given a story with the scope, direction and vision that this book seems to have. There are interesting stories to tell with magic-based books that other series simply don’t allow, and with Peter Milligan crafting the plot it’s already clear this book is placing some of the DCU’s underutilized characters front and centre, combating threats no other can face. I like the concept of the book, and hope it does well. It’s a book which shines light on some of the DCU’s lesser known figures, and with Milligan, Janis and Arreola helming the book’s creative team, I expect great things from this book as Milligan’s plot incrementally builds towards a conclusion.