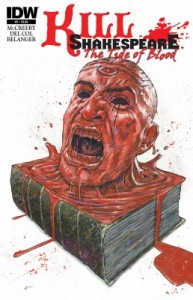 It’s rare for a comic book sequel to challenge the original work. Yet with Del Col and McCreery’s follow-up to their critically successful original 12-issue run, they prove that not only were they up to the task of creating a sequel as merit-worthy as their first series, but also that they were capable of one-upping their freshman effort altogether.

Tide of Blood has taken the remaining characters from the pair’s original Kill Shakespeare series and placed them in an all-new predicament opposite the insane wizard Prospero. This however only provides the needed plot device to move the story along and bring the series’ ending to fruition.

With the fifth issue, Del Col and McCreery bring their Tide of Blood tale to a close, rocketing towards the inevitable climax between Romeo, Juliet and Hamlet. The ever-present love triangle that was destined to drive a wedge between the three explodes directly at the outset and hardly ceases until the book’s final pages.

This second series has placed a great deal of emphasis on the three-way relationship between Romeo, Juliet and Hamlet, a plot line we’ve seen come to an aggressive, violent and truly Shakespearean conclusion with the end of the series. From the outset of the fifth issue Romeo’s demeanour and poisoned state of mind, although artificially encouraged, emanate from his core. The ravenous infatuation he feels for Juliet even now drives him to act and strike against his former comrades as they hang captive. The sullen nature of Juliet and her former Romeo is further emphasized as she attacks Romeo and smashes his skull with a stone. An interesting parallel between the two appears, and we soon discover that Juliet and Romeo are very much alike in their actions and their measure of passion for each other, treading and crossing that ever-present line between love and hate; punctuating their star-crossed tragedy ever more.

The subplot centres around a conflict between Prospero and Shakespeare himself, who after travelling the world returns to end Prospero’s threat to Shakespeare’s creations. As the issue unfolds we find that Prospero wishes to completely unravel every fibre of what Shakespeare created, and then remake it from the ground up in his own image. A surprising character entry to the mix shifts the conflictual paradigm just as Prospero sends Shakespeare to the brink of defeat, momentarily saving the world and turning the tide of their bloodshed. This act sets the stage for a final encounter between Shakespeare and Prospero, where Prospero discovers the full gravity and madness of creation, a reality he could never fathom before taking Shakespeare’s quill. The result is a bittersweet conclusion to Prospero’s story that makes you feel for him, yet step back and welcome it simultaneously.

The ending itself is cause for pause leading into the next chapter of the Kill Shakespeare saga, taking what many might have imagined as the conclusion of the Romeo-Juliet-Hamlet dynamic and turning conceptions of any potential climax upside down. The conclusion brings the lives of the principal characters to ruin, while progressively pushing the story forward beyond its status quo. A hallmark of this series has been Del Col and McCreery’s willingness to unsettle, antagonize or outright kill their “darlings,” and that storytelling freedom has enabled their platform to tell their fantastic story and which continues to allow for evolution, improvement and captivation.

The series would not fully be what it is had Belanger not been brought back on board for this follow-up to the team’s original run. While Del Col and McCreery have evolved with each issue, so to has Belanger’s skill-set as he continues to explore his own style while continuing to utilize outside-the-lines page formulas to visually tell the writing team’s story. Varying between close-in panels, wide-frame panels and environment spanning locations, Belanger exudes confidence in his composition. His characters are as expressive as ever, while the violence on display throughout the issue does so not for the sake of violence itself, but rather it feels emotionally charged with the passion of the characters thus making the act seem plausible and necessary for the plot to continue. It’s that same violence that punctuates the conclusion of the series, setting the stage for whatever might come next from Del Col, McCreery and Belanger. As a counter-balance, Belanger has created awe-inspiring environments that provide the backdrop for Shakespeare and Prospero’s battle, while the Chamber of Secrets’ inherent blank madness denotes the complexity of creation, that no form can simply be created. It has to be inspired and put into action by a willing creator with the imagination to do so, and so we find a moral of Del Col and McCreery’s Shakespeare in the heart of a pivotal moment of this second series’ final issue.

With this second act completed, the best is yet to come from Del Col, McCreery and Belanger. Their story continues to evolve and ripen, improving with each new issue. A staple of the series has been the creators’ willingness to take chances with their work, a philosophy that has paid dividends for them and has resulted in an overwhelmingly fantastic comic that only gets better as it develops. Belanger has been an integral piece of the entire journey, giving Del Col and McCreery’s words visible weight, combining together to tell a complete story that continues to be the prologue to greater things.