If you have been reading the previous articles in this series (Chapter 1 & Chapter 2) you know that I have been preparing to cosplay at Fan Expo this past weekend for a while now.

Well, Fan Expo has come and gone and I did it, I cosplayed for the first time. My costume came out pretty well if you ask me. Mostly because it was made by Super Suckers. I gathered and created all the accessories. CDB’s own Ed Campbell lent me the bow, which I think made the outfit!
I was nervous the whole week leading up to the day I cosplayed. I wasn’t getting my entire costume until Saturday, and I was nervous about the fit. I wanted to look my best, and with that much of my stomach exposed I wasn’t feeling like the most confident person in the world. I also didn’t want my costume to look half assed. I always admire people with amazing costumes and didn’t want to look thrown together. All my nervous energy worked in my favour though, I made sure every detail of my costume worked and looked great. 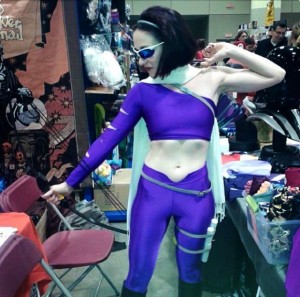 I arrived on Saturday at the convention centre with my regular clothes on and quiver and fake arrow ends in tow (didn’t want to risk real ones because they may be considered a weapon and I wouldn’t have been let in). When I arrived I went to the ladies washroom and quickly changed. When I emerged as Kate Bishop I noticed something, as many people were watching me walk into the washroom as were watching me walk out. There were so many people dressed in cosplay on Saturday, that no one really seemed to notice me, and I found that comforting.

I was lucky enough to be working a little at the Sucker’s table at the Silver Snail booth, so I could put all my bags and regular clothes under the table. I believe this is key when cosplaying, I mean, most superheroes don’t carry backpacks.

Nervous, in my bright purple spandex, I stayed in the booth at the beginning and that is where the first person asked to take my photo. They were very polite and complimentary; everyone who asked for my photo that day was. No one took my picture without asking first, come to think of it people were way more polite to me when I was in costume than in my regular clothes. Not to mention that other cosplayers were super sweet to me as well. Whenever I made eye contact with someone in a good costume, they would do a slight nod. I’d compare it to two men in muscle cars driving past each other and nodding.

After a couple pictures were taken, and some complements were thrown my way, I decided I was brave enough to walk the floor and go visit some artists I know. Now, my costume wasn’t very large, in fact it was form-fitting and fairly tiny, but walking through those crowds was hard. I had a quiver full of fake arrow ends that was strapped to my back and oh man did they get squished, bumped, pulled… every terrible thing imaginable. I don’t know how cosplayers walk around in large or complicated outfits, when you spend hour upon hour on a costume just to have some mouth breather bump into it, it has to be frustrating!

Overall I had very good experience cosplaying and I would definitely consider doing it again. You really have to want to put the time, effort and money into your costume to make it look good. This experience has really taught me to have a high level of respect for all the cosplayers out there.

You are true fans, you are brave and you look awesome!