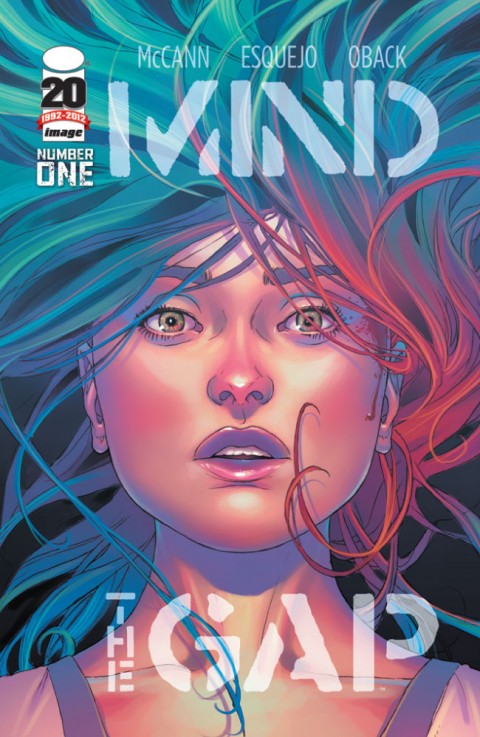 Stories with an air of mystery injected into their plots almost always make for more interesting stories. They are sure to develop slowly, offering a wealth of gradual revelations, with the payoff, ideally, being something we couldn’t have suspected. As with any though, it’s difficult to grasp where a story can be headed after only its first chapter, leaving readers to ponder the allusions throughout the issue and what they may mean in the greater context of the arc.

McCann’s Mind the Gap revolves around a young comatose girl in her mid-20s who was brutally attacked on a subway platform. The story actually begins in a prologue issue available prior to the first book’s release, but is included with the series’ first installment. In the introduction we discover her friendships and the upper class familial life she leads; we meet her mother, father and brother en route to the grander revelation of the young girl, Ellis, confined to her hospital bed. The greater mystery eludes their comprehension, while a mysterious hooded man converses with his benefactor about the deed, hinting at a larger conspiracy at play. This leaves the reader, accepting this as the hook of the story, to ponder what’s so special about a seemingly normal young woman?

The first issue proper begins essentially where we left Ellis in the prologue. Deep within her mind’s recesses, she grapples with her thoughts as she tries to grasp who and where she is. The song from the prologue returns, complementing her internal monologue seamlessly as the text reads perfectly and organically. Creeping through her neural pathways, she pulls back the veil of her confusion to reveal her out of body experience; hovering high above herself she sees her family waiting for her to wake up, although it’s very clear from their conversations and interactions that they’d rather be anywhere else. They quickly leave upon the arrival of Ellis’ friends, including her boyfriend, who decide something is peculiar and amiss with Ellis’ predicament. McCann peels back the first layer of the mystery upon revealing Ellis’ heightened brain activity during an argument between the two doctors on her case; the Glasgow scale, which measures the severity of a patient’s coma, indicates Ellis is a near hopeless case despite her minor head injury. Questions begin to mount as the intrigue in McCann’s story blossoms, while the story’s mystery blooms even more on an interesting splash page littered with word bubbles featuring comments, statements and proclamations by the people in Ellis’ life. The statements, including “beautiful daughter,” “liar,” “killer,” “I love you,” “broken” and “saviour,” litter the page with an onslaught of emotional range fitting of the twisting and turning mystery McCann has crafted. The questions hardly end there, as the issue ends with an exclamation mark after a walk through Ellis’ consciousness appears to demonstrate unusual capabilities.

Joining series writer/creator Jim McCann are artists Rodin Esquejo and Sonia Oback. Their work captures of range of emotions and emphasizes the depth of the book’s varying environments. As we explore Ellis’ mind through the team’s visuals, we gradually are able to piece together the fractured remnants of her thoughts resulting from her injuries. Stumbling through the darkness, she reconstructs her memories aided by her guide, creating her “stage of life” before delving further to discover her last thoughts before her coma. The colours of the characters as she reconstructs her environment offers a psychedelic rainbow of characters’ consciousnesses inside “the garden.” Their work later in the issue is truly remarkable though as Harold Crenshaw jumps into his car on a rainy night and speeds to his destination with presumably critical information about Ellis. The series of pages featuring his accident are fantastically coloured and detailed, covering a palette of nuances from the reflections of his tail lights on the road, the rain water splashing around his wheels and the minute swerve impressions on the road trailing behind the car. Another page features his car going off-road with a blurred effect that makes it impossible to distinguish any degree of detail, but accurately reflects the situation. The level of detail in these pages is simply astounding. Also, while very often letterers may be overlooked for their work, Lanphear’s lettering was an essential part of the experience. It changed to reflect song lyrics, sound effects, and notably, the previously mentioned page where Ellis’ final thoughts flood her mind; each was done with such excellence that it’s worth remarking upon.

Mind the Gap offers numerous inroads for readers. McCann has crafted a superb tale ripe with mystery and a classic “who dunnit” story with some abstract supernatural elements added to keep readers off-balance. With a wealth of suspects, emphasized by McCann’s “Find the Gap” blurb at the end of the issue, the importance of the timing in the book in relation to the assailant offers a wide range of story possibilities. Promising that readers already have read the attacker’s name over the book’s 46 pages, it encourages second, third and fourth readings to go back and try to piece together the early clues of the mystery, making this book well worth its price not only for the evidently well-plotted story and tremendous artwork, but simply for the fact there are no clear answers to the mystery and you’ll need to re-read the issue just to find the not-so-obvious clues.