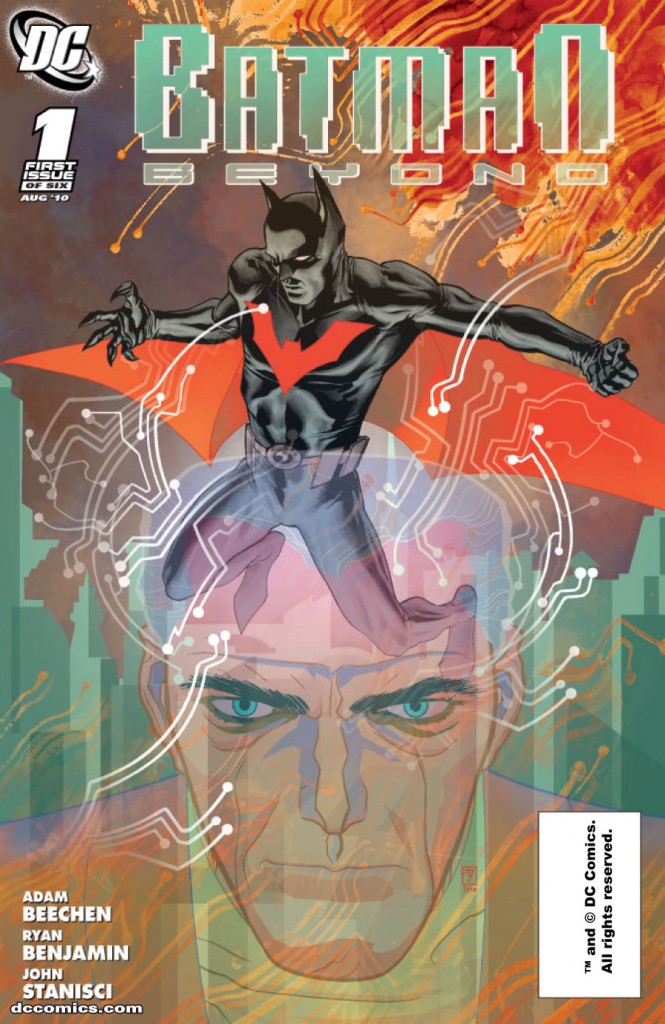 And so the legend grows. Years ago a cartoon featuring a new Batman with an elderly Bruce Wayne as his advisor made its debut on cartoon networks. The series starred a young man named Terry McGinnis who had stumbled onto Bruce Wayne and his secrets. With his blessing, Terry assumed the mantle of Batman and fought his own generation of rogues. The show was eventually adapted into an animated movie featuring the return of the Joker, with its history fleshed out further in Justice League Unlimited where we learn Terry is Bruce’s biological son. Yet, we’ve never been quite sure how much of this takes place in continuity, especially considering the appearance of Damian in Batman #700 in the Batman Beyond era, or very little acknowledgement of it in comics. Well, that uncertainty appears to be at its end with this six issue mini-series. 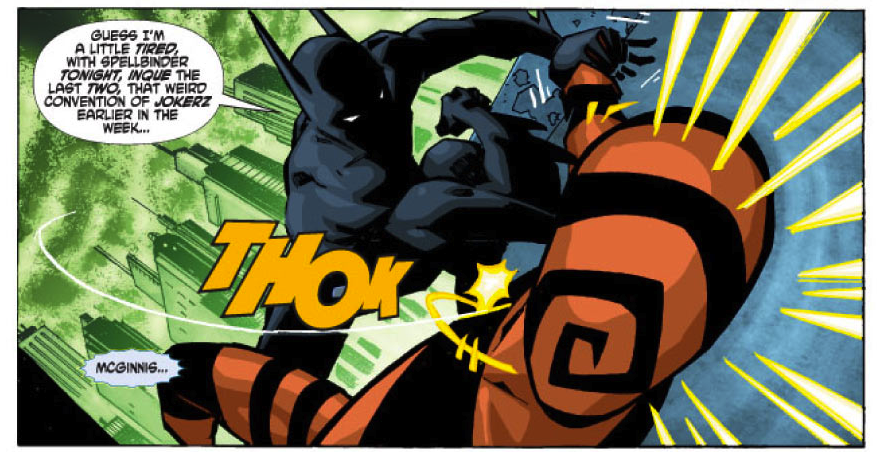 We only know Bruce Wayne as Batman. Sure, some have stepped in for him, but for all intents and purposes, Bruce Wayne is Batman. Yet, what happens when he can’t do it anymore? When he physically can’t do it anymore? Enter Terry, a down on his luck teen with a tragic story of his own. Together and with Bruce’s blessing, Terry fights crime in the Gotham City of tomorrow as Batman Beyond.

The story is set in an undetermined future Gotham. Bruce Wayne is now an elderly man, with Terry as his protégé. Together they fight crime; Terry on the streets, with Bruce as his eyes and ears in the Bat Cave.

The story introduces us to an aged Amanda Waller as she and an aide investigate an apparent break out and subsequent murders at Cadmus Labs. The scene segways into an action sequence of Terry fighting a new villain named Spellbinder. With Bruce in his ear using their communication link, Bruce coaches Terry through the scuffle. In typical, no non-sense fashion, Bruce instructs Terry to stop playing with him and finish the job. Terry deposits a now unconscious Spellbinder on the “C” train, heading straight to police headquarters. Terry is then paid a visit by an old friend, with an even older invitation.

We’re then treated to a short scene at the Cave, where Terry arrives just as Bruce finishes work for the night on new toys for Terry’s utility belt. After paying Terry a rare compliment, they’re interrupted by a police scanner bulletin about a murder involving one of Bruce’s old rogues. Terry makes his way to the site, but is interrupted by the sounds of sirens heading towards St. James Hospital, a place where former Arkham Asylum inmates happen to be located. Terry arrives at the hospital where he finds another of Wayne’s old “friends” safely locked away. Moments later, Terry is alarmed by a woman’s screams several floors up. He races to the floor to find a man standing over a nurse; his only response once he realizes Terry is there is, “No…not yet.” He flees the scene as Terry rushes over to the nurse to find she had been cut all over her body; each cut was performed with surgical precision. The issue ends with it fairly clear that one of Bruce’s oldest, perhaps most cerebral enemies has returned to settle an old score and hush the Wayne legacy once and for all.

The art really left something to be desired. It’s very reminiscent of the art in Judd Winick’s Green Arrow and Devin Grayson’s Nightwing runs. The individual characters themselves maintain a blocky, unrealistic complexion. This is no more evident than in the Waller scenes at the beginning of the issue, with Bruce Wayne inside the Bat Cave as he and Terry speak, or when the book’s antagonist attacks Signal-Man. It isn’t so much Benjamin’s pencils as it is Stanisci’s inks which fail to bring the art to life. Although drawn reasonably well, overall the presentation feels flat.

What the art team does do well though are its action sequences and I feel like this is going to be the team’s bread and butter throughout this mini-series. From the first to final page, each action sequence is wonderfully drawn, complete with Frank Quitely-esque sound effects scrawled across the panels. It holds very nuanced touches like the the trajectory of a punch or kick as it cuts through the air, or a dramatic sound effect of Terry catching a punch. These are definitely nice additions to the overall product and add to the experience, but the oddly misshaped characters and bland inking of characters outside of their costume hurts the book, neutralizing what they do quite well.

The first issue of Batman Beyond is a good addition to the Beyond lore. The mini-series will mostly cater though to fans of the animated series. That familiarity with Terry and this take on the Batman character should prove to be successful for DC and help get fans of that series into comic shops. For anyone who didn’t watch the series, it may be a hit and miss. On the one hand, this is the first canonical entry into the Batman mythology for the Batman Beyond story. For them I’m not sure if the book will be able to hold that initial intrigue of it simply being a Batman title. Although the presence of Bruce Wayne does provide continuity in the Bat-verse and gives a clear indication of Wayne’s future, I feel like there’s very little here conceptually to hold an audience outside of the animated feature’s fan base.

With that said, the story was written fairly well. I’m not too familiar with Beechen’s work so it’s difficult to comment on his style, yet he captured the dialogue between Terry and Bruce decently, really emphasizing the mentor-student dynamic between them. Even more and perhaps alluding to the episode of Justice League Unlimited where Terry’s origin is revealed, we see legitimate concern for Terry on the part of Bruce, while also going so far as to praise the job he’s doing. He takes a very stiff-upper lip, “go-get ‘em sport” fatherly tone with Terry, which isn’t out of place with Bruce’s characterization. He does quite well filling the role of Alfred.

Beyond the character’s relationships which were written well, another good thing the book did was maintain a sense of mystery upon the conclusion. The final page immediately sends warning bells to longtime bat-readers as to the antagonist, but considering this is only the first issue of a six issue mini-series, I doubt Beechen has tipped his hand just yet. The only question that remains is how this ties into the larger Beyond mythology, and how it ties into the Damian Wayne mentorship we saw in Batman #700. This series should be accepted by longtime fans, but may be a tougher sell otherwise.