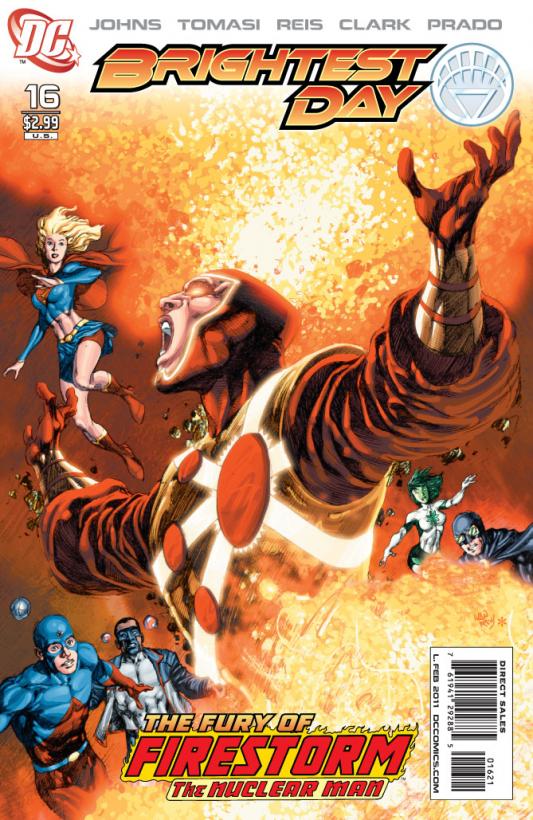 It’s been a whole two weeks since I last gave this title a proper lambasting, and to be honest, it’s left a hole in my life. A small one. Yet, here we are once more with yours truly as the host of Comic Book Daily’s Brightest Day review. We may not be the biggest dog in the yard (yet), but I can assure you these reviews won’t give the Brightest Day series sparkling reviews unless it actually deserves it. Without any further adieu, let’s have a go at issue #16 of this Blackest Night follow-up.

Twelve heroes and villains return from the grave, each given a second chance at life; each has been charged with a mission to herald the arrival of earth’s champion. 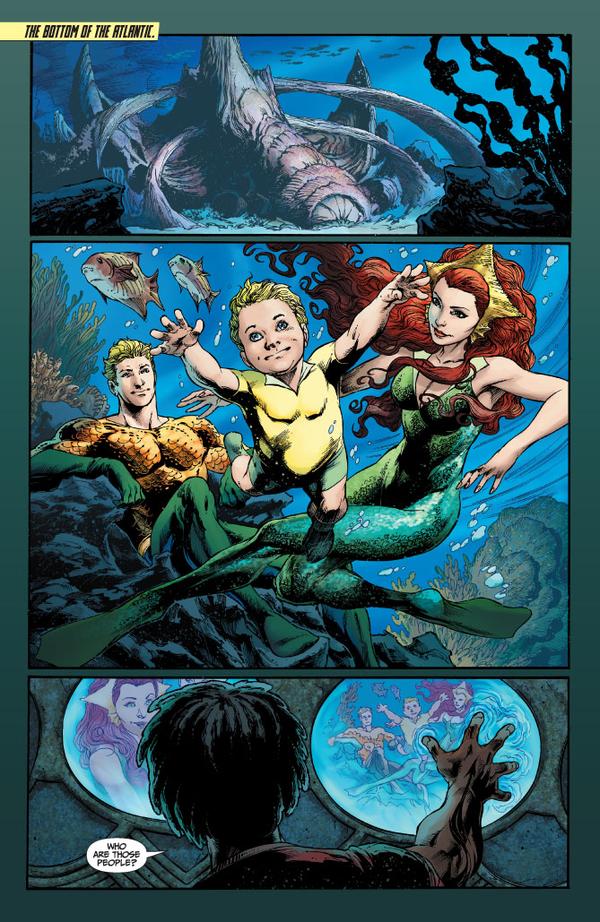 The book focuses on two stories: Aquaman and Jackson, and then the Firestorm arc.

Having escaped the onslaught of the Xebel forces, Aquaman, Jackson and his parents take refuge in an underwater safe house at the bottom of the Atlantic. where Jackson learns his history and that of his father, Black Manta.  He also learns of his role in the war between Atlantis and the Xebel forces.  Arthur takes Jackson deep into a cave off a cliff side, using the map they gained earlier to guide them to their prize. They stumble onto another seashell chest, one which reacts to Jackson when he touches it. It opens to reveal weapons and armour suited for him based on Atlantean technology, and more his destiny if he so chooses it.

Following the previous issue’s allusion, we find Firestorm in a diagnostic container as Jason and Ronnie are examined by Dr. Mid-Nite at the JLA satellite headquarters while Deathstorm tortures both Professor Stein and Alvin Rusch elsewhere. Back on the satellite, Jason and Ronnie begin to argue perhaps a little too much. The matrix becomes unstable and explodes, causing a big bang effect. The scene goes black, and we’re left to wonder whether Firestorm has destroyed the universe. 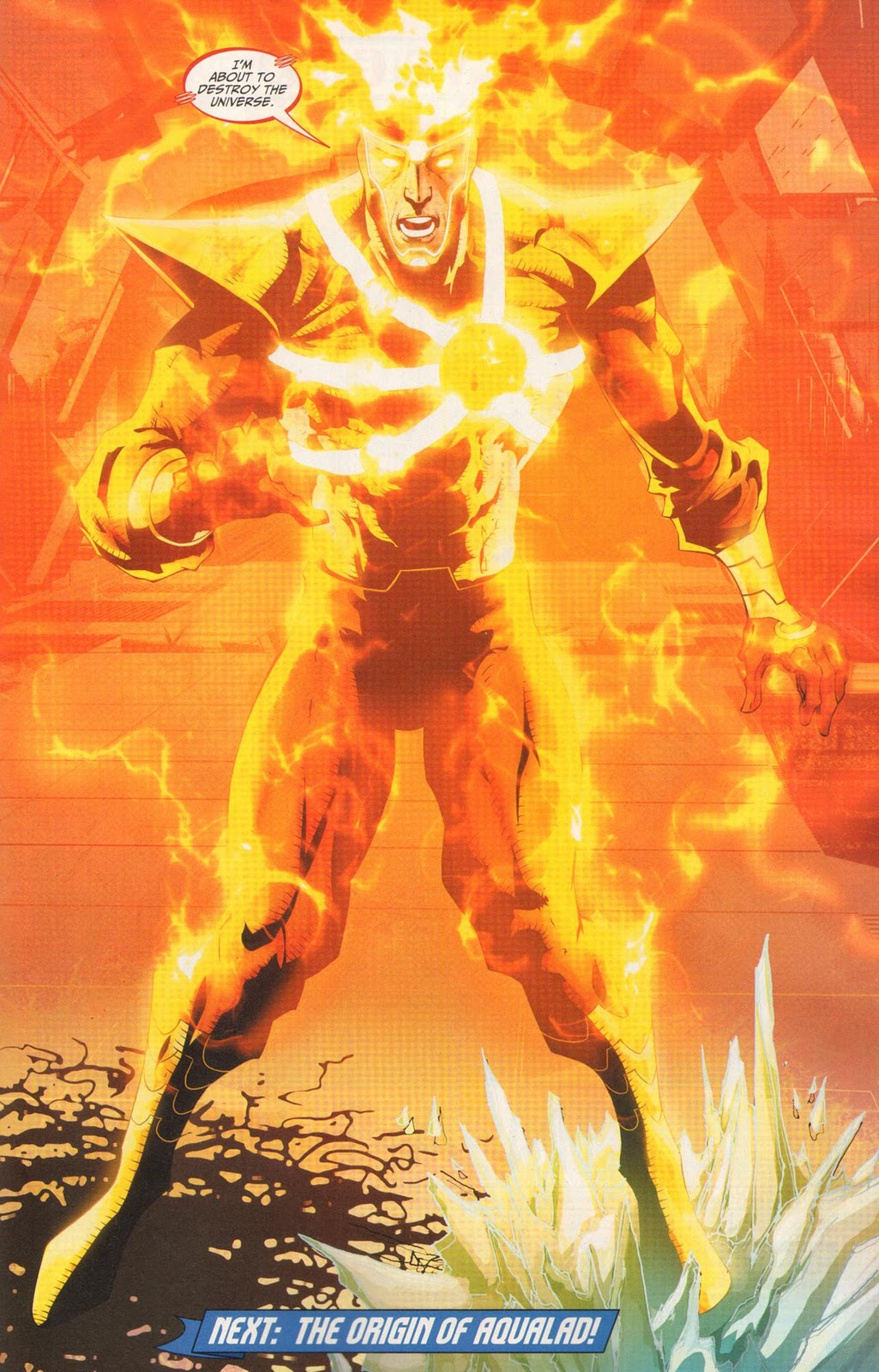 As always is the case when these two stories link in a singular issue, the art is great.

Reis uses varied panel layouts to develop the visual story, using longer horizontal panels on some pages, taller vertical panels on others, while also offering his trademarked splash pages and some other work that pushes the boundaries of conventional layouts. One instance earlier in the issue has 11 smaller panels along the top and bottom of two pages showing snapshots from the greater landscape. Reis then uses a larger horizontal section featuring Aquaman, Jackson and his parents standing in the centre of the safe house. It’s nicely set-up and tells the overall story of the page quite well, while giving it larger context with the landscape image in the middle. The remaining scenes shift between underwater fight scenes between Arthur and Jackson, and some great pages where the two simply talk while each successive panel captures slight facial differentiations. It allows us to watch Jackson gradually become fearfully enraged  until he just erupts. Despite his strengths in these pages, Reis’ weaknesses continue to be larger scenes involving characters where he doesn’t quite nail the same attention to detail, almost lazily drawing Aquaman in one of the cavern scenes while Jackson unlocks the shell, or later when he draws Aquaman helping Jackson calm down. Neither are particularly great scenes, but they’re far outweighed by the rest of his work.

Scott Clark’s work on Firestorm continues to be phenomenal. Clark employs a more creative demonstration of the Firestorm matrix than I’ve seen yet, while continually using a really cool looking fiery effect in each panel inclusive of Firestorm, Deathstorm, and then the final page where we see the boys as a fiery entity. Compared to Reis, mid-way through the issue Clark starts to use different panel layouts, notably an earlier page during the Deathstorm pages where he uses a thinner horizontal page featuring Alvin Rusch and Deathstorm, and then a smaller squared panel focusing more on Deathstorm as his head turns towards his destination. It’s simply another great transitory panel, but different from Reis’ offering. Towards the end of the issue, his art becomes truly fantastic. Clark breaks the third last page down into a half-circle on the right of the page focusing on Firestorm as they explode, while the outside of the circle offers a larger scene with smaller panels of Ray Palmer, Starman and Congorilla facing a certain end amidst Firestorm’s explosion. The art is solid, detailed, and darn right beautiful to look at. I’ve tried to find something wrong with Clark’s work and I’ve been coming up empty. 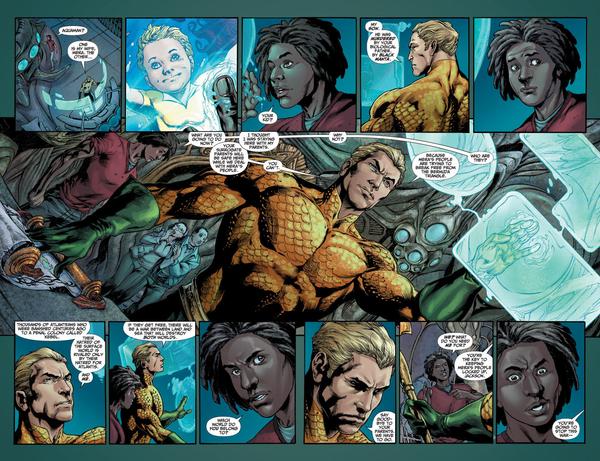 This was one of the few issues of this series that has stood out, and if you’ve been following these reviews, you’ll know I feel there have only been a handful. I’ve consistently enjoyed the Firestorm arc and being a fan of the character has certainly helped as I’m sure is the case for others and their own favourites. As a whole, the only stories that have been continual letdowns have been the Hawkman/Hawkgirl and Martian Manhunter arcs, while the remaining arcs have been solid. This particular issue brought us back to the Aquaman story in addition to Firestorm. Although not overly interested in the character, I feel like the Aquaman/Jackson arc has developed to be the best within the overall series, as it’s the one story that continually moves the arc forward meaningfully. The Brand and Firestorm stories are both good, but move forward at more incremental paces. Although my primary interest lays in the Brand and Firestorm arcs, I feel like the Jackson/Aquaman story could be the best among the five stories. The story has developed well, while the art is consistently fantastic.

As for Firestorm, I’m not sure what to make of the possible “Big Bang” moment at the end of the issue. Although a massive restart is unlikely with so many issues left, I’m curious about where Johns and Tomasi are going with the character and its story, and more, where Deathstorm is taking the lantern. The story itself is coming along, pitting the two young men who are naturally at odds with one another and can’t get along together thus creating a volatile partnership. The conclusion of their story is obvious, but the journey there is the interesting part.

In terms of layout, as expected this was another departure from the previous issues which had lately given us a single story, and then briefly alluded to the next issue with a single page. That was infuriating and made blatantly obvious how this story is being set-up. Unlike the previous handful, this issue read more like a typical comic book, switching back and forth between a primary and secondary story as opposed to a singular story as in the past few issues. I feel like this set-up regardless of the characters used is the best option for this book, not the singularly focused issues, nor the mish-mash of extraneously meandered story telling mechanics of the earliest issues. With this set-up, giving equal play to no more than two characters is the best option regardless of how the book as a whole is organized. As a reader and consumer, I feel like I’m getting ripped off otherwise. The issue as a whole was good, but I’m still concerned about the series’ overall direction, storyboarding and pacing which has dramatically hurt this series. I would still recommend not buying the entire series, because it’s not worth your money for what you’re getting. Wait for the trades, because the reading experience will be better as a whole.