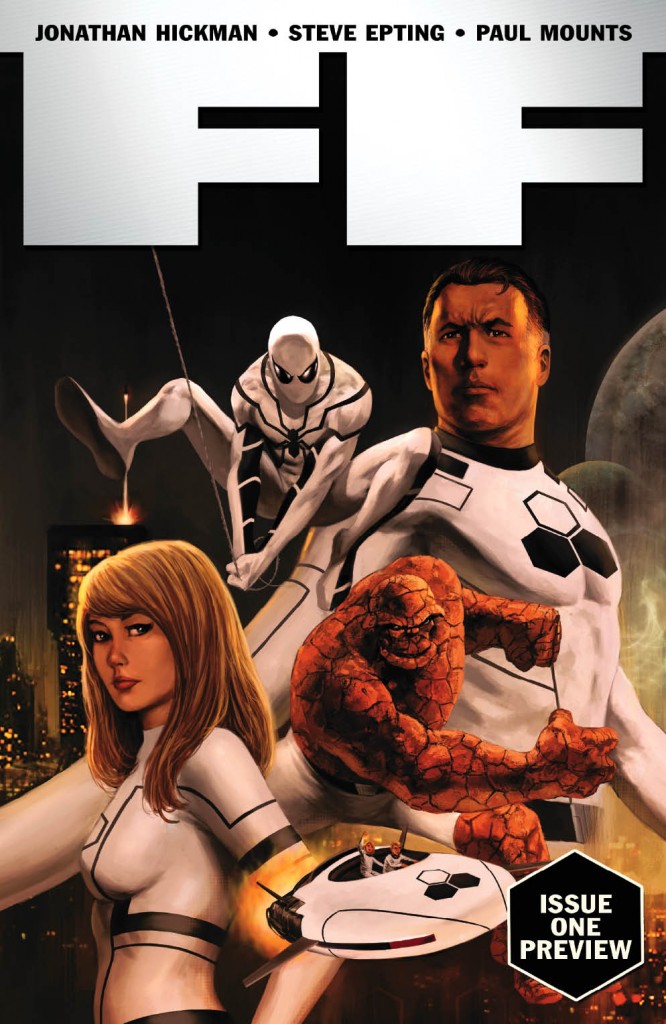 Still reeling from the loss of their friend and teammate, the remaining members of Marvel’s “First Family” try to put their lives back together. This is the first chapter of the rest of their lives and for Reed, Susan and Ben, theirs and the lives of their new teammates may never be the same.

Johnny Storm is dead and so are the Fantastic Four. Looking towards the future, Reed, Susan and Ben have laid the foundation for what’s to come and have surrounded themselves with allies old and new. They can only hope to be prepared for any threats that may arise in the Marvel universe. 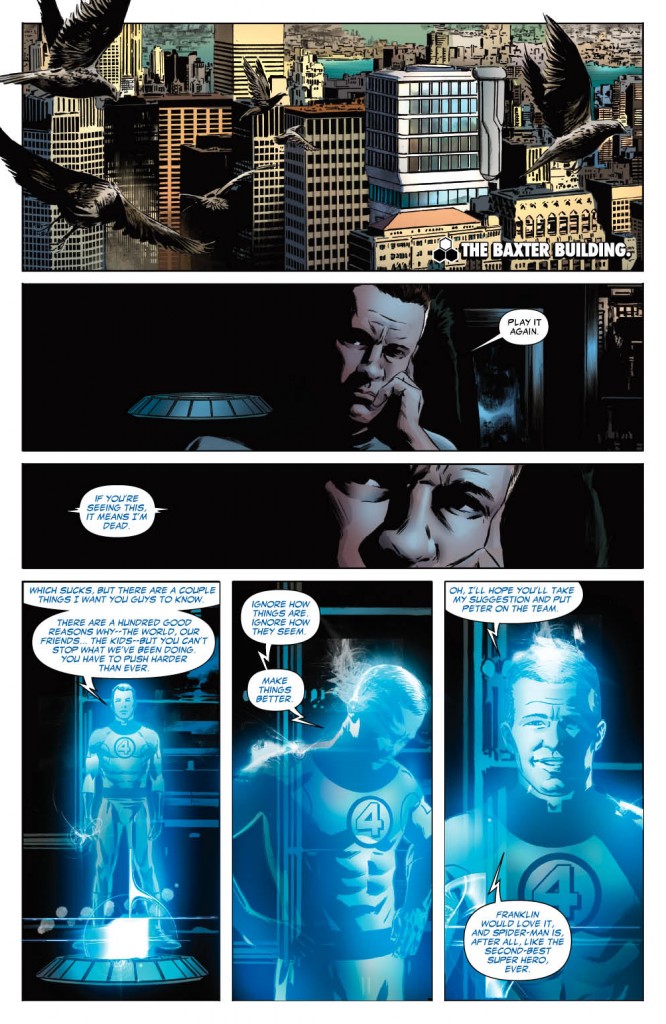 New uniforms, new logos and a new teammates. Reed watches a final video message from Johnny as the kids replace the old Fantastic Four logo with the new Future Foundation logo. Outside, Spider-Man swings towards the Baxter Building to join his new teammates later landing on its rooftop where Susan Richards materializes  in front of him. Together they travel down from the roof to the interior; Susan gives Spidey a tour of the building as she brings him up to speed with their lives. She elaborates on her role in Atlantis and Ben’s guilt over Johnny’s death. Susan takes Spidey to his room where she gives him a new uniform, one which can alter itself to either black or white depending on the user’s wishes.

Meanwhile A.I.M. agents break into P.A.V.L.O.V. where they attempt to break the Wizard out of his cell. After being alerted to the break-in, the Future Foundation arrives to stifle their jailbreak. With Ben leading the charge through the roof, the FF unloads some clobbering time and smashes the A.I.M. agents who scatter about the area. Unfortunately for FF, the Wizard regains his helmet and orders A.I.M. to wreck the place. Wizard and company teleport out of the prison, leaving the FF to wonder what could happen next.

Back at the Baxter Building, Nathaniel makes the family a roast and serves dinner to them. During their meal, Reed brings up the possibility of terraforming the moon which everyone sans Nathaniel considers to be a good idea. Valeria and Nathaniel approach Reed after dinner and tell him that they have something to tell him. The two take Reed to another part of the building where they meet with another new ally: Dr. Doom. 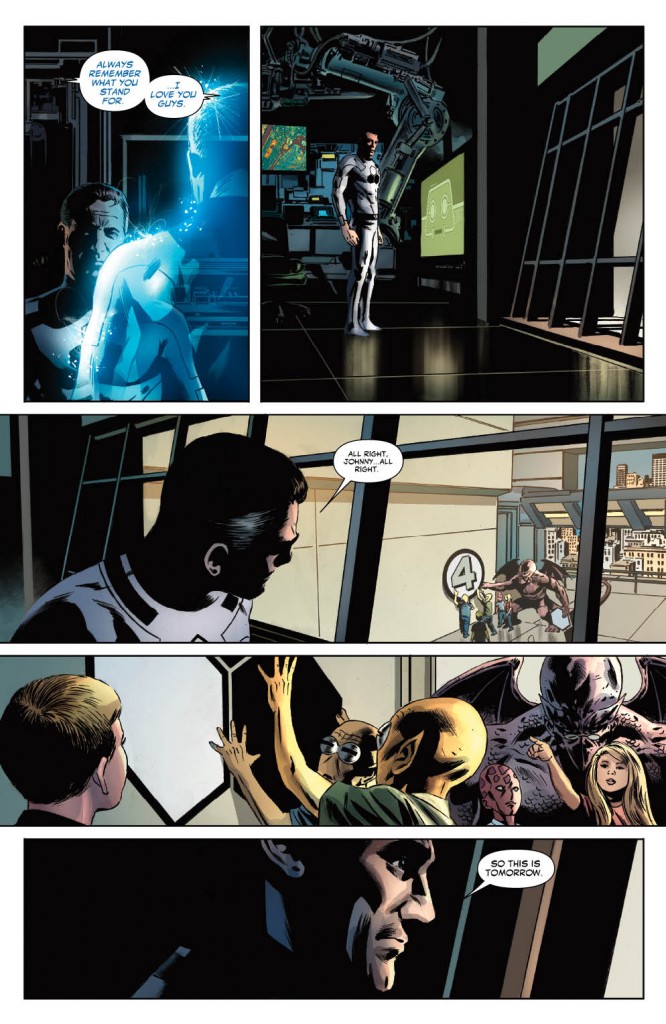 The Pretty, The Pretty Pictures

The artwork was quite good. Epting’s pencils are well detailed regardless of his work on any of the characters involved in the issue, buildings, or machinery. Each panel is nicely drawn and intricately put together. Despite uninspiring panel composition, the transitions between the panels themselves almost make up for the relaxed page layout. There are some good examples on the first page as we watch Reed viewing Johnny’s final message to the family. It begins with Reed sunken back and leaning to one side of the chair, focusing in on Reed’s eyes in the panel directly below it. Next are three vertical panels that incrementally zoom in on a holographic projection of Johnny, ending finally on the following page with a final image of the hologram from Johnny’s back with him in the foreground, Reed facing the reader from the background.

Epting offers another example towards the middle of the issue after Spider-Man arrives. On these pages Spidey attempts to talk to Ben who’s sitting in his bedroom still recovering from the loss of his friend. In the first panel Spidey waves to Ben from outside his room. In the next panel Epting draws a close-up of the grim, saddened look on his face, pulling away in the following panel to show Ben slamming the door shut on Spider-Man. The page ends with a sullen Ben sitting on his bed in the dark, his head down between his legs. Epting is solid all-around here, ending the issue with a great image of Dr. Doom.

The only other point worth mentioning are the new uniforms, which although simple and sleek, could perhaps represent a new outlook on superheroism from the team. The uniforms themselves are either mostly black or mostly white, with the ability to shift back and forth between the two depending on the wearer’s desire. The transformation itself is minor but nice. Each of the First Family’s uniforms bears three hexagons in the form of a triangle, with certain hexagons shaded white depending on the character; Reed’s is the top, Ben’s is the left, while Susan’s is the one on the right. Spider-Man himself has a similar uniform without a hexagon, and can shift between a white costume or a black costume similar to the character’s classic black costume. Regardless, the new uniforms are pretty cool and they’re an interesting departure from the classic FF blue uniforms. 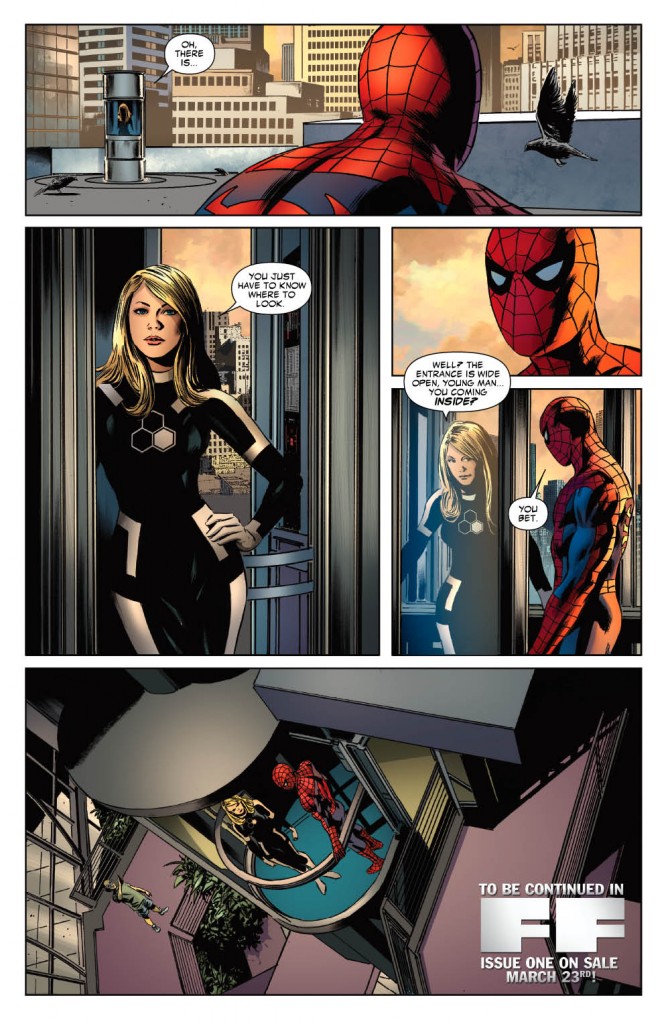 As a whole I thought this was a strong debut issue for the new FF era. The tone of the issue seamlessly transitions readers of the Fantastic Four series into Future Foundation, allowing it to organically feel like an actual continuation of Fantastic Four while adeptly working as a new series on its own. The opening page opens with a video hologram of Johnny Storm presenting his final wishes; this offers all the background information new readers need by bringing forward the crux of how we came into this new era. Hickman simply pulls off the transition very well, while Epting complements the script with the accompanying artwork.

The two most notable additions to the book are the inclusions of Spider-Man and Dr.Doom to the team. As alluded in the final Fantastic Four issues, Hickman hints at a deeper capability for Spider-Man to directly relate to Franklin on an emotional level based on their shared experiences in losing uncles. I think Spider-Man on the team is a brilliant move as he will be in a position to impart some of the lessons he drew from his uncle regarding power and responsibility to Franklin, one of the most powerful mutants in the greater marvel universe.

This was a strong debut issue for the team and I think the book offered on first read enough that warrants following through to the end of the first story arc.