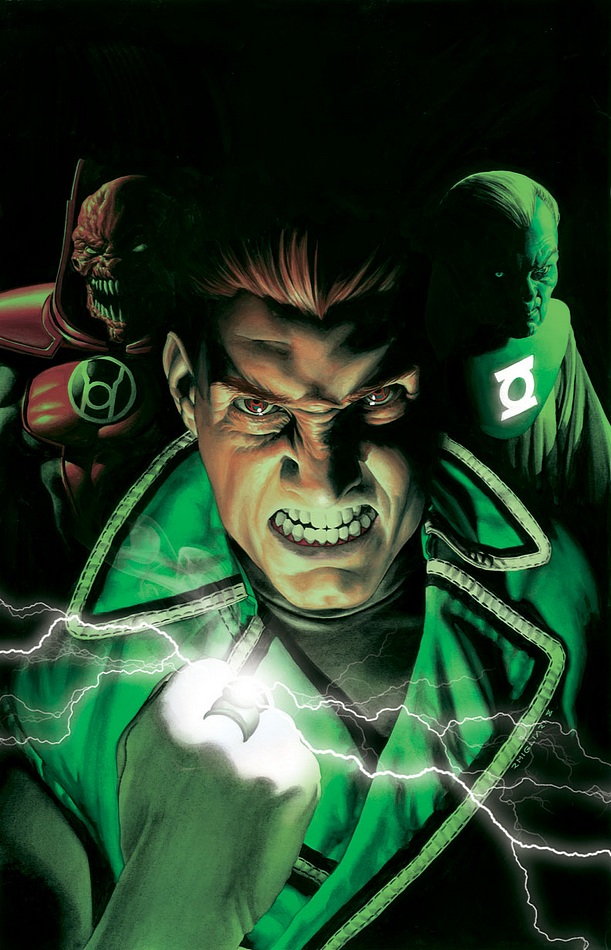 It’s Christmas time in Green Lantern land! Okay, so it’s the middle of August and not very festive at the moment, but Green Lantern fans have been given the gift of a third monthly title to absorb and feast upon. Even still, the pages are decked with green and red lights, and it’s only a matter of time before Atrocitus and the title’s star Guy Gardner deck each other. Does it happen in the inaugural issue? Let’s take a gander. 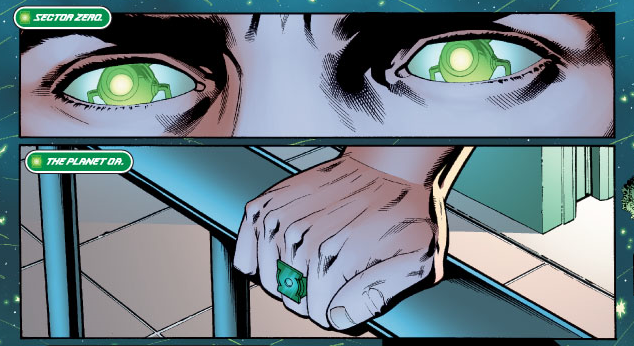 He’s cool, he’s awesome, and he’s the greatest Green Lantern ever. Just ask him. Emerald Warriors stars longtime ring slinger Guy Gardner in his own solo title complete with an ensemble of Green Lanterns appearing throughout the pages. Fresh off Blackest Night, Guy and the former guardian of the Corps Ganthet make a pact with the leader of the rage fuelled Red Lantern Corps, Atrocitus. What’s the nature of their agreement? Only time will tell.

The issue begins focused on Guy’s eyes as he stares out from his quarters’ balcony on the planet OA, watching thousands of green lantern rings fly off in search of new bearers. Walking back inside, his uniform materializes upon his command as he continues his video diary. Life as tenuous as it is, he’s seemingly unsure of how much longer he’ll be alive. Feeling the need to document his thoughts, he continues his monologue knowing that the task he’s undertaken may be his last.

At a moment’s notice, he flies off after receiving an alert from his ring about a ship carrying stolen cargo. In typical Guy Gardener fashion, he blasts through the cargo hold once he arrives and makes it clear he’s perfectly okay with lightly bruising their posteriors with his foot. After taking a few names, the smugglers are carted off in a green caddy wagon construct and taken back to OA, the Lanterns’ home planet. Before he leaves the sector though, he looks off into the uncharted regions of space, areas where no Green Lantern patrols.

Once back on OA, Guy meets the Guardians in their planetary citadel and argues in favour of charting those uncharted sectors and shining the green light in them. The Guardians agree to his request, and charge him as the project’s head. Flying off, he confidently smirks at the ease the guardians agreed with his presentation. 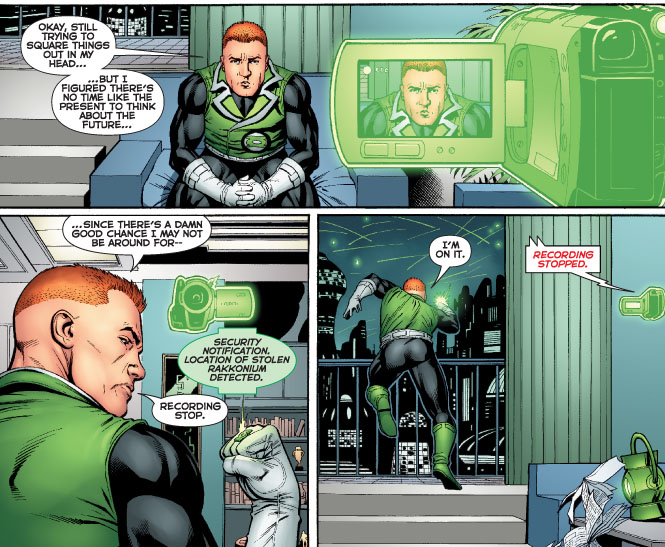 He arrives later deep within OA’s planetary catacombs where he meets Ganthet, who had been examining the Black Lantern’s Book of The Black in search for answers about how Blackest Night’s events came to pass. Sure that the seeds of the Corps’ destruction have been deeply planted, Ganthet pledges to continue to scour the catacombs in search of answers. They fly off together talking about the uneasy alliance they have with Atrocitus, but not before burying the Book of The Black.

Speaking of tall, red and scary, as Ganthet and Guy fly off, Atrocitus performs one of his prophetic blood rituals while speaking with Bleez, a fellow Red Lantern. The mutual distrust between Atrocitus and the Green Lanterns becomes very evident. He doesn’t trust them, and they don’t trust him. Even still they need each other. Atrocitus sends Bleez to the uncharted sectors of space to assist Gardner. Gardner’s plea to the Guardians earlier in the issue was clearly part of their plan.

Towards the end of the issue, Gardner resumes his video diary. We join in progress as he’s finishing what he seems to believe is his final entry. He vaguely hints towards what he, Ganthet and Atrocitus have planned, and only asks that whoever follows him and watches this video digs deeper than what they’re told; nothing is what it appears to be. He signs off, but not before blood begins to trickle from his mouth, and his pupils dimly glow redder as the red lantern symbol materializes.

Being unfamiliar with Pasarin’s artwork, I wasn’t sure what to expect initially. The first couple of pages are fairly standard with Guy sitting in his quarters completing a video diary entry. It isn’t until he flies off in pursuit of some smugglers that the art truly shines. Once he does, he punches through the side of the ship confidently and defiantly as only Guy Gardner can. As soon as he enters, a countdown clock appears where the smugglers have ten seconds to surrender. As time ticks, the action scenes become more grandiose, with Guy giving chase riding a motorcycle construct which he flies directly through the ship’s hull. For his finale, it’s batters up as Guy creates a batting helmet and king sized Louisville slugger to smash the pudding out of the assailants as the game clock hits zero. In a great two page spread, he simultaneously smashes their ship and entraps them in force fields, showing that despite his antics, he’s a swell guy. 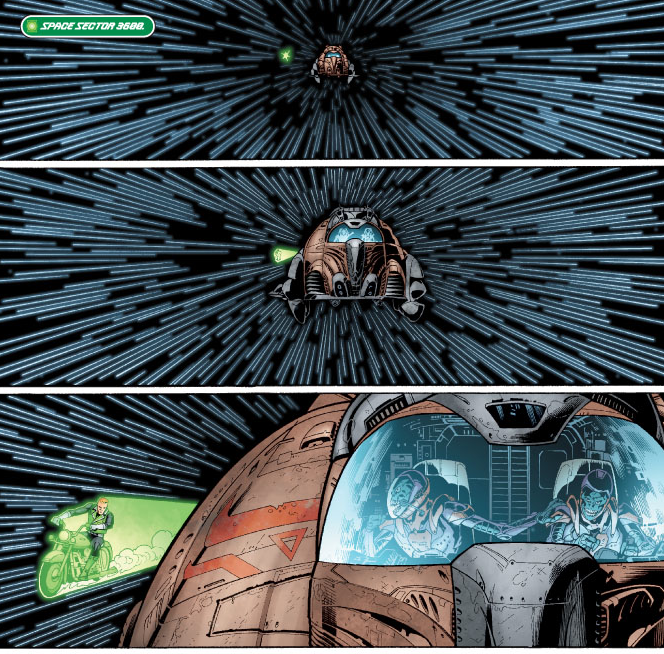 rom here though the art becomes fairly average again. I did like however some of Pasarin’s minor nuances he added to the scenes, such as Guy’s aforementioned smirk behind the Guardians’ backs as he flies off, or how after his presentation to them, he creates a reclining Lay-Z-Boy and kicks back while they make their decision. Those minor touches really jive with Guy’s classic characterization. As a bonus, the dumbfounded look on his face once they agreed with him was priceless.

The action-less scenes feel somewhat lifeless though, which granted isn’t easy just because it’s that much harder to make something standout when the scenes depend on minor character nuances. Pasarin did this in spurts this issue, and did it reasonably well. It’s definitely something I can see him improving upon, while the action scenes themselves are nearly there. There was some great use of the green constructs in the issue, with Guy using the ring to close the Book of The Black with two green hands, or

creating a large jackhammer to create a hole to bury the book in. Scattered throughout the book are some great visuals, and I hope to see the same standard of artistry in future issues.

Emerald Warriors had its share of highs and lows. The most glaring problem with this issue is its presumption that readers picking up the latest issue one of a green lantern comic are keenly aware of the stories that led up to it. The issue doesn’t really set up or provide context for those readers as to why the partnership between Atrocitus and the two lanterns is of such importance, or what their history is together. There isn’t even an editorial note for readers to reference in case they need a refresher. It presumes that readers will have surely read Blackest Night, and doesn’t care to explain specific connections such as the one Guy has to the red lanterns. The book kind of just leaps into the action with reckless abandonment.

Also, there were short scenes I didn’t bring up in the recap that either should have been expanded on a little, or left entirely to the next issue. For example, a single page was dedicated to Sodam Yat falling from the Daxam sky and subsequently dragged to safety by some of the planet’s inhabitants. We quickly leave it though, which I don’t think serves the reader much or the issue as a whole when you only offer a quick one page teaser and then move on. The second omission I made was the book’s ending where it appears a second Green Lantern Corps patrols the unknown sector, pledging allegiance to another Guardian who looks like a cross between Bulphunga and Despero. 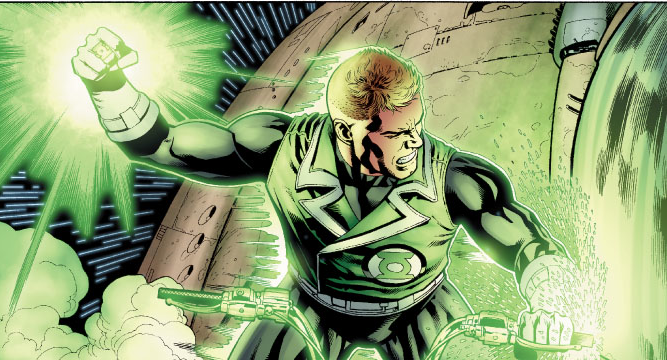 Where the book succeeded was its writing of Gardner. After writing him for over three years in Green Lantern Corps, Tomasi has a great grasp of how to write Guy. It’s no less clear than in the pages where he collars some smugglers or arrogantly creates a reclining chair after arguing with the guardians. Guy is supposed to be this brash and arrogantly confident character. Where the characterization really shines though are the personal moments the character has to himself, both on the balcony at the beginning of the issue, and during both video diary sessions. In those scenes we see a more introspective, reflective, vulnerable Guy Gardner. Despite his public persona, this is the man himself beyond the brashness and arrogance. And this is what makes this a compelling character, that very dynamic and balance between the two halves of the character’s personality.

Tomasi set the foundation for his story and hints at what will develop over the coming issues, setting up the continuation of Sodam Yat’s story, while also bringing in these other Green Lanterns and their guardian. The issue wasn’t earth shattering by any means, but it was a solid effort nonetheless. The mysteries behind the Green Lantern-Red Lantern alliance, the unknown sector, and what exactly is happening to Guy arouse enough curiosity to bring longtime readers in for a first read, but I’m not sure it’ll be accessible for newer readers for the reasons mentioned. Only time will tell if the book develops and maintains a standard of high quality beyond the novelty of it being a third Green Lantern monthly title. 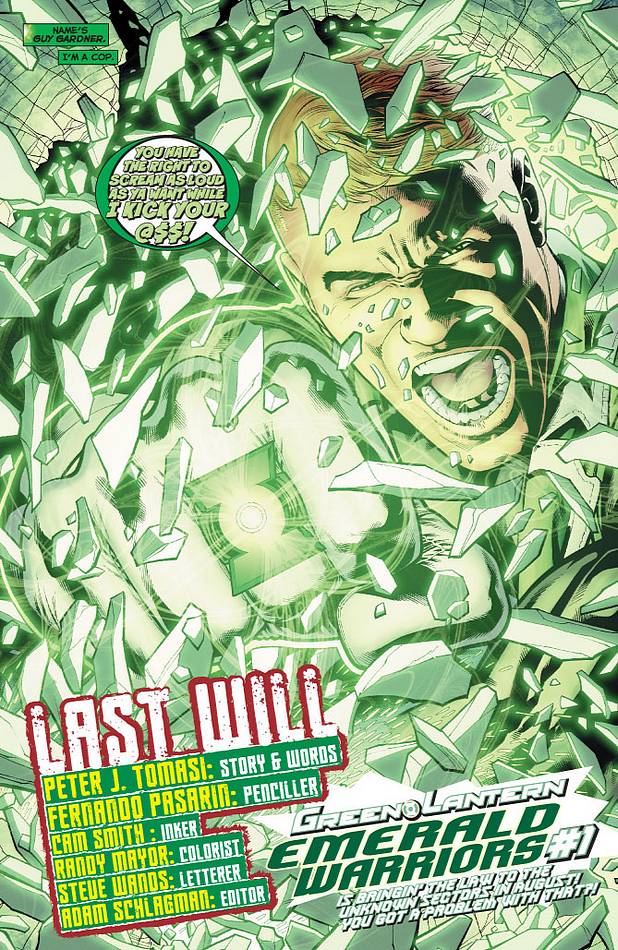