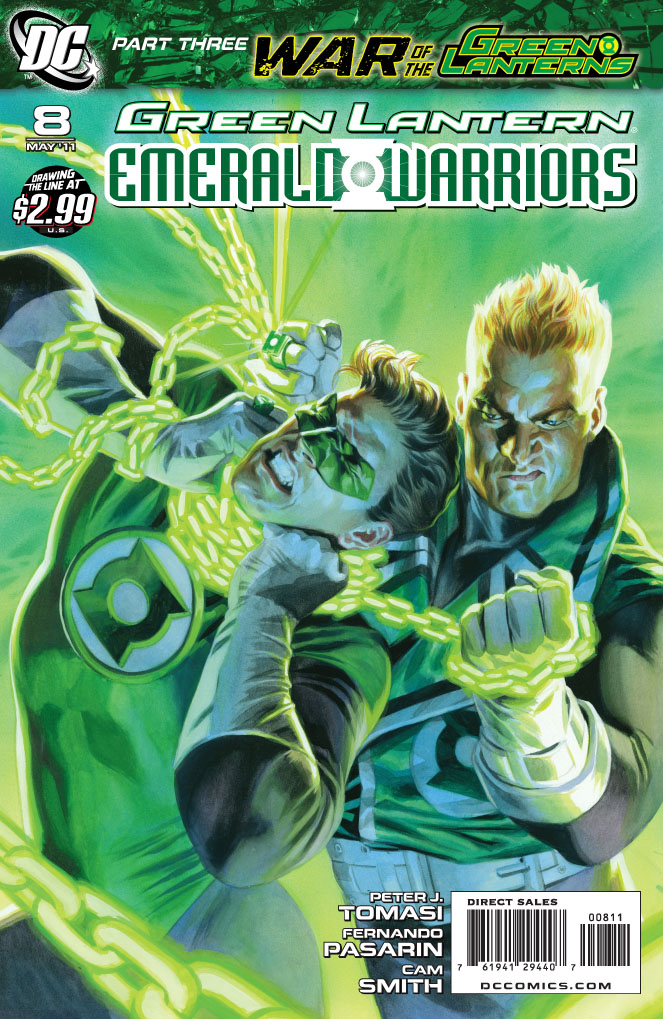 Here we are Green Lantern fans! Part three of the War of the Green Lanterns, and Guy Gardner is pushing forward in his quest save the Corps from itself. Now with a breaking development in Krona’s war against the Guardians and the Corps, Guy teams up with others Corps members to chart their next steps while trying to stave off their worst fear: the end of the Green Lantern Corps.

After making a pact with Atrocitus, Ganthet and Guy Gardner fight harder than they ever have to protect the sanctity of the Corps. Perhaps now in their darkest hour, Guy is alone to fight both his own rage while trying to avert Krona’s war against his former allies as it heightens to frightening levels. 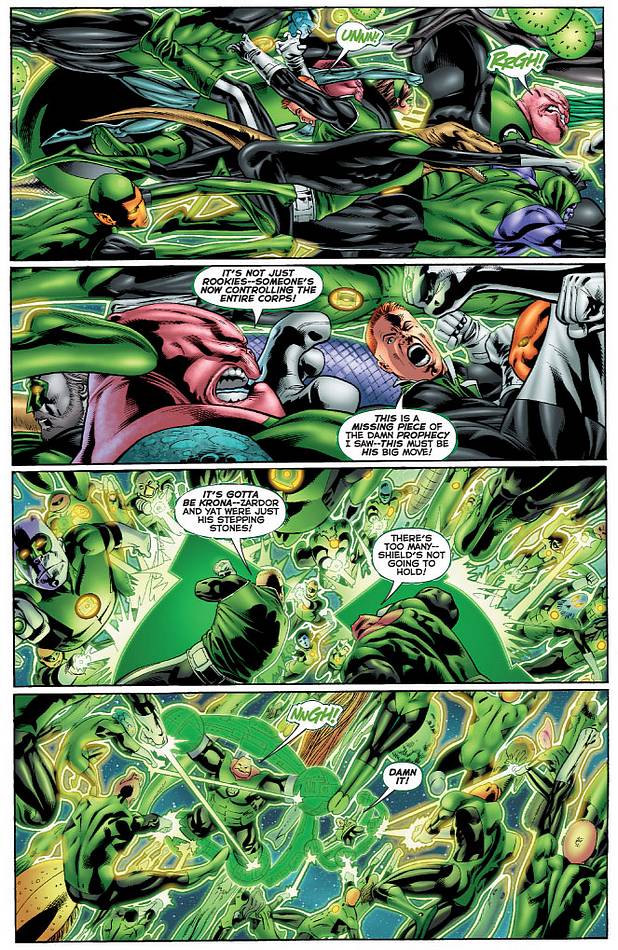 While travelling back to Oa from their skirmish with Zardor and Sodam Yat, Kilowog, Arisia and Guy Gardner are attacked through their rings by the recently re-imprisoned Parallax; Krona had placed the fear entity in the Corps’ power battery. After receiving flashes of Parallax, Arisia is overtaken by the fear entity and flies off towards Oa to meet with the other Corps members also under Parallax’s influence. As Guy and Kilowog watch Arisia fly off, they turn around to see a swarm of Corps members flying directly at them. Lost amidst the swarm of Corps officers, Kilowog decides to stay and help his former rookies, but not before blasting Guy far off into the distance to help him get away from the Parallax-influenced horde.

Once in the clear, Guy attempts to communicate with any of his other teammates from Ganthet and Kyle Rayner, to John Stewart and Hal Jordan. He gets through to Jordan and they agree to meet at the “Green House”, an undisclosed location where the human lanterns previously agreed to meet if they ever needed to regroup. Hours later Jordan and Gardner meet at their rendezvous point where they brief each other on what they’ve been up to and what’s happened to the other Corps members. Their “talk” quickly spirals out of control and devolves into a rematch between the two ring slingers from Green Lantern #25 (volume three). Their anger eventually subsides and they come to their senses. They both decide to take their rings off, fearing that Parallax and Krona will be able to sink their claws into them if they leave them on. The issue ends with them questioning how they’re going to save the Corps. 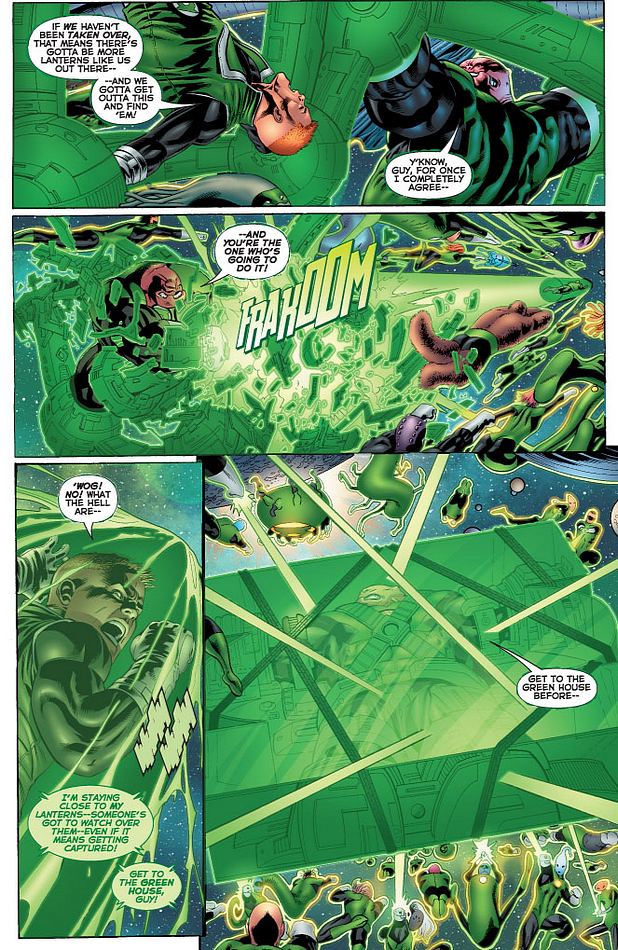 The panel design in the issue is all too basic, relying for the most part on series’ of horizontal panels with sparsely placed squared panels  over the first few pages. There are two deviations: the image of Parallax leaping from their psyches as well as the immense two-page spread of the Corps flying towards Oa. Throughout the book though it’s much of the same and altogether underwhelming. Despite the majority of the book’s layout, towards the latter half of the book Pasarin begins to use two page spreads to lengthen the scenes over both to create a larger canvas for the Gardner-Jordan fight to develop over. It’s minor, but breaks up the otherwise drab presentation of the issue and comes off extremely well.

The pencils are otherwise good. The scenes where the Corps attack Guy and Kilowog are filled with detailed action complemented by fantastic constructs as dozens of characters come alive on the page. Later in the issue once Guy’s construct rocket dies out, Pasarin pencils a series of panels where Guy incrementally becomes angrier, perhaps representing his giving into the power or after affects of the red ring he previously wore. Each offers slight variations from the other, but accurately paints his overall, underlying demeanour. Where the book’s art truly shines though is during the Gardner-Jordan fight at the end of the issue. Pasarin, Smith and Eltaeb combined their efforts to create an epic battle between the two Green Lanterns that dwarfs their previous fight. Every panel from that point  until the final page is a treat to look at. 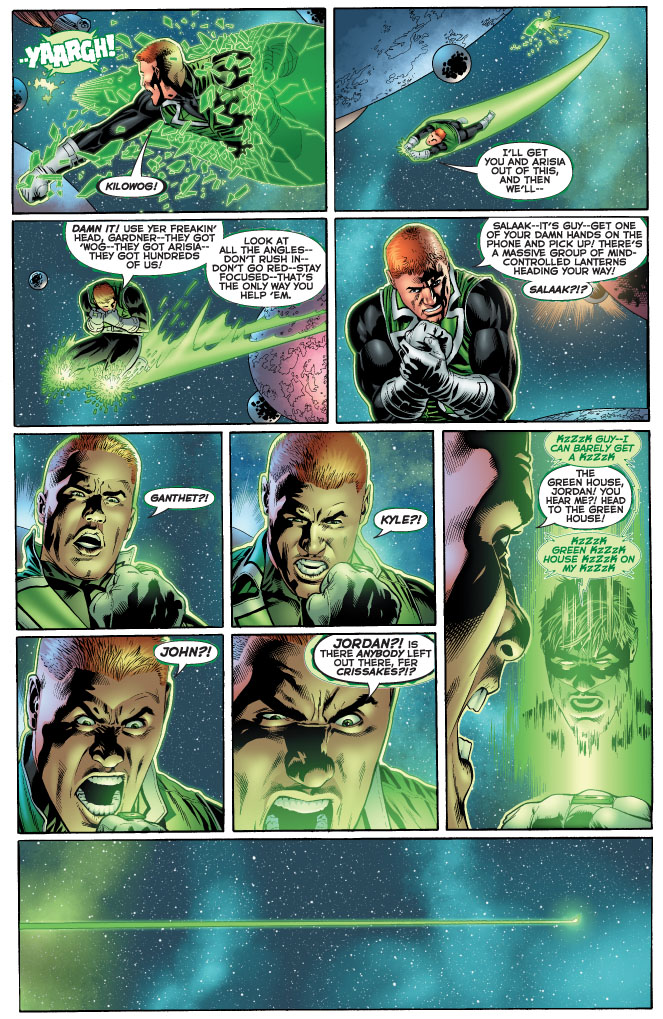 With this issue I feel like the previous seven issues of Emerald Warriors have finally come to ahead to push the War of the Green Lanterns storyline deep into its next stage. Following the Green Lantern and Green Lantern Corps issues released the previous week, Emerald Warriors finishes setting the table for the plot by driving home the immediate volatility of the situation the Green Lanterns have found themselves in. Continuing forward, we find Guy Gardner and Kilowog following the footsteps of Jordan, Stewart, Rayner, and Ganthet as being the sole Corps members to have experienced the taint of Parallax before; this has immediately relegated them as the core six whom know fear and have overcome it. This clearly differentiates them from their teammates who have found themselves under the parasite’s influence. The story aside, I thought the fight between Gardner and Jordan was a nice homage to their previous fight from almost 20 years ago. It was a fun treat for as a long time fan to see round two of their hostilities.

Emerald Warriors to this point has strongly hinted towards Gardner’s greater role in the overall scheme of the story, although it’s hard to predict where the direction of this book will be headed in the larger context now with the blood pact between he, Ganthet and Atrocitus revealed. With that I feel like the book lost some of the initial intrigue and mystery I felt it had after the first issue. The veil has been pulled off so to speak. Together with the other two titles though this book is an essential piece to the greater story which at least for now maintains its position among readers in terms of importance. The story as a whole has certainly become more interesting now that the four earth lanterns have de-powered their rings so as to stay off the radar from Krona. At least in the short-term with all of this going on the book is essential regardless of whether you’re a casual or avid reader of Green Lantern. Yet in the long-term once this story has concluded I’m not sure what will be done with Emerald Warriors, or whether the book has the ring-charge to last.