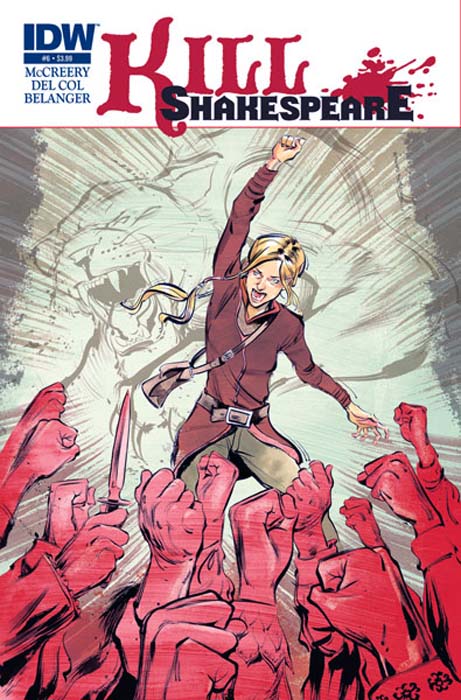 It’s been some time since we checked in on Kill Shakespeare, IDW’s Shakespearean tale of betrayal, drama and comedy. I suppose that goes without saying though, considering it’s Shakespeare. The last time I took a look at Kill Shakespeare was way back in issue two. I wish I had a witty intro for this, but alas I don’t. ‘Tis tragic. In the meantime, lend me your eyes.

Hamlet and Juliet ride like Bonnie and Clyde against the villainous forces of Richard and the treacherous Lady Macbeth as they search the world for its most wanted man: William Shakespeare. As both sides try to track him and his infamous quill down, Juliet attempts to launch a revolution against Richard. Aided by Hamlet and her friends, they plan to overthrow Richard, all the while he and Lady Macbeth hatch a plot of their own.

As the issue begins, Lady Macbeth resumes her creepy, conniving demeanor. Standing with the three weird sisters around a pit, the four gaze visions of Hamlet, making it clear they have little intention of informing Richard of the budding alliance between Juliet and Hamlet.

While maintaining their standard of creepiness, over at the Midsummer Night’s Dram Iago and Othello continue their bickering while Juliet and Falstaff decide the Dram is a prime location to gather the townspeople. After infuriating Othello he storms off, leaving Iago with Juliet. Iago explains why Othello left, as Juliet tells him if he wishes forgiveness he must be “true to thyself”. 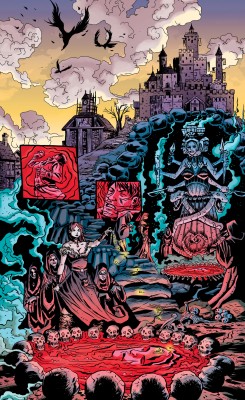 After wandering about, Juliet and Falstaff stumble upon a sleeping Hamlet inside a barn. Initially concerned he’d been followed, Juliet reassures him he’s free to move about upon his own will, but should pay the townsfolk back for their lodgings. Juliet also makes note of a young lady named Adriana who fancies the dear boy.

In the fields, Juliet and Hamlet get further acquainted with one another. Adriana comes up to them and greets Hamlet, asking him to stay a few days for the end of the season harvest. Hamlet smoothly passes on her advances, and she leaves in a huff. Juliet and Falstaff jokingly scold him on his ways with women. Hamlet then contemplates the path his life has taken, feeling he’s lost his way.

Later, Juliet meets a mass of townspeople within the Dram, discussing a revolution against Richard III. After venting concerns, the townspeople agree to join her cause, much to the impress of Hamlet. They’re interrupted by Richard’s men who begin terrorizing the town, among them Adriana. Hamlet leaps to action and saves her, while Iago convinces Othello to untie him. Othello warns him to be true for once in his life. They successfully fight side by side to defend the town from Richard’s soldiers; later they celebrate their victory but honour their fallen friends. Juliet and Othello discuss Iago, feeling he’s finally perhaps earned their trust.

There were no horses, so the art was fairly top-notch in this issue.  The ravens were kind of okay.

Throughout the issue, Belanger brews up some pretty great work from opening page to final toast. If you haven’t opened an issue of Kill Shakespeare yet, the one thing you’ll find common are the unconventional, almost unusual page layouts. The first page of this issue is a great example, where Lady Macbeth and the three weird sisters gather around a large bubbling pit, displaying the entire landscape both above and underground, the page leading your eye downward into the caverns where Lady Macbeth and the three stand. As an added touch 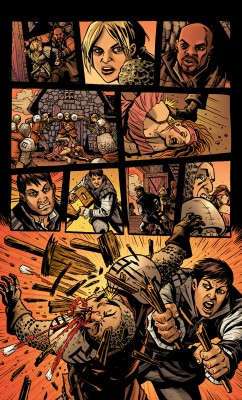 to the page, we see visions from the pit, a reddish display of Hamlet moving about under the watchful eye of the Lady. Similar techniques are used throughout the book, and they work well. Another great scene features Lady Macbeth and Richard in bed, where the lower panels move along sequentially, while the top half shows the entirety of their room from one wall to the other.

The best scenes are saved for the chaotic battle towards the end of the issue where Juliet and her forces battle Richard’s. There’s so much action going on, and usually in such a page the attention to detail suffers. Here though, you’ll notice minor little things like a reflection in a sword, a smattering of bricks as one soldier’s noggin meets a wall, or when Othello sends another whistling through the air. Maintaining the book’s knack for gruesomeness, Juliet displaces pieces of a soldier’s mind, simultaneously giving him a piece of hers.

Altogether the art is very consistent, very graphic, and takes a different approach to panel layout I’ve not seen with any regularity; a welcomed switch from some books which still take a by-the-numbers approach. There are even minor little nuanced touches like Juliet blushing when talking to Hamlet that just add to the overall picture.

The story appears to be moving into the next stage. With the revolution on the cusp of spilling over into Richard’s backyard, the story is picking up after setting all the major pieces into place throughout the book’s first five issues. Kill Shakespeare is becoming more about a hero’s journey as we see Hamlet develop beyond rampant self-doubt and more into the leader he’s prophesized to be. Similarly to any other Shakespearean play, we’re starting to see more shifting alliances throughout the book, with double and triple crosses becoming common. 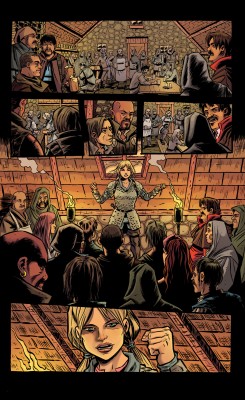 That archetypal journey is a fixture, as we’ve watched Hamlet develop over the first half of the story from uncertainty and self-doubt towards a more heroic, confident icon within the larger story. I wonder though what twists will turn the young Prince before the story see’s its end. This is a Shakespeare tale after all.

Beyond eventual doom, the book is maintaining the typical qualities of Shakespeare, fusing tragedy, love and comedic wit together with good storytelling. The result product creates and cultivates the most interesting piece of this story. It’s the same as I pointed to before, that McCreery and Del Col have created an entirely organic universe featuring the Shakespearean characters, and it’s cool to see characters like Hamlet and Juliet interact, or to see Iago and Othello interact once again. It’s a universe unto itself, not dissimilar from any other. It effectively creates its own cohesive continuity while paying homage to the original works.

Now half-way through the story and only just picking up now, the book still has plenty of time to develop and build off the foundation established so far. Considering the book has been great to this point, there’s much to look forward to.