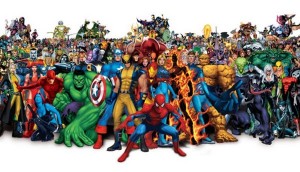 The digital age is upon us, or so I have been told. I must admit that when I first heard that comic books were going to be online for viewing in digital format I was pretty skeptical. I found it strange to think that someone would want to read comic books without being able to hold one. That tactile experience, I thought, was an essential part of reading comic books; however, I put aside my judgement and decided to investigate further.

Marvel took the lead in championing online comic books. DC is only starting to catch up and both companies have very different business models. DC comics only offers a set price for each book (about $2 per issue), while Marvel offers both a set price for downloadable new comics and has its Digital Comics Unlimited service. It is the Digital Comics unlimited service that really shines and what I will be talking about in this article.

The service costs $10 per month or $60 per year (I bought a year membership) and gives me access to over 7000 different issues from the Marvel library. The books are a minimum of 6 months old and the majority of the titles comes from the last 10 years or from the 1960s. You never download anything (you read it all online using flash) and I can log on to any computer anywhere there is an internet connection. It will not work on the iPad due to Apple’s irrational hatred of all things flash. Thanks a lot Jobs. Anyway, I now can read as many comic books as I like for an entire year.

Reading comics online actually works really well. With a click of a mouse I can advance from panel to panel. You don’t get the same experience as if you had the comic in your hands but you get a good comic book reading experience. So have I stopped buying comic books at my local comic shop? In a word, no. In fact, reading comics online has caused me to buy even more in a shop. First I should mention the incredible value for money that the Digital Comics Unlimited is for the comic book aficionado. Remember the more you read the better a deal $60 per year becomes. But it will be argued that it is only a good deal if you would have purchased the comic book anyway. Fair enough. For some time Chris Owen (you can read his blog here) had been telling me that the Ed Brubaker Captain America was one of the best comic books out there. Fifty-Six issues are available online and they would have cost me about $225 if I bought them all in issue or trade paperback format. Now I had to read them much later than everyone else who bought the monthlies, but I got to experience the great story for about $1 per issue. And anything else I read is basically gravy. 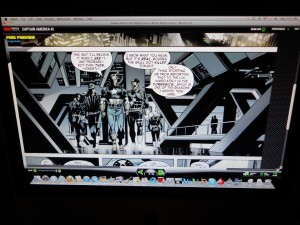 My “gravy” so far has been the new Hulk series, a bunch of Dr. Strange mini-series, all the Annihilation books, and the first Runaways series. If I never use my Marvel Digital subscription again, it is good until June, it has been well worth it. These books were not ones that I normally collect, and since I, like many of us, do not have the finances to purchase every single book I wish to read this is a great way to supplement my comic book addiction.

In addition, the Brubaker Captain America series caused me to pick up Secret Avengers, so now I have a new series added to my pull list. Reading comics online will cause fanboys to buy more comics, and those who wouldn’t buy monthly comics can still enjoy all the great stories from the House of Ideas. The Digital Comics Unlimited service will not replace comics books, and by extension brick and mortar stores, but will only enhance the reach of the industry by providing customers with more options. I would recommend the use of Marvel Digital to anyone and there are quite a few free samples available online at the Marvel Website.

And DC better get their act together. You don’t have to be second at everything guys.