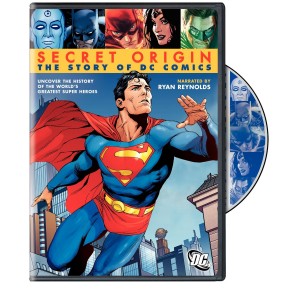 I love documentaries; and a documentary about the history of DC comics sounds right up my alley. Secret Origin is narrated by Ryan Reynolds and interspersed through his narration are excerpts of interviews done for this doc by key figures like: Len Wein, Neal Adams, Geoff Johns & Marv Wolfman.

Secret Origin opens with brief bios of the owners Malcolm Wheeler-Nicholson, Jack S. Liebowitz & Harry Donenfield, who combined their respective companies to form Detective Comics. They wanted their company name to evoke the changing urban environment of New York City. With street crime on the rise, the name Detective was meant to be dangerous and exciting.

It then hops into the origins of DC’s trinity of characters; Batman, Superman and Wonder Woman, showcasing some interviews and testimony about them. Watching this, I have to say that Bob Kane really was an odd person. His interview clips showed him dressed up as a Bruce Wayne wannabe in a cigar jacket and he spoke like a caricature of a stuffy rich man. We also learned a few things about Wonder Woman’s creator, Dr William Marston. While I already knew about him being into the dominatrix scene, I didn’t know that he kept a mistress in the same house as his wife and that he had children by both while all living together. Interesting but completely insane!

It’s a very dynamic documentary as the clips keep on changing rapidly with the narration, drawing your eye to very high res, cleaned up images of the comic characters. After the introduction of the trinity, the documentary leaps into the Golden, Silver, Bronze, and finally the modern age. It does a good job highlighting the social context of each era and how comics reacted. We go from the formation of the Comic Code Authority after the Senate hearings to the social revolution comics of Green Lantern and Wonder Woman in 70’s to the dark and gritty comics of the early 90’s. They did a pretty good job of covering this material, even admitting that the comics they produced after the induction of the comics code were crap compared to the books Marvel were putting out, which kind of takes balls when it’s a documentary about DC by DC. The interview with the originator of the Wonder Woman revamp into Diana Prince/Wonder Woman, was pretty funny too. The creator realized that though he tried to make Wonder Woman a feminist icon, he turned her into a depowered woman who relied on a male mentor, I-Ching, for guidance. Whoops?

Overall, this was a well done documentary that never slowed down a beat. The documentary doesn’t get too in-depth and comic obsession DC fans like me probably already know most of the information, but to anyone wanting an entertaining overview of DC, there are tons of cool facts presented.