One of this summer’s biggest blockbusters (and biggest financial disaster) is The Lone Ranger.  This movie has been plagued with poor reviews, and has virtually disappeared from the box office.  It is a movie I wanted to see on the big screen, and luckily enough I was able to find a theatre that was still screening it.

The Lone Ranger is about a lawyer named John Reid.  He returns to his childhood home, where his brother Dan, is a legendary law-man.  The construction of the Trans-Continental Railroad will bring prosperity to their town.  But with that prosperity, there also comes vice and lawlessness.  John Reid comes into town via train, but Butch Cavendish, a wanted criminal is a prisoner on that train too.  Butch Cavendish’s gang try to free him from his captors.  The only man to stand in their way is John Reid.  The only man standing in Reid’s way, is a Comanche tracker named Tonto.  Little do they know the adventure that lies before them.

Cavendish escapes.  Dan Reid forms a posse to go after him.  John joins the posse to see that justice will be served.  But an ambush kills all of the Texas Rangers in the posse.  Tonto finds the murdered posse, and is able to bring one of them back to life.  John Reid… The Lone Ranger.

Then The Lone Ranger and Tonto head on an adventure to see that the evil-doers will be brought to justice, and the old west will be saved from villainy. 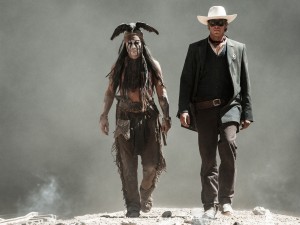 The Lone Ranger had everything I was looking for in a big summer movie.  Lots of action and adventure.  Lots of laughs.  And a good story featuring interesting characters.  It isn’t a great story, but it is a very solid origin story for the Lone Ranger.

Visually the movie looks amazing.  There are times where the special effects take over and the realism is lost, but this is a beautiful sweeping western showing amazing locations of the old west.

The one thing that impressed me most with the Lone Ranger was this wasn’t a gritty re-imagining of an iconic character.  There are too many movies right now that re-envision a character with realism and drama.   The Lone Ranger revives the fascination of the old matinee westerns, that we’ve heard about when we were kids.  Obviously many of us were too young to experience the old B-movie westerns of the late 30’s and 40’s.  But the Lone Ranger takes back to those days (much like Indiana Jones did of the old adventure serials).

The Lone Ranger also delivers by including the iconic symbols and sounds of the classic character.  He dons the white hat and mask (which he wears for most of the movie).  He carries a silver bullet.  We even get to hear the “William Tell Overture” which was the theme song from the classic TV show.  These points weren’t changed for the sake of change.  We expected to see them in the movie, and the producers delivered.

I highly recommend seeing the Lone Ranger.  It is a fun filled adventure.  I also recommend taking the family to see it.  There are some graphic scenes (so use your discretion) but no more gruesome than Amazing Spider-Man or The Dark Knight.