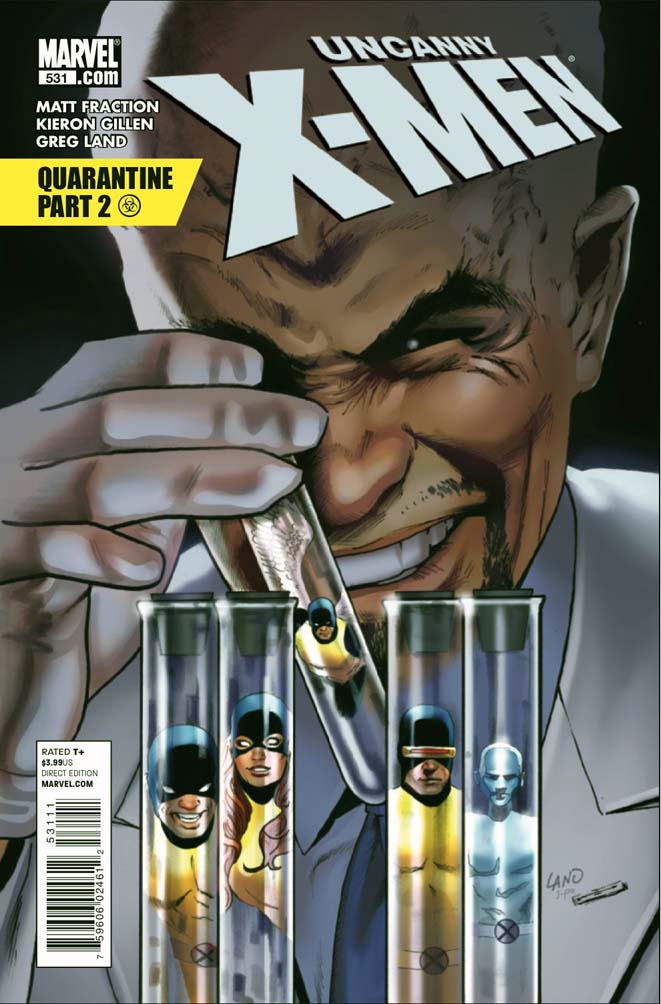 With the mutant flu ravaging Utopia, can Cyclops and the rest of the X-Men recover in time to deal with Mr. Lobe and his mutants? What’s the connection between them? Is there one? And what’s with the X-Men’s malfunctioning powers? So many questions, so many questions. Pull up a chair ladies and gents! 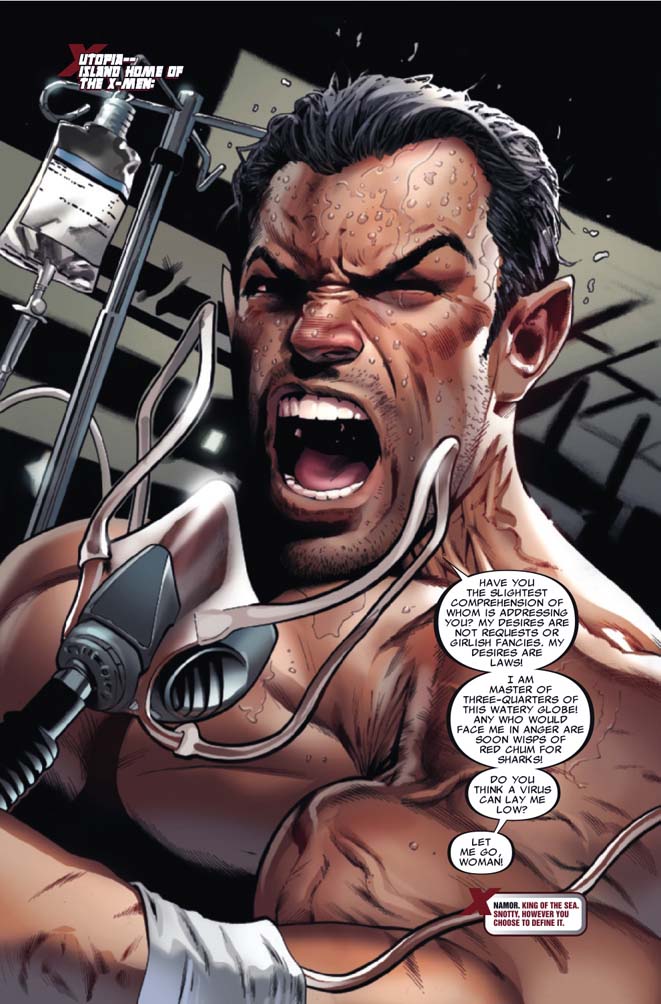 Now taking residence on the former Asteroid M off the coast of San Francisco, the X-Men continue to adapt to their lives in the wake of Hope’s return to the present. Never entirely free from a new threat, they now face another in the form of a virus targeting their mutant powers. Meanwhile, a new player in town named Mr. Lobe is attempting to give mutant powers to human beings in the name of overthrowing the “monarchist era of genetic privilege” and bringing forth the first “democratic mutants”.

After ordering Utopia’s quarantine, Cyclops continues to keep the island under control while the mutant flu runs roughshod throughout the X-Men’s ranks.  Anyone with a mutant gene from Cyclops to Namor, up to and including Wolverine are bed ridden. Meanwhile on the mainland, the X-Men who have not yet been exposed to the flu arrive too late as the X-imposters beat them to the scene of a crime and clean-up before they can bat a lash. After fleeing, the X-Imposters are the subject of a toast from Mr. Lobe, who wishes to end the monarchist era of genetic privilege by giving anyone who wants mutant powers the opportunity to have them. While all this is going on, across the Pacific high above in Chinese airspace, Emma Frost, Kitty and Fantomex attempt to rid themselves of Sebastian Shaw once and for all. Frost allows Shaw to regain his wits in an attempt to shed light on her past for Kitty. After a brief history lesson, Fantomex purposely allows Shaw to fall through the ship’s hull much to the dismay of Emma Frost. She scolds him immediately. Hurtling through the air, Shaw eventually lands hard in a field. The force of his fall activates his powers, bringing a mess of new problems to Frost. 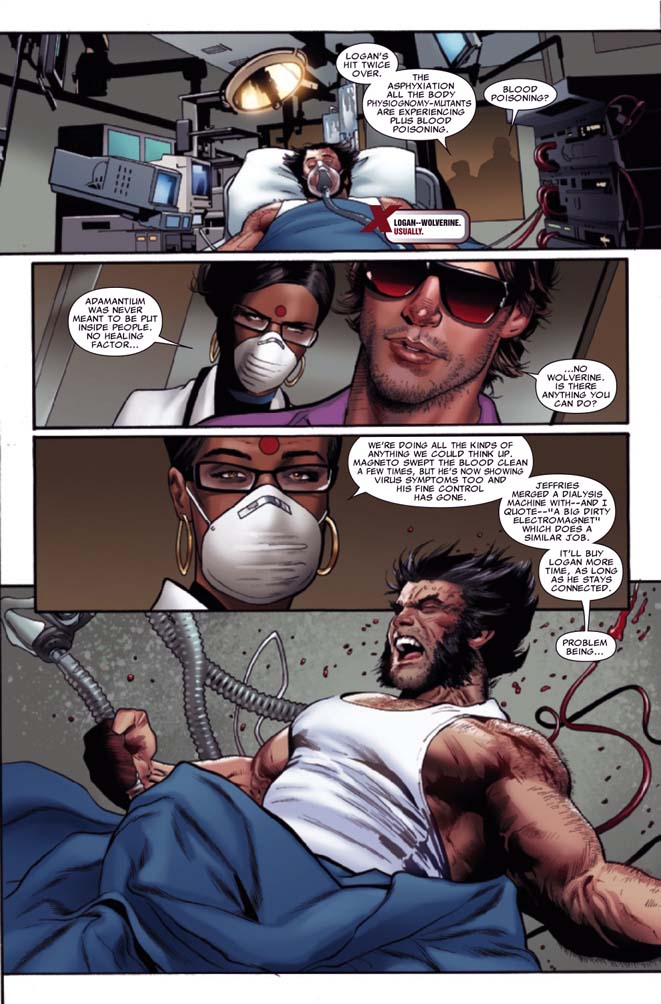 Land’s artwork continues to be a welcome vacation from the Dodsons’ horrifically bad art from the last year. From the beginning of his work on this book, including this issue, Land has put forth some highly detailed character models. There’s a great example not two pages into the issue where we find Namor stricken to an infirmary bed, angrily fighting Dr. Rao’s order to stay put. That anger is nicely captured by Land and accentuated by Ponsor’s colours on the first page. On the following page, we can actually see the effects of the flu on the Atlantean King, as a thick coat of sweat covers his body with beads of it dripping down his forehead. We see a similar effort several pages later with Wolverine. In both cases, Land and Ponsor do a great job. Later on, there are also some great scenes in the pouring rain, inclusive of a street brawl and Storm’s arrival onto the scene with nature’s fury in tow. The reader can see rain droplets bounce off the characters’ bodies or dripping from their faces. One other great scene depicts Sebastian Shaw violently beating and killing potential queens of the Hellfire club in a flashback panel. The brutality of it is nicely captured both in the intensity of Shaw’s stature and the splatters of blood flying in all directions.

Beyond these mentions, the art is otherwise pretty basic work. The pages follow a formulaic rectangular panel layout for most of the book, with quite a few “head bleeds” from one lower panel into another directly above from it. I feel like that technique was overused, and should have been used more sparingly.  There was also one minor gaffe during the crime scene panel where Angel is speaking with Cyclops and he’s drawn smiling a huge grin. It doesn’t really sync up with the speech at all, and simply looks goofy. The overall work is quite good, but these issues are somewhat glaring, albeit minor in some cases. 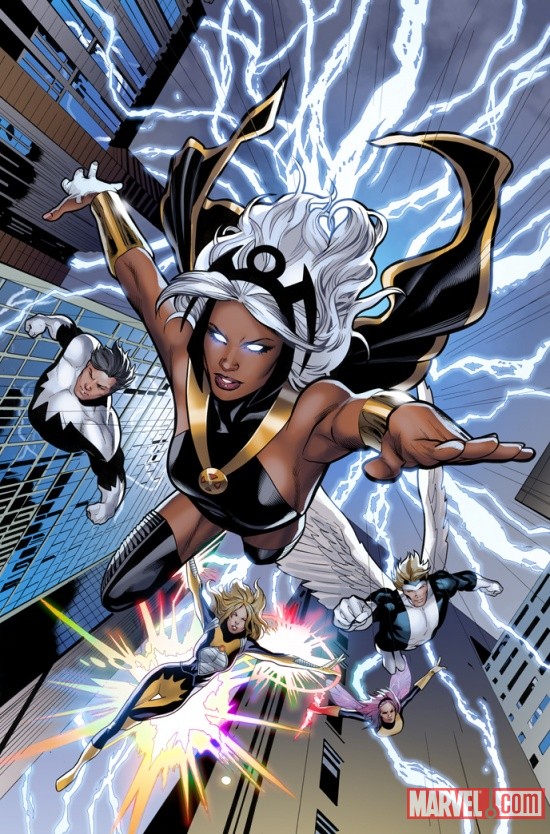 I’m torn on this book’s direction at the moment. After the huge build-up to Second Coming over the past few years, a decompression period is always welcomed from such an event. This book feels like it’s not going anywhere though. What’s worse is that Fraction is practically ripping off the barely readable “giving regular people powers” gimmick from DC’s 52 series from several years ago. Even the concept of borrowing character code names such as Angel for Warren’s female counterpart is being used. I feel like this is very lazy storytelling for someone who has been consistently good throughout his run on Uncanny. In fact, I’m disappointed with Fraction’s work with this arc entirely because there’s absolutely no originality to that piece of the story. The wrinkle of adding the mutant flu to the mix does add another dynamic to the story as to its origins (which are probably Dr. Lobe), but that’s the only thing saving the story from completely copying its DC counterpart.

The Emma Frost side-story however is much more interesting. The character’s desire to eliminate her past and have Kitty understand her better has ultimately led to the release of her life’s black mark: Sebastian Shaw. Now that he’s back into the population after his incarceration on Utopia, one has to wonder how Emma will respond in future issues and what lengths she will have to go to eliminate the threat he poses while keeping Cyclops in the dark as to her little operation. That does pose some interesting story elements for the future, although we may not see them right away, if not until Marvel’s fear event kicks off in the spring.

The story is partially readable, although its lack of originality and my feeling that nothing of consequence is really going on yet since Second Coming ended hurts the book. It unfortunately feels like this book is using filler stories and rehashed concepts to tide over fans until the next big event.