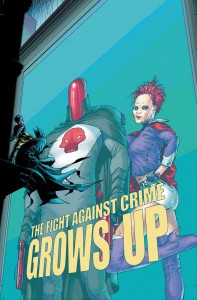 I’m very protective of Batman. It’s a problem I have as a person that I really think I should get checked out. You see I honestly believe that Batman is one of – if not THE – best literary character of the 20th century. I realize that it’s a fairly lofty statement, but I truly feel that Bob Kane and Bill Finger’s creation can stand side by side against Sherlock Holmes, Philip Marlowe, The Lorax, Joseph Kavalier and Dr. Robert Langston (Where we see art – he sees conspiracy!)

Which is why I kind of adore the concept that he’s ‘dead’ and we’re seeing someone else don the cape and cowl. What Morrison is showing us a different aspect to the caped crusader than we’ve seen in a very long time. Sure, it’s because it’s no longer Bruce Wayne under the tights – It’s Dick “Robin/Nightwing” Grayson. But in showing us how someone else handles wearing the mantle of the Bat.

It’s a pretty daunting task to follow up Frank Quitely. He’s a brilliant and inventive artist (check out his use of Eisner-ish sound effects) who often goes above and beyond what a script demands – especially when he collaborates with Morrison.

I wasn’t all that familar with artist Philip Tan. I’m not a Green Lantern fan so I missed those issues, and while I usually enjoy Rucka’s work I was left sort of cold on Final Crisis: Revelations. So not really knowing what he was capable of, and knowing that no matter what happens – how do you top Frank Quitely(?) I came in with low expectations.

Well, I guess I didn’t really need to. Tan brings his ‘a’ game. The opening few pages are inventive and exciting using clear and crisp storytelling skills. the Red Hood and Scarlet are a menacing pair though the few scenes where pathos is involved Tan’s use of facial expressions actually got a bit of a reaction from me. Morrison seems to be having a ball too, I mean – when the Red Hood is preparing his tone for his official press release to the red-herring (? maybe ?) of Oberon Sexton.

While Morrison is always on his best when dealing with Batman, this is one of the few series that I can honestly say that we’re dealing with a classic. (I think Brubaker’s Captain America run was the last one I said this about.)