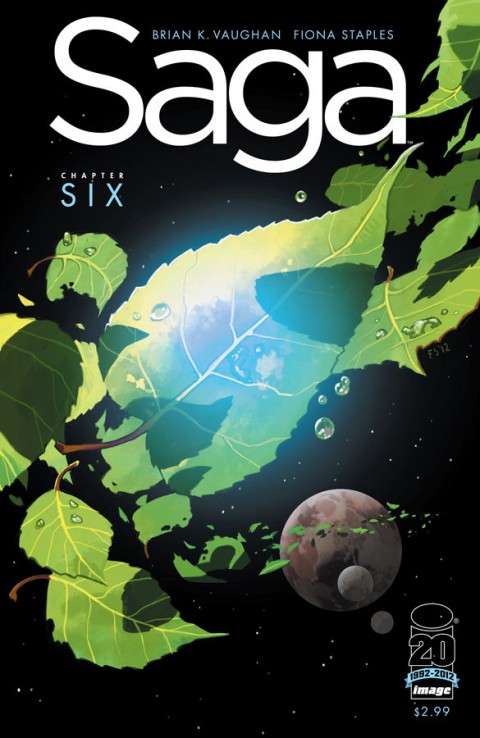 If any comic book writer has the résumé to be so bold as to title their comic, “Saga,” it would be Brian K. Vaughan. With a bibliography including Runaways, Ex Machina, Pride of Baghdad and Y: The Last Man, and a number of Eisner awards to his credit, Vaughan has a remarkable body of work thus far, and Saga is no different.

With the sixth issue the first part of Vaughan’s story concluded, bringing the first leg of Alana, Marko, Izabel and Hazel’s journey to a close. With the quartet still on the run from both their worlds, Marko and Alana frantically search for a means to escape from both their civilizations so they can live happily ever after with their daughter, Hazel. If you’ve yet to pick up an issue of Saga, the first thing you’ll notice is the organic interactions between the characters which is ripe with smart, witty dialogue containing definable identities for each character through their speech. Each character feels as though they have their own voice, and that comes across in how Vaughan writes and presents conversations between a given character and another. His storytelling allows for the characters to breath and develop naturally, and avoids having them fall into a static, cardboard-like disposition. The interplay between Izabel and Marko is quick and dryly funny, while the very symbolic moment where Marko sacrifices his blade is contrasted by Izabel and Alana’s. The pair share a moment of awe upon Marko’s noble act, only to have Izabel bluntly ask Alana whether she was ditching her raygun, to which she replied, “not a fucking chance.”

What’s additionally interesting in Vaughan’s technique is his decision to narrate the story by the presumably grown up Hazel, as though she were recalling these events in hindsight. It adds a measure of insight into how the story ends; we know she survives, but are unaware of how she impacts the galaxy nor what happens to Marko and Alana. That in itself is interesting, as it reveals part of the conclusion in such a way that it pushes you as a reader to continue on because you want to know how it all ends. Knowing that one single sliver of information is enough to spur that intrigue, and in this, Vaughan is a master.

Fiona Staples’ art is amazing. Pencilling, inking and colouring the entire issue, Staples treats readers to imaginative, expressive and interesting artwork that inspires the same measure of awe one would experience if they were to see a giant wooden rocket ship. Her command of shading and multi-layered environments range from the dark recesses of a swamp-like landscape complemented by the silhouettes of Alana and Marko in the distance, to the inspired immensity of the aforementioned ship in the night sky as two moons orbit around the planet. Her talent further shines in the page where Marko shatters his blade; an amazing blue energy envelopes the page with unmistakably brilliant colouring. Her work is completely consistent throughout, further inclusive of the wooden ship as it blasts off leaving a trail of green flame behind it, or the final melee to conclude part one of the series.

Vaughan’s space saga features characters that are fun and loveable, combined with the hard-edge any would have if fighting for love or their children. This story features such a tale, one of two people of opposite races uniting in love despite the unruly social despotism and intolerance of their respective races. Out of this chaos comes a child, a child of both cultures. Vaughan’s Saga offers a lesson in standing together and uniting against commonality, and that as the characters have shown over the course of the series, there’s more to existence than the hedonism and decadence of contemporary society. These characters are sensibly rooted in clearly distinct ethical foundations, and that is what makes them compelling from the impassioned Marko and Alana, to the conflicted but altogether honourable The Will, and inclusive of the as-yet-to-be fully introduced Hazel. Saga is a title worthy of its name, whose scope will only expand as this tremendously well-scripted story unfolds.