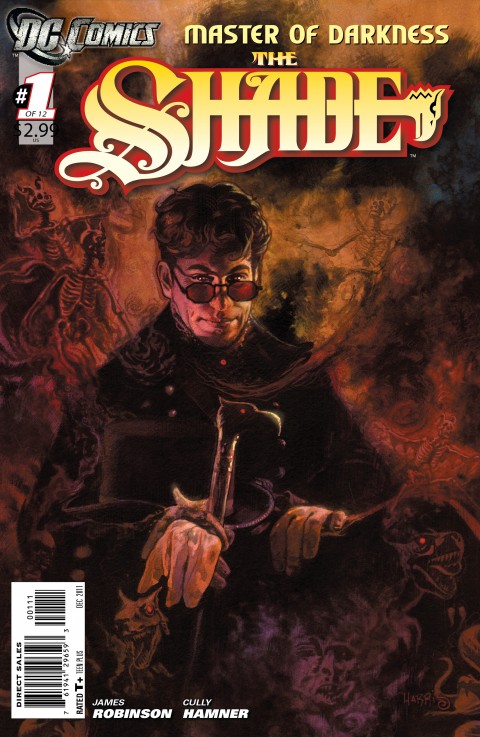 The first issue of Shade hit comic book shelves last week, very likely under the radar amid the trove of titles that included Buffy the Vampire Slayer, X-Men and Green Lantern. The book, penned by James Robinson, features the mysterious mystic known as Shade. The book at least to this point has been confirmed as a 12-issue maxi-series, but has been promised to be home to a fair number of surprises throughout the series, one of which calls this issue home.

In 1838, a mystical event rendered Richard Swift as an immortal with the ability to manipulate shadows into hard constructs, while drawing his powers from the dark realms home to energies that rival those of the gods. He is the Shade.

Sitting atop the balcony of his Opal City flat, Richard Swift, better known as Shade, sits with Mikaal and enjoys an afternoon tea while reminiscing about the month of his creation, his genesis. They speak of love and loss, a conversation that extends too long as their teas cool. Shade strangely suspects a disturbance and offers to put another pot on while one of his allies, William Von Hammer, fights for his survival elsewhere as a group of Belgian assassins chase him across a series of rooftops. After discovering their purpose, Von Hammer resolves that he must warn Shade of his impending danger. After tea, Swift meets Hope, his love, for an afternoon “meeting.” They part after a lengthy discussion; she implores him to find the man he used to be, which Swift quips will surely lead to his ruin. After they part, Shade takes a stroll in the park under the moonlit sky. He stumbles upon Deathstroke, who assures his presence is strictly for business purposes, which Shade presumes means his own forthcoming death. He quickly defeats Deathstroke, but is alarmed to discover another’s presence once his hands are sliced off by the real Deathstroke. Reiterating his decoy’s comment about the business meeting, Deathstroke proceeds to gut Shade and then decapitate him, leaving his body mutilated in the Opal City park, presumably much to the approval of Slade’s employer.

Upon hearing the premise of this series, I was confused as to how it was going to be executed. It’s only after reading this first issue that I began to understand the character and how precisely the series may play out. When the title was first announced it was stated the series would uncover the origins of this mysterious character by employing story lines centered in the present in conjunction with flashback arcs that will work backwards towards explaining how Swift became the Shade. We see hints of that story device in this issue, as Robinson’s Swift hints towards his past and the melancholic state of his immortal existence. This is complemented by Robinson creating a smarmy, adventurous, arrogant tone to the Shade; someone who seeks adventure and loves to tell the tale, but also as someone who has experienced the inherent loneliness of immortality, humanizing the Shade more with each sombered piece of text. What’s peculiar is the ending of the book, clearly depicting Shade deceased. Whether the panel is one of Shade’s tricks, or if Deathstroke was able to kill him, resulting in the story then working backwards, is unclear. I presume the story to be a little more intuitive than that, and considering Robinson’s track record, it would seem this book could deliver as a sleeper hit of the DC relaunch.

Although not familiar with Hamner’s work, I feel like his pencils and inks nicely fit the tone set by Robinson’s writing and that of the character itself. I feel this is especially the case towards the end of the book in the Opal City park scenes. The darker landscape really lends itself towards Shade’s melancholy while dually mirroring his own powers and their origin. His work otherwise nicely reflects the general attitude of Swift in instances where he is sitting on the balcony with Starman, his conversations with Hope and again in the park scenes at issue’s end. The final panels between Deathstroke and Shade were nicely done as a series of violent panels where Swift is overwhelmed by the one-eyed mercenary. Every gory detail is captured from his hands being lopped off, to his head being removed swiftly, to how his corpse is displayed on the ground as Deathstroke walks away from his target. Hamner is a great fit for this series and I look forward to more of his art as the series moves forward.

Having no expectations for this book or the character, I was pleased with Robinson’s effort and his ability to create a certain air around the character that is intriguing and surrounds his story with enough mystery to warrant continued readership. The story, unlike many of the other books out as part of the DC New 52, relies more on the mystery surrounding the character than a forced gimmick or concept. Perhaps more than the other offerings, this is a very character driven book that hooked me in from the opening pages and left me wondering in the end, considering the ending itself, how the story continues, what the breadth of his powers are, and how the story will unfold moving forward. Shade was a pleasant surprise, and one which I would recommend reading.