There have been very few titles that have caused as much of a stir as Superior Spider-Man. I wanted to wait a bit before writing this review so that it wasn’t necessary to plaster spoiler alerts every second sentence, but in case you don’t own the internet or haven’t read Amazing Spider-Man #700 I will warn you: this article contains spoilers.

When we last left Peter Parker his mind was trapped in the dying body of Dr. Octopus and with his last breath he manages to transfer some of his thoughts into the brain of Octavius (who was in Peter’s body). I know that it all sounds très Days of Our Lives but it is actually a pretty solid story. The Villain formerly known as Doc Ock is affected by this transfer and vows to carry on as Spider-Man, albeit a superior one.

The issue starts off with the new Spider-Man taking on a new Sinister Six composed of the Shocker, Beetle, Speed Demon, Boomerang, Overdrive (in the Big Wheel), and the Living Brain. The new line-up is an intentional grouping of B (possibly C) list villains and even Otto can’t help but comment that “they are letting anyone call themselves the Sinister Six these days”. Superior Spider-Man then has preliminary battle the new six (and demonstrates some new tech) and saves a policeman while the criminals get away. We then get to see Ock’s interactions with Mary Jane and his colleagues at Horizon Labs before a final battle with the Sinister Six in which he almost kills Boomerang. He is about to beat the man to death but his hand is stayed by the Ghost of Peter Parker, who is keeping an eye on Octavius and will ensure that he doesn’t besmirch the good name of Spider-Man. Peter Parker is still a character in the story and even though no one else can see or hear him (except the reader) he will have a huge impact on the way that the saga of the Superior Spider-Man develops. And yes, I’m fully aware that having a ghost of Peter Parker follow Dr. Ock around sounds terribly silly but trust me, it somehow works. 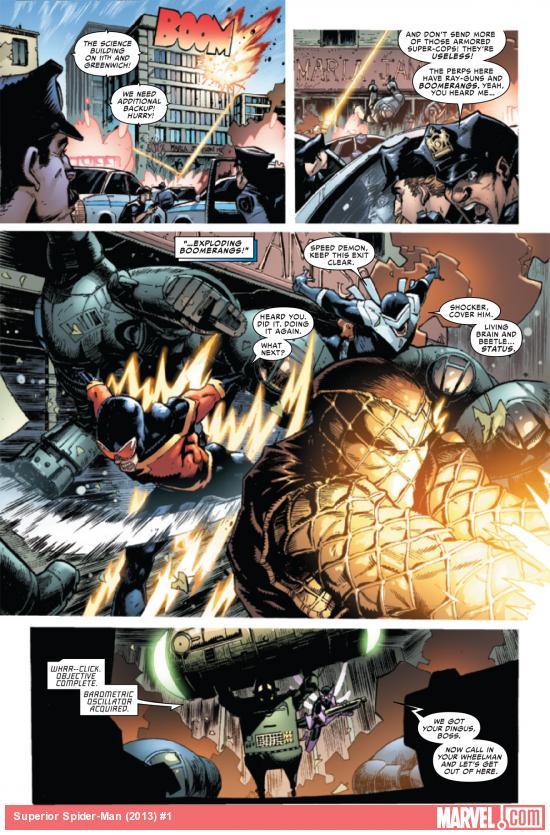 Ryan Stegman does a great job on the pencils and really shines during the fight scenes. Fluid choreography during a multi-character battle isn’t easy to pull off but Stegman is in his element. The entire creative team is giving it their all and the book is a polished work and welcome edition to your Marvel Now! collection.

I do think that the issue leaves even less doubt in my mind that Superior Spider-Man is a temporary series that will end in about 6 months to a year after a big Peter Parker comes back from the dead story that will see a relaunch of Amazing Spider-Man. Which I will then review in similar fashion.

The bottom line is that you should ignore the hate and petulant reviews, Superior Spider-Man is a fun read and an interesting chapter in the character’s history.