Which is why I ask: You Want 2nds? 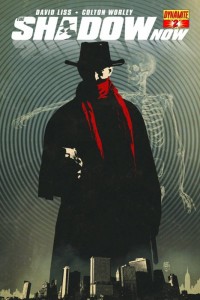 Let me give it to you straight: this is actually an old menu item spruced up to give it a more of that nouveau cuisine feel. I don’t know what it is about chefs. They just can’t be happy serving up classic dishes that have stood the test of time. They think they gotta put their own stamp on it.

And talk about a classic! The Shadow is one of the all-time great characters from American fiction. He first appeared as a mysterious presence on the radio show “Detective Story Hour” in 1930. He was HUGE! I mean like Lady Gaga/ George Clooney/ Avengers movie huge. Next thing you know, he’s heading up his own magazine, a series of books. This spooky crimefighter with the ability to “cloud men’s minds” was PERFECT for radio and print, where the listener/reader filled in all the visuals with their imaginations.So of course, the next logical step was to put him into comics.

Take it from me, LOGICAL ain’t the same thing as SMART.

It doesn’t work. How to you show ‘clouding men’s minds’ (aka Being Invisible) in comics? How do you portray him controlling the thoughts of others? The character’s greatest strengths in radio and in books and magazines, became his greatest liability in visual media.

You want proof? In comics–

You want more proof? In movies– 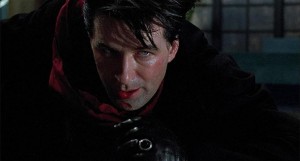 Maybe, MAYBE, the Shadow works in comics when you treat it like a period piece. Set it the 1930’s. Denny O’Neil and Mike Kaluta had some success with it. 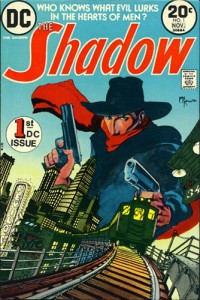 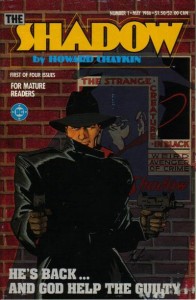 And Dynamite brought the Shadow back in some good issues (thanks Mr. Ennis). 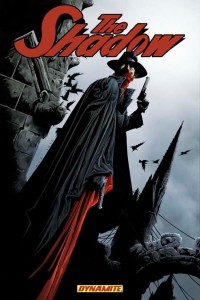 So what do they decide to do? Bring him into modern times, of course.

A really good dish is all about presentation, so let’s talk about Shadow Now #2 and it’s presentation

Colton Worley’s approach is very photo-realistic. TOO photo-realistic. Except for Lamont Cranston (who is a dead ringer for Schmidt from “New Girl”), all the characters look the same…because in real life REAL people look the same. Comic book art needs to be heightened realism. Realism cranked up to 11. This comic looks like Worley posed all his buddies for a photo, and apparently a majority of his buddies are heavy-set guys with well-trimmed goatees and pork pie hats. 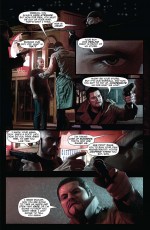 It’s the posing part that really takes away from some nice looking rendering. Every panel is static and boring with no energy. Worley has wonderful technique but this is supposed to be sequential art. There is no sequence. No connection from panel to panel.

The similarity of characters and lack of connection makes it almost impossible to follow the story. I’ve seen more flow of action in my Great Uncle Arnold’s photo albums. The only time anything moves is when the Shadow falls over in an alley.

Of course, calling this character “the Shadow” is misleading, because this is NOT the Shadow.

I’ll give David Liss the benefit of the doubt. Maybe Dynamite told him: “Okay, we’ve got this Shadow character. Nobody will make a movie out of comics set in the ‘30s. Too expensive! Lets put him in OUR time.”  I know what it’s like when the Powers-That-Be dictate a premise to you.

But why jettison the very things that made the character enduring to BEGIN with?

PAGE ONE: Caption of Shadow thinking: “That plan’s pretty much down the crapper”

Excuse me? “Down the crapper”? That’s not the Shadow, that’s Adam Sandler. But there’s a BIGGER problem:

David, buddy, do you have any concept of what this character is about? He is a creature of mystery. Not only a mystery to the other characters in story, but to us, the audience. He always has been. Is he really this gun-toting wrath emerging from the darkness? Is he Lamont Cranston? Is he Kent Allard? Radio listeners, magazine readers, book readers were all fascinated because they DIDN’T have insights into his thought processes. The Shadow has hung around for 75+ years not only because he could cloud criminals’ minds, but the audience’s minds as well.

This isn’t the Shadow. It’s Richard Castle in a red scarf.

It’s not a lost cause. The concept of the Shadow fighting crime in our era is a cool one. It’s that whole “fish out of water” thing.  “Mork and Mindy” wouldn’t have lasted two episodes if Mork had come to Earth from Ork and had acted like every other Earthling. Use Shadow’s old school outlook and perspective to comment on today.

PLEASE make this book work. I want to read THAT book. We need the Shadow to come to our reality and have an impact on IT. Not the other way around.

I give it one and a half KETCHUP PACKETS.