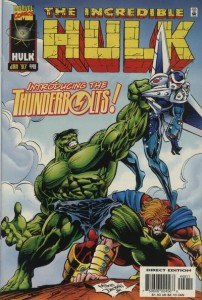 The 90s have been underrepresented in the Spotlights, only 1 of my last 22 featured a 90s book, actually I think I may have done only 6 since the beginning. Surely there are some more tasty clovers hiding in the 90s weeds.

I swear I don’t go around the price guide just looking for 1st appearances and then pimp slapping them onto the Undervalued Spotlight. Usually something in my normal day to day activities bring certain books to my attention, most of the time I just keep moving but now and again I stop and think “hey, this should be worth way more”.

I recently had a stack of Hulks to price up. Easy peasy, especially once you get past #200. Not that many books above #200 avoid the bargain basement so I pulled out my #250, my #271, a few McFarlanes, a few Keowns and there you go.

Then I remembered that there was a Thunderbolts issue up later in the run. That has to be worth money, no? I looked it up and it was #449 and the guide value was only $6. Now a lot of $6 and $7 in the guide Hulks can only sell in the bargain bins but this is not one of them. My Hulk back issue bins never have this issue in stock; it is an in demand comic.

Incredible Hulk #449 of course features the 1st appearance of the Thunderbolts.

I really like the premise of the Thunderbolts. The team was made up of villains recruited by Zemo after the Avengers and the FF fell to Onslaught. Baron Zemo, Atlas, Moonstone, Songbird, Fixer and Mach 1 were the original members. The team acted like heroes to gain the public trust though their secret plan was world domination! A funny thing happened on the way to the Forum though, playing good caught on and eventually the team overthrew Baron Zemo (who apparently was impervious to the powers of being good).

The Thunderbolts as a concept is brilliant. Hope, a second chance, redemption are themes that run through Thunderbolt story arcs. The Thunderbolts are one of the most interesting teams in the Marvel Universe. I’m arguing that their 1st appearance deserves a bit more respect than it is getting.

I had a poke around the internet and saw no real excitement over this book, the last sale was back in May 2013 and it was a CGC 9.6 and it only got $20.

The Thunderbolts are enjoying a new Marvel Now series, actually Annual #1 is just about to come out and it features the one and only Doctor Strange. The current team consists of Deadpool, Venom, Punisher, Electra and Red Hulk, how’s that for star power. The title is selling as many copies as the Young Avengers, Nova and X-Force.

So hear me out. The Thunderbolts are a great concept. The origin of the team is unique and memorable. The current incarnation of the team is loaded with star power. Surely the book featuring the team’s 1st appearance is being overlooked.

This book represents a fun and safe way to play with investment comics. Hunt around, pick up a few high grade raw copies in the $5 buck range and hang on to them for a while. You won’t be able to retire with these but maybe you’ll be able to make a few bucks.

The 43rd edition of the Overstreet Comic Book Price Guide shows $6 as the 9.2 price.