Last week I wrote about spending the day at the latest edition of the Canadian ToyCon.  I had a fascinating conversation with Roxy Lee and Gillian from www.geekxgirls.com.  These ladies take the hobby of Cosplay to the next level.  They are professional Cosplayers. 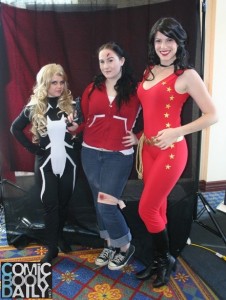 When I use the term “professional” I don’t mean this is how they make their living.  I mean they have a social media presence.  They are well known within the Cosplay community.  They have followers on their Facebook and Twitter pages.  They become an attraction and draw at events like Fan Expo.  But unlike some of the other international comic conventions, they don’t get paid to be in attendance.  Most times they have to pay the price of admission to be there.  So why do they do it?  Because they love it. 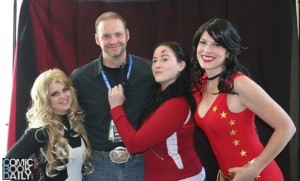 While I was talking to Roxy Lee, she told me she believes that Cosplay is going to become bigger and more popular.  I think that is the case as well.  If you compare Fan Expo now, to Fan Expo 10 years ago, there are more people in costumes now than before.  There is also a larger demand for it too.  www.geekxgirls.com is a popular website, that attracts visitors every day because this is what people are interested in now.  There is a lot of potential right now within the hobby.

Roxy Lee also told me that they have plans for a “crowd funding project” (like Kickstarter or Indiegogo) to raise money to purchase equipment so they can create a “Geek X Girls” TV show.  The idea is to use a similar format to EP Daily or Innerspace where the Geek X Girls would be in Cosplay and talk about topics like Comics, Videogames, Movies and TV.  It wouldn’t just be a gimmick, these girls are passionate about this topic, and they would like to share their opinions.  I think it would be a format that would work and I will let you know when it happens.

Professional Cosplaying can be expensive as well.  Not only is there the cost to manufacture the costumes (which Gillian is a talented seamstress) but there is also the cost to travel to the different shows around the region and the country.  Gillian (aka Gillykins) has attended some of the premiere events around North America like New York ComiCon, San Diego ComiCon and Dragon Con (in Atlanta).  She works full time, so on many occasions she has to arrange her vacation time around a convention, and she also pays for her travel expenses and admission to the show.  There are some instances where she can be an invited guest of the show, but on most cases she has to pay out of pocket to attend these shows.

To help supplement the cost of attending these shows, Gillian and Roxy Lee (and other Geek X Girls) sell photo prints, buttons, cards and other merchandise.  These prints are done by professional photographers and are very reasonably priced.  If you see them at a future convention, purchase a print.  You’ll get an amazing photo and it will help them out.

If you are interested in knowing more about Gillian, Roxy Lee, Gina G and Geek X Girls in general you check out the following links: