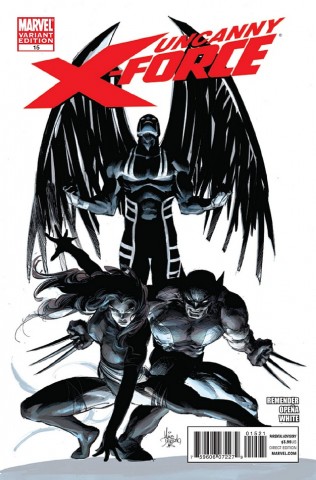 Last week the Dark Angel Saga continued with issue 15 of Remender’s rendition of the X-Force, bringing the team’s dream of saving Worthington closer to its conclusion. What they found once they returned was instead their worst nightmare staring them coldly in the eyes. This week we’re taking a look at the latest issue of Uncanny X-Force.

Once upon a time the team charged itself with killing a young boy destined to become Apocalypse. Upon succeeding, they believed their quest completed. Yet, reality would not have it be so. As it has been throughout history, Apocalypse’s Horseman of Death is destined to become a new Apocalypse, making Warren Worthington next in line. The team went on a frantic quest to find the one thing that could save their friend, but upon returning to their world, they found him to be no more.

Deep beneath the North Pole in Archangel’s Akkaba Metropolis, Psylocke finds herself under close watch as Archangel and his followers prepare to unleash the life seed on humankind such that mutantkind can take its place atop the evolutionary chain. A large dome emerges from the ground and Archangel, along with Dark Beast and his horsemen, enter it. Their plot reveals itself further as they plan to fast forward history to a point of their choosing, drawing ever closer to the door that holds the secrets to changing the universe; where time is relative to the outside world. As they prepare, Psylocke fights back and subdues Pestilence, only to be prevented from escaping by Blob. Back inside the dome, the life seed begins to progress the evolutionary process forward; 130 million years passing by in only 24 hours. The new world begins to take shape, as Archangel proclaims its beauty to Dark Beast.

Meanwhile, Deathlok, Fantomex and Deadpool lounge around and eat cheesy cham-chams as they arrive in Montana where Worthinton’s new world is forming. They land on the surface and make their way through the foilage, but are interrupted by the former Mr. Worthington who subdues Deadpool and then goes off a cliff along with Fantomex, who proclaims any hope of saving Warren is gone. Death and Famine arrive to prevent Deathlok and Deadpool from aiding Fantomex, while Archangel and Fantomex once again engage. Fantomex fires a bullet which eventually connects and strikes Archangel in the head, leaving him slightly hurt. Genocide steps in as Archangel retreats. Meanwhile, Fantomex reunites with Wade and Deathlok to find that they’ve killed Death and captured Famine. As Deathlok interrogates their prisoner, Archangel and Dark Beast sit and discuss the death of Death and his choice for a successor: Psylocke.

The Dark Angel Saga is moving along quite nicely. What I think foremost must be pointed out is that if this change in the Worthington character is permanent, Remender is doing a great job of casting him as the type of character which, despite clearly an antagonist in the story, is not acting villainous solely for the sake of being villainous. I view this iteration of Archangel as very much an anti-hero both in his objectives and in the calm, rational thinking of his plan. I’m reminded of Alan Moore’s Adrian Veidt from Watchmen in how the character is taking shape, as he believes his motives are just. The added wrinkle of including Psylocke as his new Death is nice, although with the post-Schism teasers revealing her to be rather normal, it’s safe to assume she survives whatever Archangel has planned. Still, considering his absence from the Regenesis teasers, it’s safe to assume Archangel’s change will remain post-Schism. I like where the story is going, definitely having improved from the second arc which I found to be terribly lacking. This, combined with a growing cast of co-conspirators, places Archangel in a very dangerous, albeit very interesting place opposite the X-Men moving forward.

Opena’s artwork in issue 15 was simply beautiful. Archangel’s blowing metallic wings on the second page, the abstract nature of the new world as it’s forming once they enter the dome, the preceding panels leading to the encounter between Deadpool, Deathlok, Famine and Death, and next to it, the anti-heroic Archangel gracefully landing with his wingspan at its fullest. Opena’s pencils are a wonder in this issue. Among the rather gorgeous artwork are the final pages of the issue as Warren prepares to induct Psylocke as his new Death. What truly helps the artwork stand out is the colouring work of White who helps enhance Opena’s pencils and give an added jolt of personality. In addition to the story, the art has surely improved over some of the work in the rest of the series which didn’t quite fit Remender’s story. Together Opena and and White produced a visually wonderous, detailed, appealing issue that helped accentuate the overall story.

Remender’s X-Force is hitting full stride, having returned to the strength demonstrated in the first story arc. This arc particularly has taken the series in a completely new direction I hadn’t expected in the outset of the series relaunch. Having Archangel replace Apocalypse and consequently become an enemy of the X-Men adds a very interesting plot point which if it is maintained, provides the X-Men with a new antagonist to their ever growing stable. The additional dimension of it so happening to be one of their long standing, and obviously classic allies, makes it that much more intriguing. I’m very interested in where this series is heading as the Dark Angel Saga continues forward, and especially how this new take on the Worthington character will interact with the X-Men moving forward. As of now, this series is still one of the better ones on the stands and shouldn’t be overlooked.