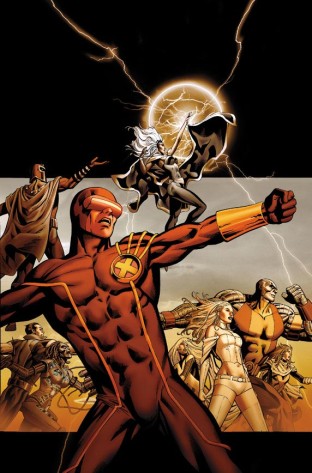 Last week saw the debut of the other crown jewel of the Regenesis saga hit store shelves in the first issue of Uncanny X-Men‘s second volume. Coming out of Schism, the X-Men are left divided into two factions split along ideological lines. Perhaps in a more precarious position than ever before, split between Utopia and Westchester, Uncanny X-Men follows Cyclops, Emma Frost, Magneto, Storm, Hope, Namor and others as mutantkind enters a time of great uncertainty.

With Wolverine taking many of the younger mutants back to Westchester to reopen the school, Cyclops is left with some of mutantkind’s heavy hitters at his side to continue the unendurable fight to preserve mutantkind.

With the X-Men safely in their Utopia stronghold off the coast of San Francisco, tourists read off the San Francisco information brochure listing  some of the city’s more well-known sights; among them the mysterious dreaming celestial. With both gazing at the celestial, Mr. Sinister makes his presence known and promptly, yet quietly, kills them. Meanwhile in the early morning hours on Utopia, Cyclops and Emma prepare to enter a meeting including the new principal players on Utopia: himself and Emma, Magneto, Namor, Colossus and Magick, Storm and Hope. Scott quickly commences the meeting and christens those in attendance as his extinction team. Over several pages the remaining mutants on the island undergo a series of training exercises to refine and sharpen their skills, while Scott and Emma video conference with Abigail Brand regarding spiking energy outputs from the celestial. Scott and his team moves in to investigate the phenomenon. They quickly find that Mr. Sinister is one step ahead of them and has activated the celestial, while Sinister himself escapes leaving the X-Men to deal with the alien entity. It quickly attacks and perpetually subdues both Colossus and Emma Frost, forcing Scott to use Hope to communicate telepathically with the rest of the team. As they begin to gain an advantage, they discover the celestial is transforming into micro-celestials because they lack a central electromagnetic nervous system. Magneto arrives to contain it momentarily, giving Scott and his team time to gain their wits and plot their next move. Meanwhile, in the city’s core, Mr. Sinister lands and uses his technology to transform San Francisco’s residents into his visage: creating a Sinister Wonderland.

Altogether, much like Wolverine and the X-Men, I found that the action was lacking in this issue. Similarly to last week’s big Regenesis release, this issue doesn’t directly address the fallout of Schism. Instead the team goes about its day and addresses issues where necessary. Like last week’s issue, Uncanny prescribes a threat for this team of X-Men to confront and deal with: enter the classic villain, and thorn in Scott’s side, Mr. Sinister. With him out of the game basically since Messiah Complex, it’s rather agreeable to see a more potent threat to the X-Men rearing its head compared to Wolverine’s team dealing with villainous children. I feel like it adds a degree of legitimacy to the book to have that dynamic in place, which is also something X-Men books have really been lacking: an ever-present villain, especially with Magneto onside. I like the current team dynamic of the book as well, with Storm effectively functioning as the conscience of the team, while Hope has fallen in line and does what she was trained by Cable to do. Perhaps more than the Wolverine book, this felt more like recent X-Men books featuring Cyclops. The hallmarks are still present, making this more of an issue #545 than a first issue. Still, I feel like this book has more to offer as we follow mutantkind’s stories.

I really enjoyed Pacheco’s pencils in this issue. The montage page of the primary characters in the book looked really cool and well detailed, from Magneto’s electromagnetic field, to Storm’s lightning, to the power cells and wiring of Danger’s body. The opening artwork of the bay area is quite beautiful as well. Beyond Cyclops, Hope and Danger though, Pacheco’s faces seemed off during the meeting pages, the same facial structure appearing later when Storm enters the battle. Magneto looks very weathered, drawn out and sunken, Emma’s face seems much more rounded out than normal while Storm seems to have larger cranium that forms a triangular shape towards her chin. This only appears in some instances, where in others their features are much more symmetrical. I loved the work involving the celestial, pages which were nicely coloured by D’Armata. While Pacheco laid some fantastic ground work with his pencils, D’Armata hit it out of the park and the page simply looks amazing. Pacheco and D’Armata strike again in the closing pages, featuring some great colours and pencils as Magneto swoops in to hold off the celestial’s attacks using his superbly coloured electromagnetic powers.

As whole books, Uncanny easily beats out Wolverine and the X-Men. The story is better, the artwork is better, while the potential this book has overwhelms the rather formulaic story arcs we can expect from its counterpart. Where we’re going to see education centric stories while battling the new (and rather young) Hellfire Club, Uncanny allows the opportunity to introduce characters like Mr. Sinister who have gone fairly unused in recent years and reintegrate them into the mix. I expect there to be many more compelling stories coming from this end of the X-Men universe, where the practical tone of the book’s realism philosophies force this team to go out and address the threats that threaten their race’s existence. Although the split itself is philosophical, and although I’m sure readers will flock to both books, Uncanny is simply the better book with the greater potential to be successful.