October sales figures just released by Diamond Comic Distributors show DC Comics emerging as the big winner. DC accounted for almost 51% of the unit sales of comic books in comic shops for the month of October, over 20% points above Marvel’s 30%. All the other comic book publishers divvied up the rest.

DC also dominated the dollar share of sales raking in 42.47% of the money spend on comics in October. The dollar gap between Marvel and DC was only around 13% mostly due to Marvel having a lot more titles priced at the higher $3.99 cover (vs DC’s $2.99 on most of its titles).

Of the top 10 selling comics in October 7 were DC titles.

September was the launch month for DC’s New 52 and Diamond’s figures show October sales were up 6.78% over September. We can most likely attribute this to DC’s #2 issues being received well by the market and by pent up sales for #1’s as 2nd and 3rd printings finally made their way to comic book shops.

Even with a strong September and October performance thanks mostly to DC’s New 52 the market for comics and graphic novels is still down around 2% year-to-date compared to 2010. You can expect 2011 to finish even or just ahead of 2010 thanks to what I’m sure will be positive gains posted in November and December.

So has the print comic book industry finally bottomed out?

Can we look forward to stronger comic book demand in 2012?

It looks like 2012 will be a very interesting year.

Diamond’s sales figures are compiled from the 3500 or so specialty comic shops in North America and around the world. The account base includes brick-and-mortar stores, internet merchants and other specialty shops. 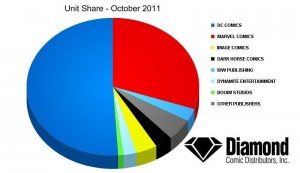 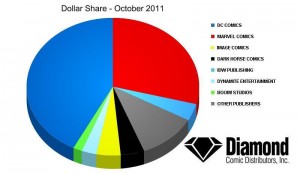