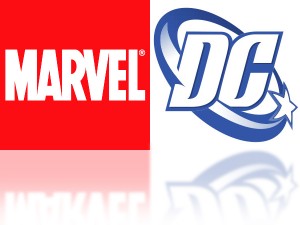 Part of me thought initially that DC’s recent reboot was first born, in preparation for a crossover with Marvel… crazy right?  Marvellous, Marvel’s, magnificent men and women finding themselves in a ‘stand-off’ with dirty DC’s, dangerous, dudes and dames.   I can almost see DiDio, Lee, Morrison and Johns deliberating over a battle with Marvel “pre-reboot” and maybe feeling like – it could almost be embarrassing to go to war in those,  tired old uniforms and… Let’s be honest… kind of tired, lame and almost irrelevant characters (I can say this, as a firm DC guy ;-)).  So – are they preparing for war?

A mouth-watering prospect sure, one that ignited my story-artist mind and got me thinking…

The premise (in a nut-shell):- Doom discovers a way to simulate a worm-whole in domestic space – and is able to manipulate time and space.  During his initial experiments, he inadvertently makes contact with a parallel world and  –  unluckily for us all, he discovers The Joker.   Following a brief investigation of the new world (DCU) his master criminal mind quickly realises a way to rule both realms – and destroy all ‘protectors of people’… the Super humans. *Plot thickener* :- In the 1990’s NASA built a working ‘City-Space-Station’ with (to scale) replica landmarks from Earths greatest cities complete with pocket-atmosphere and simulated gravity,  they used it to test chemical weapons and cutting edge military equipment. Doom plans to hijack the abandoned ‘City-Space-Station’ and manoeuvre it within the co-ordinates of his newly planted worm-hole  –  which, would allow occupants of BOTH worlds (Marvel AND the DCU) to access it.   Doom then co-ordinates a master plot with Red Skull and joker (other villains welcome), to spread the word of an unknown group of Super Villains planning to assassinate the world leaders (in their respective Universes, Marvel AND DC) –  Doom/Joker tell the world (again in both) that the team of Super Villains is being put together on a ‘city-space-station’ in domestic space – and when the Super Humans (in both worlds, Marvel and DC) hear about the plot, they all, Obviously make a plan to go there – and exterminate the threat.   When they all arrive together (the Marvel and DC heroes) on the abandoned ‘city-space-station’ (inside Dooms portal to both worlds),  to save the day… they’re all greeted by… each other!  a group of un-familiar faces from another world!  The DC heroes assume the un-familiar Marvel Heroes ARE the alleged team of Super Villains – put together to kill the world leaders and visa-versa.   An inevitable fight breaks out.  I’ve got…

We see our heroes seemingly kill each other off – in an epic war on the abandoned ‘city-space-station’  –  and with the heroes (from both worlds) extinguished – Doom, Joker and Skull make their move (in their respective universes) to kill the world leaders.  For example:- when Skull, or whomever bursts into the president’s office to finish the job without any heroes left to save the day…  he walks up behind the president, whom has his back to us in an elaborate desk chair – and reaches across to spin it around, the seat swivels but, it’s not the president whom occupies it… instead it’s Cap!… he’s not dead! –  he proceeds to disable Skull.  Similar scenes could echo for all heroes/villains with our heroes in both worlds capturing the appointed villains – and the story ends on a flashback to the hero fight on the ‘City-Space-Station’   and the moment we didn’t see before,… when the more intelligent heroes (from both worlds) realise what’s happening… and manage to stop fighting long enough to come to ‘some arrangement’ between them.

This final scene (which ties in the rest of the con/story) would be a beautiful bunch of moody dialog where all the ego’s from both worlds realise that they’re being played – and they make a plan of their own to fake their deaths – and use this cover as a way to defend BOTH versions of ‘Earth’.

Obviously needs fleshing out… just think it could be unprecedented.