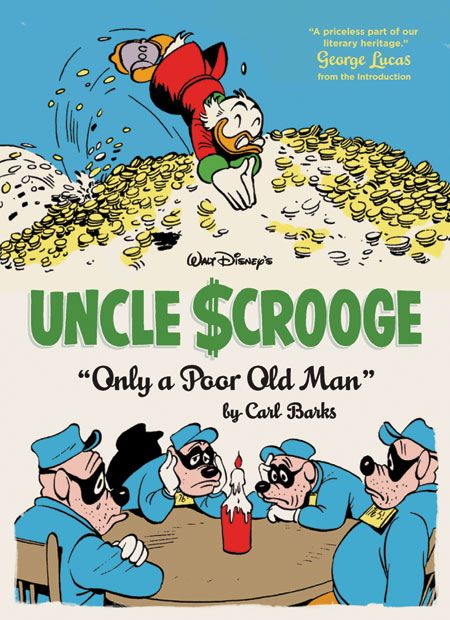 There are certain comic books that you are supposed to have read. Ones that have critical and/or commercial success behind them. Books like Maus and Watchmen and Love & Rockets and The Dark Knight Returns. Things that you know you are supposed to read because it made some top ten list or was mentioned in the Comics Journal or whatever. Carl Barks’s work on Uncle Scrooge fits into that category. Barks is held up as a master of the craft, an exemplary storyteller that created beloved characters for Disney and was given free rein to craft the stories of Duckburg as he saw fit. I am always somewhat skeptical when I hear about something being “so good” or “the best comic ever” from people. But Uncle Scrooge: Only A Poor Man lives up to its hype: it simply is that good.

First, kudos need to go out to Fantagraphics for the amazing job of reproducing and packaging the works in a fantastic hardcover edition. The colouring and reproduction nicely preserves the original look and feel of the comics (there isn’t glossy paper for example) and the edition is packed with short essays, commentaries, and critical appreciation of the work. I would like to see more companies take Fantagraphics’ approach to the reproduction and presentation of material.

Beyond the packaging and presentation though, the stories themselves are excellent. I was amazed at how Barks is able to race a story along, to continually take Uncle Scrooge down a new path during a quest, with such ease. Those familiar with the Ducktales cartoon will know the characters well, but their characterization and motivation will seem slightly different. Scrooge is a miser in the comic books, but a well-meaning one and he has epitomized the American ideal of working hard from nothing to amass a large personal fortune. The biggest difference is with Donald Duck. In the cartoons he is shown to be a incompetent misanthrope with severe anger management issues. Barks uses Donald as a foil to his Uncle Scrooge. Donald is competent  kind, and constantly aiding his Uncle in an effort to get him out, or keep him out, of trouble. In fact, Donald’s profession as a sailor is often extremely useful with the duck having extensive knowledge of vessels, maps, and small arms. That is not to say that Donald never gets angry or isn’t the author of his own misfortune, but Barks’s Donald Duck has a layered complexity that isn’t seem in the Disney shorts. 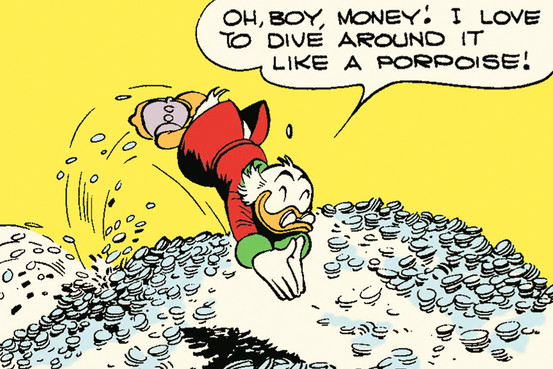 Barks didn’t only develop a deeper characterization of the ducks, but often dealt with much larger issues within his stories. Only a Poor Man is the first story that featured Uncle Scrooge as a main character and its treatment of the natures of riches and the acquirement of wealth are as relevant today as they were in post WWII America.  The stories within this collected edition deal with larger themes such as capitalism, colonial influence, greed, and the complex relationship between morality and legality.

While my description of themes may seem heavy, they are masterfully told in a fun way. These are true “all-ages” stories that can be enjoyed by adults and with your children at story time. If you have been passing Uncle Scrooge by on the shelf because you only read capes or you feel that it is just for kids you are doing yourself a great disservice.