You need to make your decision based on the second issue, because it will give you a better idea what the series will be like, issue-in, issue-out.

Today’s Dinner For Two: ‘A Double Dish of Death’

If you saw our special for tonight, maybe you thought we were serving you an old Bantam Doc Savage novel, or an episode of ‘Police Squad’, but no, that’s just our clever way of offering up two brand new #2’s. There is more than just numerical synchronicity going on here; You’ve got the Death nomenclature thing, both have been rebooted to capitalize on television fame (Deathstroke: On ‘Arrow’/Deathlok: On ‘Agents of S.H.I.E.L.D.’), both are killing machines, and both issues…have issues. 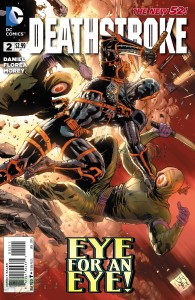 In ‘Deathstroke #2’, Slade Wilson has been taken in by I-Ching, an ancient dude in his late sixties who bears a passing resemblance to Chiun from the ‘Destroyer’ novels, but is in actuality, the ancient dude from the Late Sixties who screwed up Wonder Woman –wait, I’m sorry– ‘Diana Prince: Agent of P.A.N.T.S.U.I.T.S.’

When I-Ching gave WW a make-over it was all take-take-take. He took away her powers, took away her costume, and took away her magic lasso. This time, apparently, I-Ching is all give-give-give. He gives Slade his youth, gives him his missing eye, and gives him the power to materialize weapons out of thin air. (More on that later)

The plot? I’m not sure there is one. Characters are introduced and vanish almost immediately (after being shot through the head), never to be heard from again. There are no pay-offs in the story. Set-ups abound but…nothing…happens. At one point Slade force feeds some poor henchman a truth serum and the stupid slob starts babbling like an auctioneer on speed. But he tells him nothing, other than the fact that the Big Bad is after him. So Slade shoots him in the head, with a gun that magically appears in his hand.

One has to assume its a new power because it happens constantly in this story. One panel he is empty-handed, the next he’s giving this guy a .22 lobotomy..with a hunting rifle! Earlier, the same thing happens. It’s like David Blaine stuff: Nothing in my hands –POOF!– big-ass sword.

He is literally wearing only a diaper when he hears the army of henchmen attacking. He turns and attacks, and suddenly is wearing his complete body armor and mask with a full complement of Deathstrokey weapons. One panel before, he was in a pair of Depends, the next he looks like he just came from the Black Friday sale at Cabela’s. 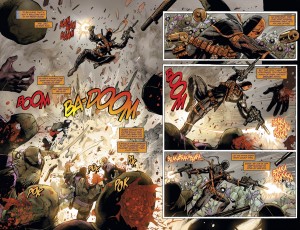 Tony S. Daniel is a terrific artist, and you don’t even have to check his resume to see that. Just open this book. It looks great. But he’s also listed as one of the writers. Ahhh, there’s the rub.

Think about it for a minute: You’re a talented artist who draws awesome splash pages and two-page spreads, so if you are also writing the book, the story is secondary to giving you a chance to come up with those ‘Gosh-Wow!’ visuals that a segment of the fanbase goes nuts for.

But a few of us like to actually read a story among the headshots. It’s a lot like theatre. Playwrights, actors, directors, stage technicians all work hard to lure the audience into a reality so they can let themselves feel like they are part of it. It only takes one little thing (a bit player waving at his girlfriend in the audience; a revolver pulled out when you’re doing ‘Julius Ceasar’) which reminds the audience they are watching a play and you have to work that much harder to get them back.

They’ve got a great idea here, a chance to start all over again. And it really looks great. And the problems it has I don’t lay at the feet of Tony S. Daniel. I blame the editors.

Editors: do your jobs, man. Get this guy a writer. You do that, and I might add it to my pull list

Our next Dose of Death on the menu is ‘Deathlok #2’. 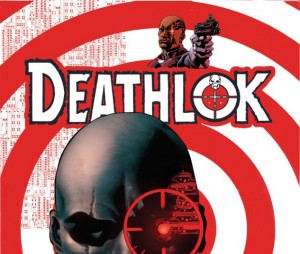 Like Deathstroke, Deathlok also gets a make-over. There have been a lot of Deathloks. Luther Manning, Michael Collins, John Kelly, Jack Truman. Apparently its very easy to get franchise. Two things all these DL’s had in common: 1. They were dead.  2. They were ugly.

Now we get Henry Hayes who is not dead and is in no way ugly. He’s not dead because this version of Deathlok –when he’s not assassinating world figures, blowing up embassies, and over-turning regimes– has a secret identity as a hard-working single dad trying to raise his precocious teenage daughter. If Hank was trying to do that while being dead, there would be countless references to the movie ‘Ghost Dad’ and we all know it’s not a good idea to go there.

The reason he’s not ugly is pretty obvious. No movie actor wants to play somebody ugly. (Insert any previous rant where I bitch about comics just setting up movies) 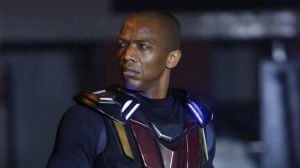 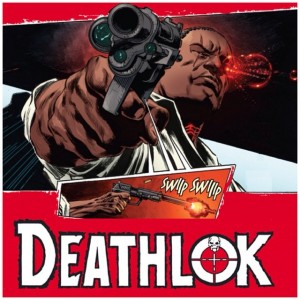 Deathlok is a more intimate book. More realistic, more gritty. It would have been right at home with books like ‘Sgt. Fury and the Howling Commandos’ or ‘G.I. Combat’. Deathlok is the soldier of the future. So the action scenes resonate more with the reader. Nathan Edmondson has a good feel for this material. The story moves at a great pace and his dialogue is good.

Mike Perkins’ art is good as well, but feels a little rushed to me. His action sequences don’t flow as nicely as I have seen before. My biggest problem though: Faces. Either Perkins doesn’t like to draw faces or Edmondson is over-doing the ol’ mystery thing. More faces are blacked out, obscured by the sun, or just plain covered up, than faces that are clearly seen. Part of it is story-driven (we aren’t supposed to know the identity of the mystery man pulling the strings, even though we probably do). But it’s a gimmick that is WAY over-done on this book.

I give ‘Deathlok #2 Three Pecan Pies

I give ‘Deathstroke #2’ three slices