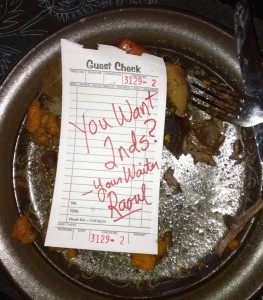 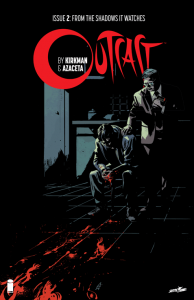 There’s a lot of interest in this item. After all, it’s ROBERT KIRKMAN, right? The WALKING DEAD Dude. The Horatio Alger for today’s creative generation. The man who came up with a comic that few believed in, and shepherded it into a TV Phenomenon! A BONA FIDE TV PHENOMENON! All the while sticking to his guns, and believing in his creation. 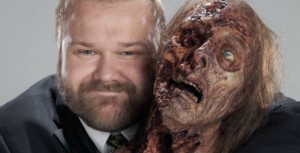 And I just happen to be the one hombre who doesn’t like WALKING DEAD.

Well, let me clarify. I am the one hombre who ADMITS he doesn’t like WALKING DEAD. You know exactly what I’m talking about: Some shows you aren’t ALLOWED to dislike without running the risk of being shunned like a Mennonite with a Smartwatch. For cryin’ out loud, if Seth Green and Chris Hardwick love it, there must be something wrong with MY noggin for not liking it. So admitting it, just goes to show what a remarkably honest bastard I am. <>

I think WDTV plods along (Yes, Professor Obvious, like a zombie). The lo-o-o-o-o-ong stretches filled with gripping angst, unspoken fears and knowing looks between characters loses my interest lo-o-o-o-o-ong before the next zombie pops out from a broom closet. My issue is more with the editor than anyone else.

And pace is one of the reasons I think Image’s OUTCAST #2 is the best comic out so far this summer.

When I read a comic I set the pace. I am my own editor. And ROBERT KIRKMAN and PAUL AZACETA have crafted something remarkable with this book.

You have to read it.

You have to read it.

OUTCAST #2 apparently takes place in West Virginia. (Remember, I just read the second issue. Maybe he addresses it in #1). I assume that, because KIRKMAN is very familiar with West Virginia, as am I (I lived with a Baptist church secretary for a number of years in Huntington, WV).  And it LOOKS like, and reads like West Virginia.

This is not a throwaway observation. It’s a key to what makes this not just a great comic, but something special. KIRKMAN’s words have directed AZACETA to create a very real world. It NEEDS that reality to work. It’s about demons, and possession, and exorcism. IT has to have a real setting.

This is West Virginia. The real West Virginia. It isn’t populated will hillbillies named Zeke and Billy-Ray, laying in a mudpit in flagrante delicto with a couple of hogs. There aren’t jugs of corn likker scattered about. Cousins aren’t banging each other.

And yet, the love between a brother and a sister is one of the most compelling and moving plot elements of this story.

That’s one of the beauties of OUTCAST #2.

This fight scene features not one, but TWO dudes beating the living hell out of some doofus named Randy. Immediately followed by the second dude asking the first dude if he wants to have a drink. The reaction of Dude #1 in the panel immediately following that invitation, is one of the greatest pieces of sequential art and writing I have ever seen.

No kidding. It stopped me dead in my tracks because it was so real, so perfect, and so hilariously funny.

If for nothing else, I recommend you read OUTCAST #2. Then go out and buy OUTCAST #1. Read it. Re-read OUTCAST #2 and immediately add it to your pull list. I did.

OUTCAST is not just a tremendous new comic series…it is something very special. ROBERT KIRKMAN, the poster boy for creating a comic that is translated into another medium, has spun a tale with PAUL AZACETA, ELIZABETH BREITWEISER, RUS WOOTON, HELEN LEIGH, & SEAN MACKIEWICZ that doesn’t NEED to be translated into another medium. To quote KENNY LEE PUCKETT, it is ‘Dead Solid Perfect”.

I give this one FIVE LOBSTER TAILS.