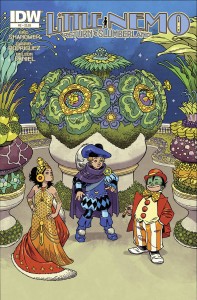 It’s a shame that the vast majority of people are going to see the title ‘Little Nemo’ and think it’s the adventures of the captain of the Nautilus when he was just a lad.

The truly intelligent minority –AKA The Readers of This Column– will know that Little Nemo was created by genius cartoonist Winsor McCay in the first quarter of the 20th Century. I don’t toss around the title “genius” very often: Leonardo Da Vinci, Aaron Copland, Nikola Tesla and the guy that invented the Heath Bar. Elite company, if you ask me.

In his beloved fantasy comic strip ‘Little Nemo in Slumberland’, McCay expanded the definition of comics. He experimented with panel shapes and sizes. He used perspective in an almost theatrical way, that added to the realism of his very Un-realistic setting. And there has never been anyone who conveyed movement as well as McCay. It was the closest you could get to animation on the printed page, not surprising once you see McCay’s actual animation in ‘Gertie the Dinosaur’.

This is one case where comic art really qualifies as ‘art’. To be exact: Art Nouveau. The stuff is gorgeous. Every panel is filled with intricate detail, and humor, and creativity.

The writing was a brilliant counterpoint to the eye candy on display. True, you could have a marionette clown riding a giant snail, but the marionette would say something like “If I’m late for work again, the boss will have my head!” (Or the snail would say it). There were no “thees” and “thous”. It was speech that the reader could identify with, that anchored them in a world that was almost too incredible to comprehend.

You would have to be crazy to try and capture the essence and attitude of Little Nemo.

These three, along with letterer Robbie Robbins, Editor Chris Ryall, and the Poobah of Publishing Ted Adams, have crafted a very special gift for us– IDW’s ‘Little Nemo: Return to Slumberland’.

Shanower is very familiar with the real estate, just like his familiarity with the lands of Oz and the Trojan War. His writing is not a pastiche of McCay’s. He has taken McCay’s concepts and innovations and written something brand new that could have actually come from the pen of Windsor McCay. Here’s an example. Look at this sequence from LN:RTS2– 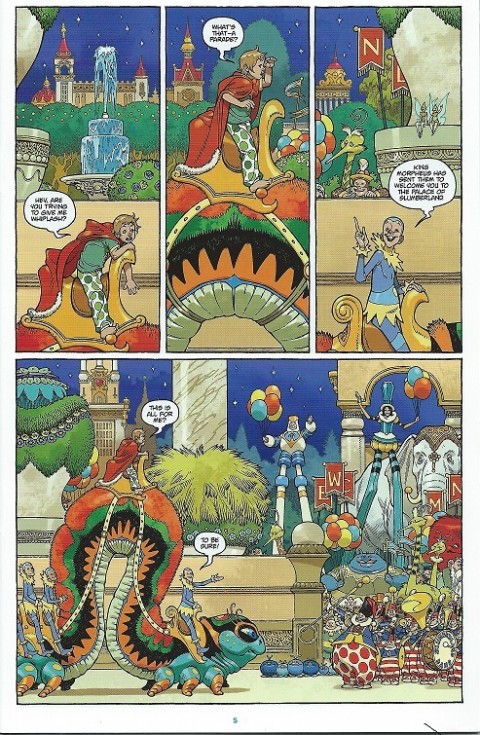 That giant inchworm actually moves across the page. The dialogue has humor and personality and Gabriel Rodriguez’s art itself will give you eye-gasms. There are 93 panels in this comic and every one of them could be a poster hanging on your wall, and a big part of that is thanks to Nelson Daniels colors and Robbie Robbins’ letters. (Letterer Love!! How does that float your boat…on in this case, bed.)

Admittedly, this book is not for everybody.

You will only enjoy ‘Little Nemo: Return to Slumberland’ if you are:

Everyone should read this comic. Add it to your pull list immediately.  I promise, you haven’t seen anything like it… at least not since 1926.

I give this one FOUR PERFECT CUPCAKES.