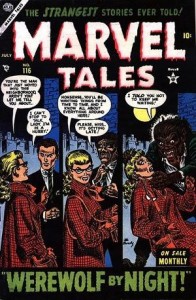 October wouldn’t be complete if we didn’t feature a scary Marvel super-hero in Arcs and Runs! Well yes it would, but it is Halloween and I just can’t resist taking a peak at the horror genre in Marvel comics this month. The early seventies was the heyday for this genre with books like Tomb of Dracula, The Monster of Frankenstein, Man Thing, Ghost Rider, Son of Satan, and our featured character Werewolf by Night all getting a chance at their own comic series.

Werewolf by Night was created by a combination of Roy Thomas, Gerry Conway, and Mike Ploog. As is the case with most $comic characters$ who created what and when is up for debate. The early writing was pretty much done by Gerry Conway and Mike Ploog does most of the initial artwork to launch the book. Roy Thomas is the editor. Stan Lee gets credit for naming the series. I would guess Stan had this idea rolling around in his head for sometime. Marvel Tales #116 from July 1953 featured a lead story called Werewolf by Night (also on the cover), and Stan was the editor of the book at that time.

Let’s take quick look at our character of the month…Werewolf by Night! 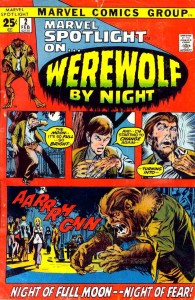 This is one of my favourite books of the early 70’s. It starts with Neal Adams cool 50’s style horror cover. I am also a fan of Mike Ploog’s atmospheric art style which suited the horror genre and this book well. A young Gerry Conway is the writer who goes on to become the famous “killer” writer of Gwen Stacey in Amazing Spider-Man.  This title he gets to hone his craft as the killing starts right away with a werewolf roaming the streets of LA at night. The werewolf finds a marginal person (they always do) a mugger and kills him.

The next day we are introduced to our main character of the book Jack Russell (someone hates terriers) who has just turned 18 years old. We also meet Jack’s mother Laura, his step-father Philip, his sister Lissa, and the always dastardly (why else would meet him?) chauffeur Max Grant. That evening there is a party for Jack’s 18th birthday. Jack feels strange at the party and takes off and runs to the ocean and once more turns into a werewolf. He somehow manages to find and kill a real wolf and then passes out. The next morning he is found on the beach by his father in law who tells him that his mother has been in a terrible car accident and near death. Jack races to the hospital. On her death-bed Laura tells Jack how she met and married his father. How his biological father had a family curse as a werewolf and that he would inherit the curse on his 18th birthday. How his father had died as a werewolf. Laura loves her new husband Philip and her last wishes is that Jack honour him as his real father and not raise his hand against him, which Jack swears to do just before she passes away. Unfortunately we find out that Philip had arranged Laura’s fatal car accident with Max Grant to obtain her financial fortune. Jack kills Grant as the werewolf but can’t bring himself to kill Philip as he must keep his promise to his mother not to raise a hand against him. The tortured werewolf stand weeping in the rain as this story comes to and end. 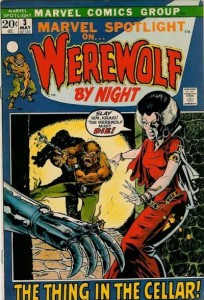 All art by Mike Ploog. Story by Gerry Conway.

We pick up our second Werewolf by Night story a full 3 months later with Jack’s sister Lissa being chased by a gang of bikers to a beach house. She gets inside but they smash through the window and enter to find – a werewolf! After a nasty fight they vamoose. The werewolf hides in the nearby woods. The police and father-in law Philip arrive along with a stranger and they have a conversation the werewolf doesn’t hear. Jack leaves the beach house the next day and is hitchhiking to nowhere when he is picked up by the stranger whose name is Nathan Timly and later at his house meets his wife Agatha. They question Jack about a book called Darkhold of which he has no knowledge. They don’t quite believe him and lock him in the cellar with a metal handed beast called Kraig. The three continue to question Jack the next day and it is becoming clear he has no idea what they are talking about. Kraig kills Nathan Timly in a fit of rage and attacks Jack who luckily has turned into the werewolf. Kraig and the werewolf battle and Jack gets lucky again. The weather has changed into a storm and a lightning bolt strikes and kills Kraig and his metal hand. Agatha has a heart attack and dies. The next morning Jack leaves intent on finding this mysterious book which he feels may have a cure for the curse. 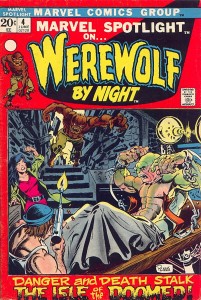 All art by Mike Ploog. Story by Gerry Conway.

Jack is back at his house and finds a stranger outside the building. There is reporter outside named Buck Cowan who is looking for information on an arcane book named Darkhold. What a coincidence so is Jack! It turns out that Jack’s father-in law has sold a castle belonging to his mother and formerly his father to millionaire Miles Blackgar. Blackgar has moved the castle to a nearby island brick by brick. Jack and Buck decide to join forces and get the island to look for the book. Jack finds his way there first and meets Miles Blackgar and his dark sun-glass clad daughter Marlene Blackgar. Miles tells Jack he is running a mental institution on the island and leaves to attend to patients. Jack questions Marlene about the Darkhold book but she avoids giving any answers and then she too is called away to help with a medical emergency.  Jack heads to the library and finds the Darkhold book. Too bad the sun is down and the moon is now up as Jack turns into the werewolf. He roams the castle and finds a sort of Island of Dr. Moreau scenario with misshapen humans who have been experimented on and locked away. A gunman appears and loses the battle with the werewolf who breaks open the caged mutates. They proceed to kill the guard. Miles and Marlene Blackgar arrive and the enraged werewolf throws him out the window to his apparent death. Marlene approach’s the werewolf in an almost friendly fashion before removing her glasses to reveal a gorgon type power to turn people to stone. She looks at Werewolf by Night and turns him into a stone statue as this episode to and end. 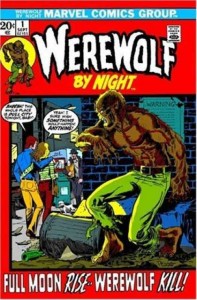 We wait nearly three more months for the next issue of Werewolf by Night to arrive and this time in his own series.

We left Werewolf by Night as a stone statue but thank goodness for the sun. As the sun crosses the statue the werewolf reverts to Jack Russell and the new series begins. First however there is some unfinished business with the Blackgars. Jack was found on a beach by his new buddy Buck Cowan and returned home. There he receives a frantic call from his sister Lissa who needs to see him right away. We can see she is being held captive by Marlene Blackgar, her still alive but invalid father Miles and a mutated goon named Strug. Jack still has the Darkhold book and they want it back. They lure him and Buck back to the island and quickly capture them. Jack breaks free just as the moon rises and he turns into a werewolf. As the werewolf prepares to attack Marlene Blackgar she removes her glasses once more but just before she can cast a glance the werewolf jumps out of the way and she catches sight of a mirror instead. She and her father are instantly turned to stone statues. Playfully Buck donates the statues to a local museum. That is the Coles notes version of this story which I confess I had to take from memory. The series is off to a good start and much of the early part of it spent on the curse itself and its history.

The Overstreet values for these books are listed below. My own personal experience with these books is you can find them for guide or less.

Werewolf by Night runs for 43 issues from Sept.1972 through to March 1977. Along the way the series introduces another important character to the Marvel universe – Moon Knight in issues #32-33. Jack Russell and his alter-ego are fixtures on the west coast seen and has had subsequent series and guest appearances throughout the Marvel Universe.

There are many Werewolf transition sequences on the internet today that you can view at your leisure. I wanted to leave you with perhaps the most famous one from the modern CGI era, the Oscar – winning special effects from Rick Baker and the classic horror film American Werewolf in London. I think I saw this a half a dozen times at the theatre.