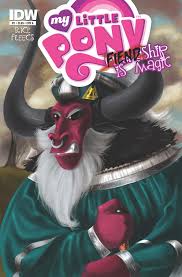 Have you tried the crow?

I admit, it is what you might call an ”acquired taste” and it requires a sauce with a sort of hardy nature, but I am living proof that it can be eaten. As a matter of fact, I would go as far as to say, everybody should periodically dine on it.

Which brings me to “My Little Pony: Fiendship Is Magic #2” from IDW.

I have a four-year old girl in my life named Louise, and I am crazy about her. She, in turn, is crazy about My Little Ponies. All of them: Fluttershy, Twilight Sparkle, Rainbow Dash, Applejack, Rarity, Pinkie Pie, Princess Luna, Princess Celestia, Princess Cadence and Larry. 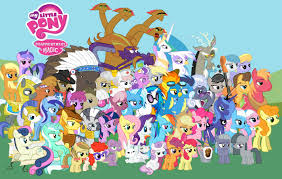 Alright, I’m not sure about “Larry” but there are hundreds and hundreds of Ponies. The Laws of Probability say, odds are, one of them is named “Lawrence” There are Earth Horses, Unicorns, Pegasus..es (Pegasi?), Alicorns… there are even Ponies that are hybrid Horse and Human Female called Equestria Girls…developed for Hasbro by Doctor Moreau, I am guessing. 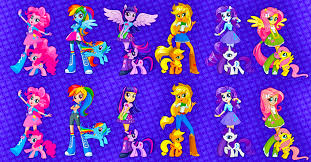 Some have magic powers, some can fly, some can transform into bigger more butt-kickier forms and they all live together in a municipality called Ponyville.

To the sarcastic, this is all pretty low-hanging fruit, and you know me, when it comes to picking produce, Raoul don’t use no ladder.

But Louise loves the very sod beneath the Ponies’ hooves. So I would choke back my wise-ass remarks and sit there watching my “Mr. Show with Bob and David” DVD’s while she plays with her molded plastic, four-legged pals. 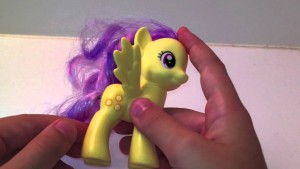 Then came the fateful day when she asked…commanded… me to play with her. So with Shining Armor in hand (the only “stallion” I could find in her herd) we began to play.

The first surprise was how structured her play was. She had specific personalities and character traits for each Pony. There was a storyline. Continuity. Friendship, duh, is an important part of the plot. But so is Forgiveness, Acceptance, Redemption.

She answered by directing me to her Netflix queue where she proceeded to show me TV episodes of “My Little Pony: Friendship Is Magic”.

The show is wonderfully animated. It has humor. And it deals with issues. (No joke. This season’s debut episode was about Marxism. Marxism. You never saw the Smurfs tackle Marxism)

So I bought “My Little Pony: Fiendship Is Magic #2” to read to Louise.

That’s not a typo. This is the second issue in a five-issue series highlighting the villains in the Pony-verse. This one tells the back-story of the centaur Tirek with a story that feels vaguely Shakespearean in tone. Writer Christina Rice had the task of doing a Pony story without one of the main weapons in the MLPFIM arsenal: Jokes. Tirek’s bio-tail (Crap! I swore no horse puns) bio-tale reads more like a melodrama…a compliment, btw. Good melodrama is tough to do. Tony Fleecs’ art is very effective, using contemporary layouts and panel placement, rather than falling back on standard comic book adaptations of cartoons, which usually consists of printed versions of animation cels. Heather Breckel’s colors make the Ponies jump off the page like they’re in a steeplechase. 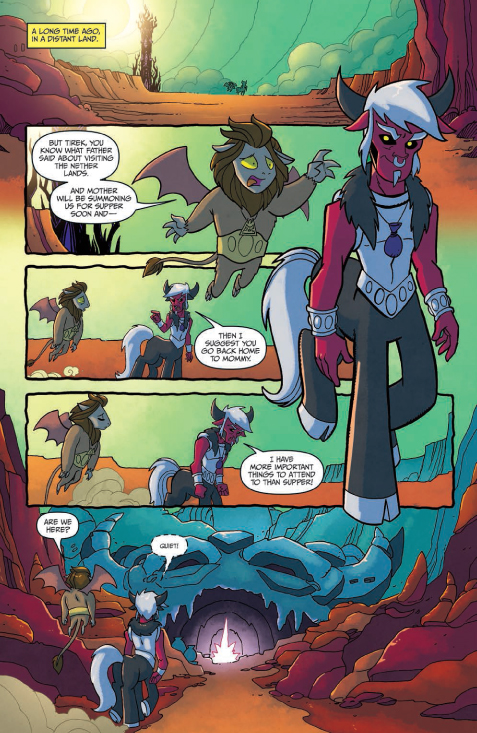 Okay, cool. Fine. Nice. But none of it was making me want to run right out and become a Brony. (You are going to have to Google that one yourselves, amigos and amigas)

So I was reading the comic to Lou…

Page Six. Panel One. I read the word balloon “If I were able to extract and harness the magic of an Equestrian–”

And the little voice of the wee blonde sitting next to me rang out: “Unicorn”, which was indeed the next word in the balloon.

She’s four! In her pre-school they are barely past the shoe-tying, chocolate milk and graham cracker phase of their curriculum! She knows how to nap! She doesn’t know how to read!

Apparently, she has watched enough Pony videos, perused enough Pony packaging, and absorbed enough Hasbro-licensed coloring books and sticker sets that she recognizes a whole bunch of words she has seen. Like “unicorn”, “pegasus”, “friend”, “rainbow”, and a buttload more!

After a love for her family, for nachos, and for Dean Martin, my dearest  hope for Lou was that she develop a love of reading. And she has, courtesy of My Little Pony.

Ain’t that a kick in the head? 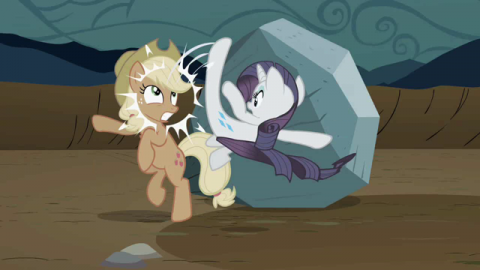 It is without an iota of sarcasm, irony, or snark when I say “Thank You” to  Hasbro, Bobby Curnow, Neil Uyetake, Heather Breckel, Tony Fleecs, Christina Rice, Ted Adams, Greg Goldstein, Tara Strong and most importantly Linda Faust (the Earthmother of My Little Pony: Friendship Is Magic) and Bonnie Zacherle (The creator of the Ponies back in 1983).

You and a whole bunch of other folks have helped open a multiverse of unlimited enjoyment to my Lou.

I would eat an entire murder of crows for you.