Fan Expo Vancouver took place on the first weekend of this month (April 3-5) and it was another big event. This year’s Fan Expo appears to have attendance that was bigger than previous years.

One of this year’s highlights included the Warner Brothers (W.B.) Games display. W.B. made a big splash this year with announcements of new video games such as Mortal Kombat X, the Witcher 3: Wild Hunt, and Batman Arkham Knight (to be released on June 23, 2015). The W.B. Games display also had some cool Batman costume displays, including an “ice cream waffle cone design” Bat costume! I call this a “variant” design of the regular Batman costume. Warner Brothers’ focus on gaming this year is more evidence that video games are still a big fixture on the Convention circuit.

The other big draws this year included the Lego booth complete with Lego Hulk and Lego Star Wars sculptures, and artists alley where I chatted with Mike Zeck. As usual, there was also a ton of cool merchandise and fans in interesting costumes.

On the comics’ side of things, hot sellers included Spider-Man issues, Avengers-related comics, and Deadpool comics. This is no surprise as Deadpool is in big demand these days, and Fox Studios is currently filming the Deadpool movie in Vancouver.

This year, I was also intrigued by which comic book dealers would be selling at conventions in Alberta. As many of you know, the oil price crash is hitting Alberta hard, resulting in lay-offs and falling house prices. Some dealers told me that they were optimistic about their sales at Alberta shows including the upcoming Calgary Expo. Another dealer took a “wait and see” approach to Alberta’s comic book market in light of the current economic challenges. 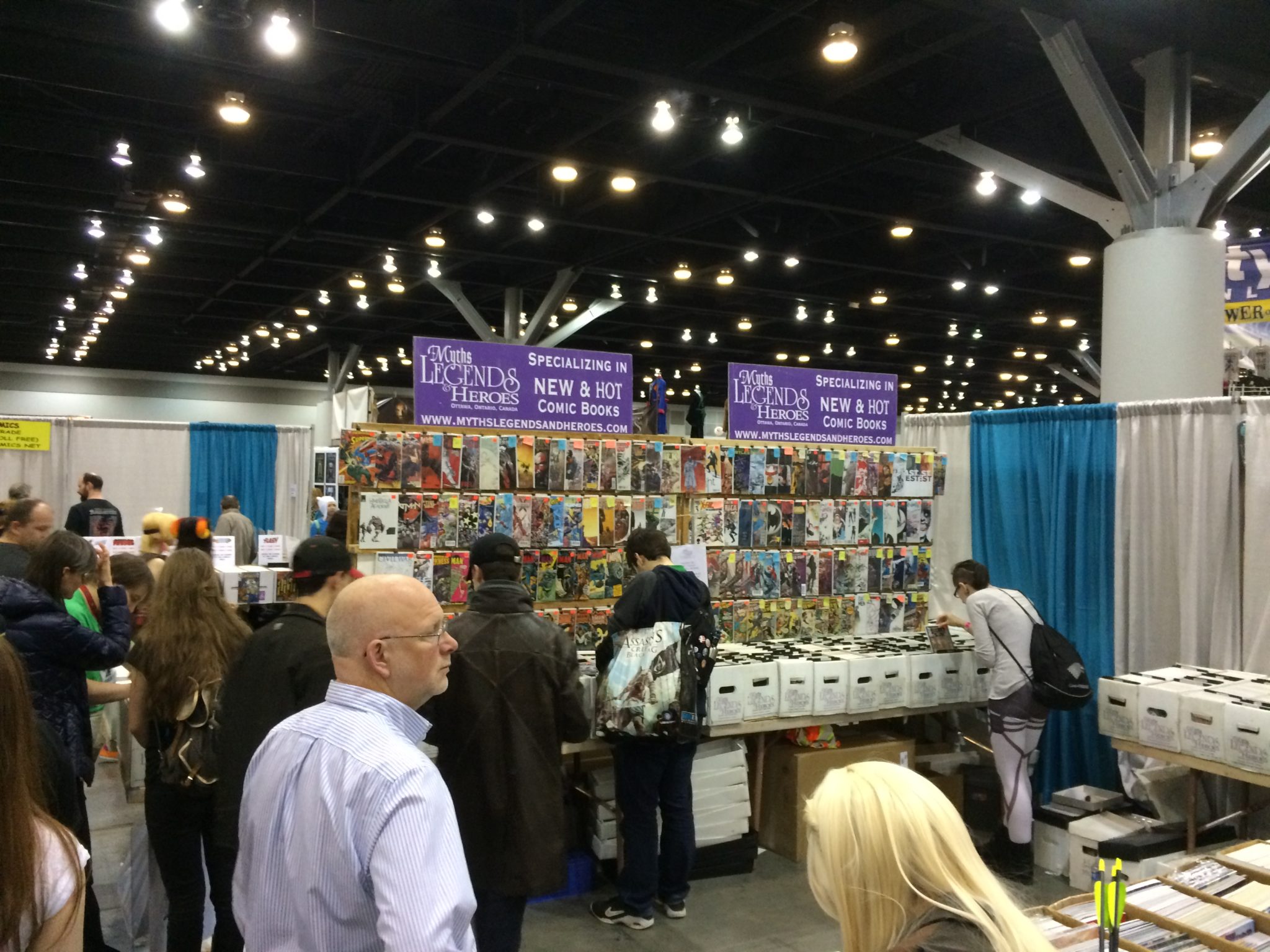 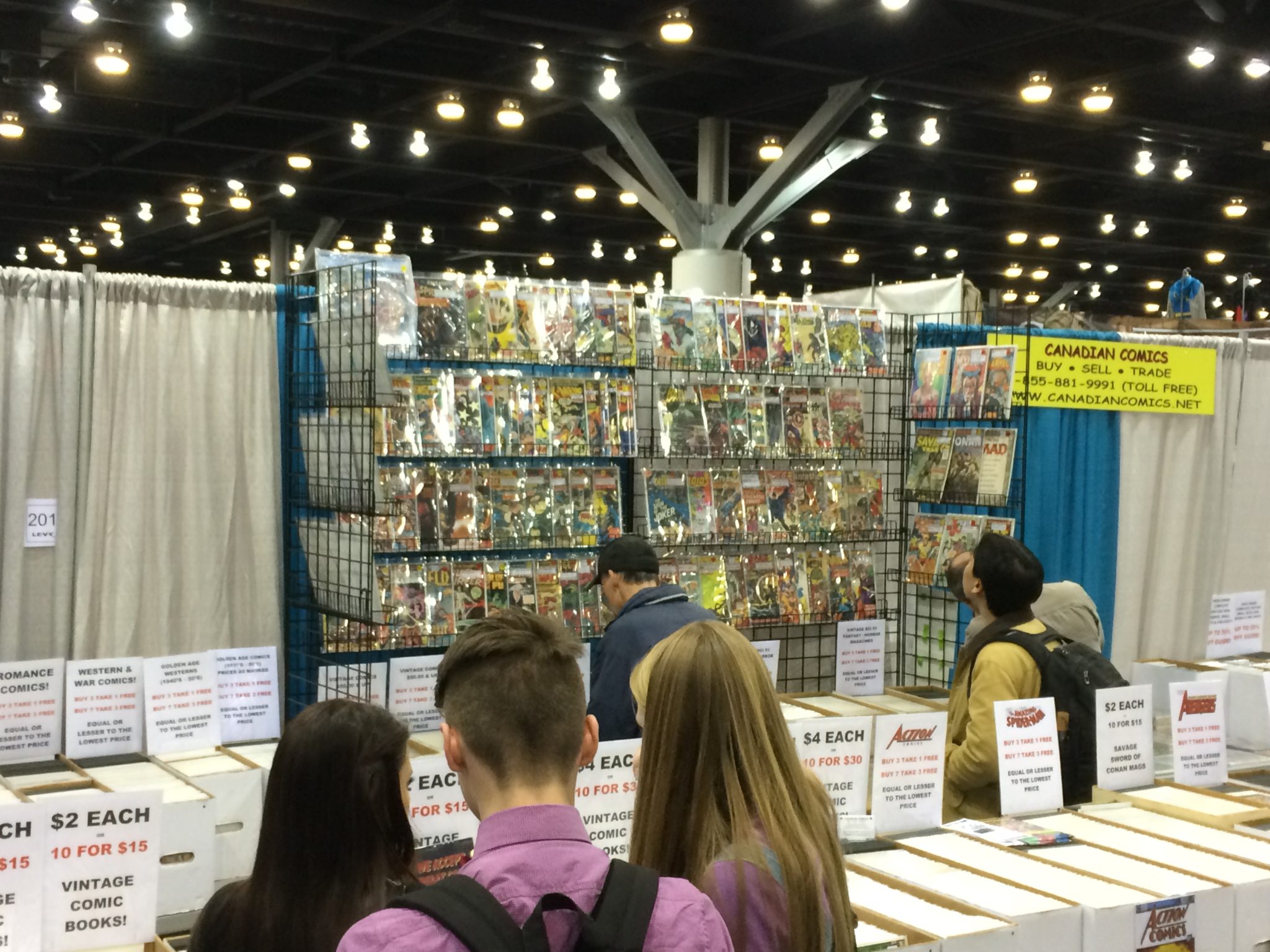 Fan Expo is the biggest Vancouver Comic Con, but it is still smaller than the ones in Seattle (Emerald City Comic Con), Calgary and Toronto. This year’s ticket prices hit interesting price points with the first day (Friday) being $20/ticket (plus service charge) while Saturday tickets costing about $35 (plus service charge) because it was the biggest day with the most celebrities and events.

While Fan Expo Vancouver is always a fun event, it is not without its criticisms. For starters, vendor tables jumped in price again this year with one dealer booth costing $685. This can result in fees of thousands of dollars for a dealer wanting to sell his comics in a couple of booths. I talked to one attendee who groused about how many more times can Fan Expo raise prices before it turns off fans and vendors? Other attendees complained about fewer comic book dealers than last year.

For a fan-boy like me, I will keep coming back to Fan Expo Vancouver, because it is the only big convention in town. Informa (the company behind Fan Expo conventions) has cornered the “Big Comic Con” market in many western Canadian cities and they know it. I know that it’s not cheap for a company like Informa to organize these shows, but I also want to take a break from the huge crowds on Saturday. Next year, I’m planning to attend only on the Friday of the show, where crowds are smaller and ticket prices are less expensive than the other days.