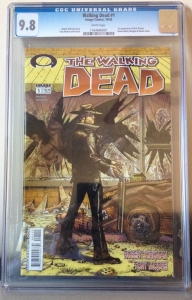 This has to be the sign of a healthy market for recent keys which has to mean lots and lots of new buyers are coming into the market.

Can we use Walking Dead #1 as a barometer  of sorts for the back issue market? It’s a pretty task specific book, not like say New Mutants #98 or Amazing Spider-Man #300, which both point to some superhero affinity.

I’d like to think Walking Dead #1 buyers will participate en masse but I’m not so sure.

As for this Walking Dead #1 sale? Surely it’s reached its limit.