O.K, let’s all sing together (sung to “Where have all the Flowers Gone?”):

O.K, I admit it, I collect those cheesy (but profound), WWII propaganda covers produced in the 1940’s. I don’t have a lot of Timely’s (only 7 actually), but I do own a number of the iconic covers loved and cherished today by many and I’m proud to own them.  They are good books, and the floor (the bottom price people will pay for a low grade copy), continues to go up (which frustrates me to no end).  But there is a disturbance in the force regarding the books from the EXACT same time period that do NOT contain either gore, extreme violence, bondage, a swastika or Nazi, a Japanese infantry man or one of either Hitler, Mussolini  or Hirohito. It seems with each passing day, some of these non-gruesome or war themed books (let’s call them common-themed), aren’t doing so well. So if you’ve been thinking about selling yours, maybe you should read this first! 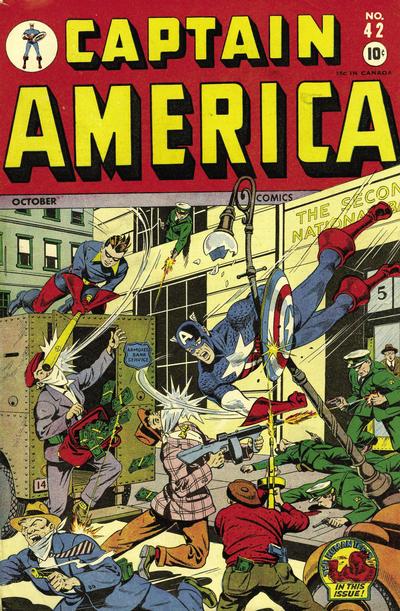 It cannot possibly be a worse time to be a seller of lower to mid-grade common themed Golden Age books (as an example of what I mean by common themed, Cap and Bucky beating up some generic thugs robbing a bank where no war is taking place or no one is having their throat slit), but to be a buyer, wow, today (and yesterday, and probably tomorrow), you are in luck!  I follow eBay and the big auction houses quite regularly.  Not very often do I let a week go by where I haven’t tracked prices and O.K, we all know the super high grades and the extraordinarily rare books are still doing well, those books are still heading upwards because that’s where all the money is going. But that’s the point folks, there are less buyers in general for quality stuff (perhaps since the advent of CGC), and now many of those buyers (not all mind you), are in the same boat—searching for the highest graded or rarest. Well where does that leave everything else? I’ll tell you where, on a leaky boat down the creek with no paddles!  What I mean by that is the prices are softening, and are getting softer by the day.  It’s all supply and demand folks—there are less buyers, at the same time more people struggling to pay their daily bills due to this weak economy so more books come up for sale.  The books just have to go for less, as those sellers who used to be buyers aren’t in on the bidding anymore. I can’t tell you about how many books I’ve seen in the past 3 months that you couldn’t touch for anything less than $500 (sort of my area of economic feasibility), now selling for $300ish—that’s 40% less folks, that’s a give-away price, yet that seller can’t do anything about it because although he might have spent $500 or more originally to acquire it, he would rather have the $300 to pay the rent then still own the book. And this goes on and on…

Now there may come a day when comic books are looked at as fine pieces of art (some would argue that day is already here). But this industry doesn’t have the heavy hitters (millionaires and billionaires), that say rare coins or original pieces of art have. Until that day I believe prices are only going to get softer, and I think I can predict this to continue into the foreseeable future. On the other hand, remember to look at this industry as a whole for the last 30 years—it’s a series of ups and downs, an incredibly cyclical hobby.  Do you remember in the very early 1980’s when all of the Marvel Keys actually went down in guide? Or when the comic implosion happened in 94/95 and you could buy many beautiful books for a song! The point is you could have found a copy of Marvel Mystery with Subby punching some poor unknown slob in the face for $60 at that time that if held onto until 07-09 would have made you 1000% on your investment (and I’m talking about lower grade, never mind had you found a true high grade gem). Things will come around again, run collectors who need that funny cover will still look for it and if you’re holding it, jackpot!  But stick to the good runs, i.e. Cap, Subby, Torch, TEC, MM, Action, etc. Remember (and this is INSANE to believe), early 40’s books will be 100 years old in just a little over 25 years.  Let me spell that out for you to really get a feel of what I’m talking about—ONE HUNDRED YEARS OLD! They would be officially considered antiques at that time folks: don’t you think there might be people still looking for them and collecting them?

It’s a down market today, take advantage. Remember, I had this knowledge 15 years ago when dealers couldn’t give Golden Age away, and I didn’t act. I’m not repeating those same mistakes today!