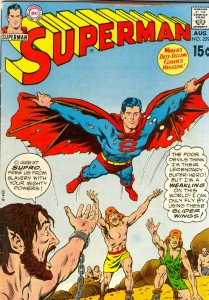 The Cover: Looks like Superman has somehow gotten himself stranded on some kind of unusual planet where his powers don’t work…for the 100th time. But what’s different this time is that he’s attempting flight with some half-assed glider wings as what appears to be a group of imprisoned slaves beg for help below him.

The Story: Our epic tale of wooden flight opens with Superman hurtling through the depths of space buck naked in a rocket! …that’s a sentence I never want to have to type again. But anyways as his naked butt  continues on toward his destination, he begins to recall the tale of how this came to be. One day he began to feel sicker and weaker until one day stopping a robbery by some thugs, his powers completely fail him and he is defeated and sold off to the Anti-Superman Gang for 5 million bucks. Like every good super-villain, instead of killing him, they decide to strip him naked and sell his clothes. I am also fairly sure they took pictures of Superman’s junk and doodled on his wang and butt cheeks to sell to the tabloids or put on the internet in the future..  After stripping him, they pile Superman naked into the rocket and blast him off to the planet Morgu, a strange execution planet where execution is an art and stuff I guess. I dunno, it’s just a really flimsy excuse to have show off how evil these people are with their imaginative ways of killing people.

Anyways, Superman lands on the planet and is immediately taken to the leader of the planet named Korpon who gives Superman the choice to be executed by Hyper-Vortexe liquidation, jewel sealing or turned into a planet with hyper-chlorophyll. Man they hyper everything up! As Superman chooses to be turned into a plant, he uses his quick wits to turn the gas back upon his executioners which probably throws his vow to not kill out the window and runs his butt into the wilderness.

As Superman emerges from a river he jumped into, he encounters a group of slave natives who immediately set him against their champion, a dude called “Supro” who is wearing a crude imitation of his Superman outfit! Gasp and wonder! Why is there a crazy old hobo guy dressed like a hobo Superman? Beats me! So Supro immediately begins pummeling Superman until Superman decides to bust out his judo chops and defeats Supro who immediately bows down to Superman and offers him the suit to make him the champion of the slaves.

They reveal that this strange custom was due to their people being rescued in the distant past by a man wearing a similar costume and named Supro. So from that point on, they named all of their champions Supro. Now that he is the champion, he must now undergo the test of flight aka, throwing him off a tower with some wooden glider sticks. Superman manages to glide to prove his worthiness and returns just in time to see a woman called Lirlon who is going to be sacrificed by Korpon to their Gods of Death by being incinerated in a giant skull! They have laser beam and rocket ships but still worship flaming skulls?? Superman is powerless to help Lirlon as she is dragged away but later that night, uses his gliding to make his way to the flaming skull to save her only to find that he is too late! Her shredded clothes lay before the skull! In a moment of insanity Superman begins to cry and laugh before a mysterious hand slaps the stupid out of him. It’s Lirlon! Who is revealed to be really Supergirl who landed on the planet and took Lirlon’s place after she found out that Superman was marooned on this planet by seeing criminals on Earth parade in Superman’s clothes. So wait…not only did they strip him after beating him, they begin wearing his clothes? I can just imagine some guy walking down the street with Superman’s underwear over his own. Then with some dues ex machina for justice, when Supergirl shows that the executioners can’t hurt her, they are all so ashamed of their inability that they march into the skull committing suicide and preventing them from needing to use more pages on this story. Supergirl then uses the last pages to reveal that Superman had some kryptonite dust on his suit which was draining his powers and the whole reason that these people have a Supro in their history was that Superman once saved them on a time travel adventure! With all their plot points neatly tied up, they fly into space towards home!

The rating: 6/10: Superman definitely does use the glider wings and is dressed as the hobo version of himself. But the slaves are not deluded, they realize that he was appointed by them due to his beating of their previous challenge nor do they ask him to free them with his mighty powers! But the images do happen so it’s close enough.