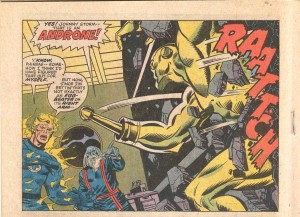 Wow, look at the egg-beater on that guy!

Though officially listed as Rich Buckler art, most of this comic was actually drawn by Canadian Vince Marchesano.

What I want to know is how exactly is this weapon used?