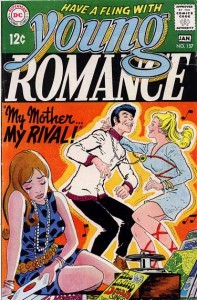 Comic book collecting is very cover driven. Comic books like Black Cat #50, Fantastic Four #112, Betty and Me #16 and Superman #14 are all sought after for their cover appeal. The cool part is that each of these covers is sought after for different reasons.

Another cool part about comic collecting is that there are many great covers still waiting to be ‘discovered’.

Young Romance #157 seems harmless at first but a close inspection of the cover reveals a dynamic seldom explored in Romance comics, namely a mother vs daughter rivalry for a man.

The late 1960s was a time of great change in American and Western society, movements like the Women’s Lib movement meant corny Romance comics’ (written by middle aged men for teen girls) days were numbered.

The Romance titles did try to tackle some social issues which is one of the main reasons that the collecting of Romance titles from this era remains strong.

Don’t be fooled, these comics are tough to find and finding them in high grade is almost unheard of these days.

I’m giving you an inside scoop here, grab these comics if they ever come available especially ones that offer covers of note like the one featured today.

The mother/daughter love triangle is just naughty enough and just taboo enough to merit special attention, heck it even garners interest from outside the comic collecting community. These are great collectibles!

Luckily for us I have found some statistical data up to back my claims. Last April a collection of high grade Romance comics from the Savannah Pedigree collection sold at auction for record prices.

There was a nice run of high grade Young Romance comics that sold.

Compare these issues which are priced in the Overstreet Price Guide in the same price bracket as our featured issue to the price realized for our #157.

Our issue was the lowest grade yet it realized the highest price. Covers like these do get peoples attention, they are in demand. 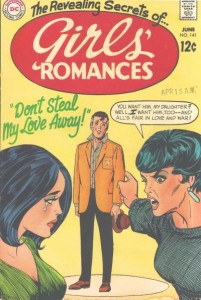 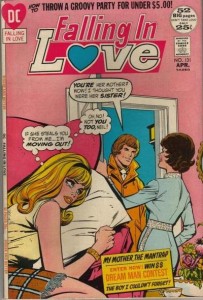 Again, these are the only 3 Romance comic covers that I know of that tackle the mother/daughter love triangle (I’m not counting the cover mentions on the 100 Page Giant reprints of the early 1970s). Does anyone know of others?