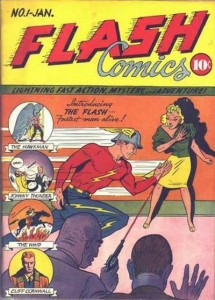 This week’s post brings another first to the Undervalued Spotlight. This is the first time I’ve featured the same character in back to back posts, granted there are 70 years separating the two books!

Flash is the last of the major early DC heroes yet to break out of the comic book niche and into the main stream pop culture. Superman and Batman did it decades ago as did Wonder Woman while Green Lantern did it just recently. The Spectre has never done it and I don’t expect him to in the near future anyway. Of the major early DC heroes its the Flash that has yet to be “discovered”.

So much of the DC Universe’s history centers on the Flash. It was Flash’s revival in Showcase #4 (October, 1956) that is seen as the birth of the Silver Age of comics. It was Flash’s death that was a pivotal moment in the DC Universe altering Crisis on Infinite Earths (April 1985 to March 1986) and it was the Flash title Flashpoint (May – September 2011) that ended the old DC Universe and ushered in DC’s New 52.

For all his significance in the history of DC Comics the character has never really made it out of the realm of comics in any significant and lasting way. This of course does not mean that the Flash character will not one day soon reap the rewards of wider pop culture acceptance. DC Comics has a lot invested in the Flash character and I’m sure they have plans in the works, aspiring to at least Green Lantern and Wonder Woman levels of exposure outside the insulated realm of comicdom.

Jay Garrick was the original 1940s Flash though Barry Allen and Wally West are the alter egos most fans associate with Flash. There is no changing the fact the Jay Garrick was 1st and in the 1940s he was huge. Garrick’s Flash appeared in Flash Comics, All-Flash Quarterly, Comic Cavalcade and was a founding member of the Justice Societry of America the superhero team whose adventures ran in All Star Comics. Not a bad resume.

Flash Comics #1 doesn’t stop delivering with the introduction of the Flash, the book also introduces the Hawkman, a DC stalwart for the past 70 years. The issue also introduces Shiera Sanders the soon to be 1st female superhero Hawkgirl and Johnny Thunder (he of the number sevens).

The first 15 page story titled “The Flash” was written by Gardner F. Fox with art by Harry Lampert. The initail story has the Flash facing the Faultless Four, a group of brilliant but deadly scientists after coveted “the atomic bombarder”. 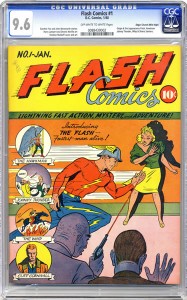 Flash Comics #1 is already a very valuable comic, it ranks 8th in value in this year’s 41st edition of the Overstreet Price Guide and the CGC 9.6 Mile High copy sold for $450,000 in 2010. Mile High pedigree aside the book has been underperforming on the market. Within the last 27 months a CGC 4.0 and a CGC 5.0 have both sold for under the Overstreet Guide value.

There are only 22 universally CGC graded copies (unrestored) of Flash Comics #1. Of the 7 comic books valued higher in the price guide only 1, the All American #16 is scarcer graded (17 CGC graded). Compare this to the 28 Detective Comics #27s, the 34 Action Comics #1s and the 69 Batman #1s and you get the sense of just how tough this book is to source.