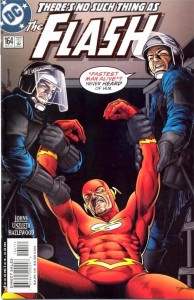 Did DC’s New 52 save the print comic book industry? Or did it just stave off the demise of the brick and mortar comic book stores by 3 or 4 years? Time will tell but I’ll put my two cents in and say that I’m glad it happened and I’m glad it’s turned out to be the success that it is.

One of the main architects of DC’s New 52, in other words one of the people we should thanks, is writer Geoff Johns.

Geoff Johns started at DC in July 1999 writing the 15 issue Stars and S.T.R.I.P.E. series. Then in January 2000 he began co-writing JSA with David Goyer, a couple of years later he would take over that series as head writer. But it was his next big assignment that for the first time gave Johns free reign over a major DC character as head writer. With Flash Vol. 2 #164 Geoff Johns started an epic 62 issue run that was the catalyst for future projects that would eventually lead to Johns essentially ruling over the whole DC Universe.

Near the end of this initial Flash run Johns took the reins of the then B list Green Lantern and turn it into DC’s best selling comic. This man was just warming up; he went on to stage such mega events as Blackest Night and Brightest Day.

Johns then penned the Flashpoint mini-series essentially setting up the demise of the old DC Universe and making way for the total reboot that is the New 52. When the New 52 was launched Geoff Johns got 2 books, the DC’s new flagship title Justice League, with artist Jim Lee and Aquaman, with artist Ivan Ries (his creative partner for Green Lantern).

It’s obvious that without Geoff John the New 52 most likely would not have happened. Johns must have taken his new title very seriously when he was named DC’s Creative Officer back in February of 2010, about 18 months before the New 52.

So what were the important events in DC’s recent history that we could somehow tie to this new success we’re enjoying today? Where can we trace the beginning of the end to? Can we go back to Johns’2009 The Flash: Rebirth #1 or do we go to Johns’ 2004 Green Lantern: Rebirth #1 or should we keep looking?

Personally I’m picking Flash Vol. 2 #164 as the initial spark for all that was to come. Geoff Johns loved Flash, in a 2000 interview he mentioned that this was the character whose issues he never missed for the 17 years he’d been reading comics.

The Flash character played such an important role in Flashpoint, the big event that led up to the New 52, that it’s hard not to see the importance of Johns’ initial 62 issue Flash. This was his favorite character, the character he was most familiar with and the character he chose to help usher in perhaps the biggest event in the history of comics.

Sales figures for this issue show a modest 34,076 sold back in 2000 (Johns would get the title up to over 50,000 copies sold by the end of his run) so these things are not necessarily around in great numbers.

The 41st edition of the Overstreet Price Guide shows $3 as the 9.2 grade price.