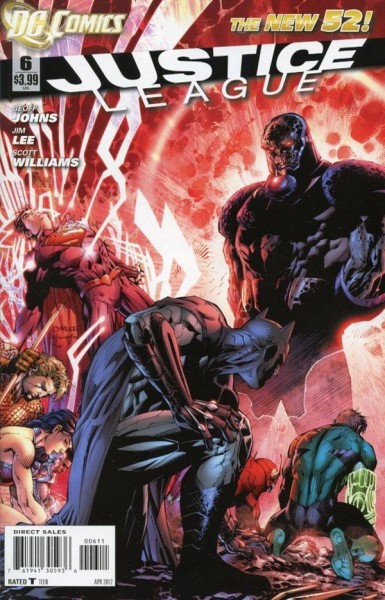 Justice League and its varying assortment of off-shoot titles has long been considered the flagship title of the DCU, often featuring the biggest heroes DC has to offer in its stories. Having been the lead-off title for the company’s New 52 initiative, that distinction held true and has remained a top selling book on Diamond’s sales charts since Sept. 2011. The first arc of the Geoff Johns penned series concluded last week with the world’s greatest heroes having a final showdown with the dark god himself, Darkseid.

Guided by a necessity to protect the world from the forces of darkness, Superman, Batman, Hal Jordan, Flash, Wonder Woman, Cyborg and Aquaman have joined forces to prevent the hostile subjugation of the human race under Darkseid’s rule. With Superman and Batman elsewhere, the rest of the misfit team pushes forward despite their handicap, hoping to save the day.

With chaos subsuming the city, a young writer named David tries his hardest to ensure his family’s safety amid Darkseid’s waves of destruction. Fearing there to be no tomorrow, he sees the future in the defiant actions of five heroes fighting their hearts out against an insurmountable foe. Elsewhere, Batman stealthily infiltrated Desaad’s torture room where he discovered Superman tied down and being impaled by various light constructs. With Superman subdued, the rest of the team continued their fight against Apokolips’ ruler; Wonder Woman gained the team an advantage upon deflecting the Omega Beams back into Darkseid’s eyes, blinding him as Aquaman attempted to render his other eye useless. Despite their efforts, Darkseid continued his assault. Cyborg deduced the purpose of the Mother Boxes and determined that if he can figure out the frequency he can send Darkseid back to Apokolips. He succeeded in opening a gateway, distracting Desaad long enough to allow Batman to hasten Superman’s escape. Superman flew through the portal and immediately attacked his enemy. With the aid of the team, they collectively beat Darkseid back into the portal and to his homeworld, seizing victory that day. Afterwards the team attended a ceremony in their honour.

Considering how slowly the arc began, I was content with how Johns wrapped the first installment in this new series. This story culminated nicely, having slowly introduced the main roster of this Justice League team over several issues, a choice I feel was smart as it avoided making the pages too cumbersome and additionally avoided the clumsiness of trying to introduce all the characters at once. It also created a measure of suspense, as it’s some time before we finally see the entire team together and working towards taking down the main antagonist. It created a desire and yearning for that moment when they finally click despite their misgivings about working together; the way this is executed and pulled off reminds me of how the team came together in the first episodes of the Justice League cartoon and how they gradually assembled in defence of a threat, ultimately beating back their foe while choosing to continue their work together once the threat is neutralized. Issue six itself had its own moments and polishing touches, adding layers to the story. At the beginning and end of the issue a young writer is featured in a narrative; throughout we’re treated to his thoughts of concern and anguish both regarding the world as well as his family. He believes this is the end. Yet hopefulness is infused into his words once he sees the League in action against their would-be oppressor. His role in the issue is later brought full circle upon creating a new book entitled Justice League, with the team members featured prominently on the cover. I also enjoyed the ending of the battle as Cyborg, the youngest member of the team, saved the day; he pushed himself far beyond his capabilities which I thought was a curious choice to use him in that way. The issue also features two short back-up stories featuring Pandora and her role in the DCU, as well as a short single page feature depicting what I can only assume are the first two members of the Legion of Doom. I feel like these short stories counteracted the goodwill and cheer emanating from the end of the first arc, painting the harsh reality and the threats have only begun to show themselves, working as a great end to the arc and an even better point to jump forward from.

While Johns’ story started out shaky, Lee’s pencils have been consistently wonderful throughout each issue, offering immensely creative, beautiful, well detailed artwork that can leave jaws dropped with the turn of any given page. The page two-three spread, depicting the team as they try to subdue Darkseid, is remarkable. The page featuring Superman’s torture is gruesomely horrific; Desaad’s clawed, boney hand is only overshadowed by the pained look on Superman’s face as his eyes roll into the back of his head. The best piece of art in the issue though was the image of Superman flying through the portal and striking Darkseid in the core of his body as red energy crackles around the dark god’s frame. Consistent with Lee’s tremendous pencil work has been the colouring of Sinclair, Avina and Hi-Fi. The colouring in this issue, especially in the opening two-page spread and the aforementioned page with Superman flying through the portal and into Darkseid, is astounding. The colours are bright, vibrant and make Lee’s drawings pop off the page even more, christening a visual tour-de-force whose quality is hard to deny.

I was admittedly frosty to the series in the beginning, having not been particularly pleased with the execution of the first two issues and the unclear direction the book was going in. I feel like Johns salvaged the story in the end, threading everything together for a solid conclusion to the first New 52 Justice League arc. I believe he nicely paced the introduction of the characters over the first few issues, culminating in a massive fight between the team and Darkseid in the final issue. I like how the arc played out, and I like how the issue was bookended with the writer’s narrative. More interesting was the Pandora back-up story which sets up her future involvement in the DCU, while clarifying her role in the continuity reset. This, along with the Legion of Doom allusion, nicely charts the immediate future’s arcs, which gives readers something to sink their teeth into after a big opening arc.