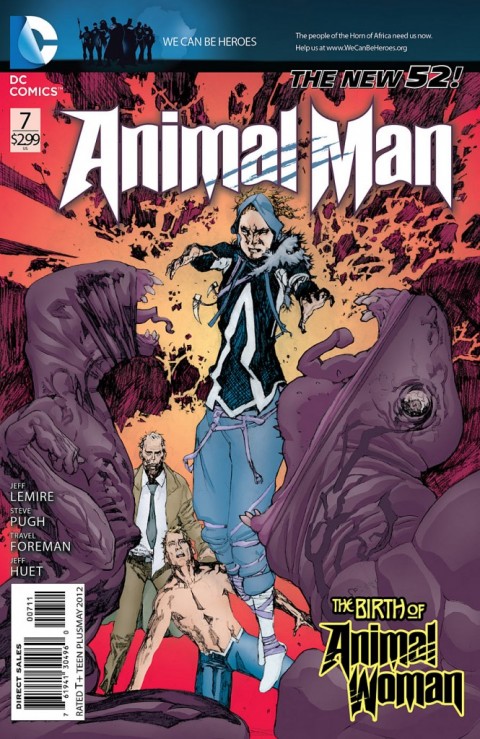 This series has been one of the more under-exposed new titles among the “New 52,” which despite resoundingly positive reviews hasn’t quite met the level of buzz the top 10 on Diamond sales charts have received. The title puts Buddy Baker in darker situations than he’s been before, dealing with the underbelly of his powers, while also juggling the strains of raising a family.

Animal Man follows the adventures of Buddy Baker and his family, a story which takes a turn when his young daughter begins to manifest her own powers. Unlike her father, Maxine begins to display necromantic control over dead animals. The development leads Buddy to go on a journey to discover the source of this power and its connection to “The Red,” the animal counterpart to “The Green,” the source of Swamp Thing’s powers. And much like “The Green,” there have been numerous creatures chosen as avatars of “The Red” throughout history, some becoming pure evil and becoming known as “The Rot.”

In the beginning of issue seven we find Buddy and his family on a road trip, travelling along Highway 191 through Arches National Park in Utah. Immediately we see the affect that Maxine’s presence has on the wildlife in the area, as a young man’s dog barks loudly at a small army of animals from the nearby forest in Hawksville, Utah, while another man driving down the road flees in terror as another herd of deceased animals rampages down the interstate. I liked how Lemire sandwiched the Bakers’ arrival into the state between the strange, supernatural occurrences of animal activity depicted over the first half-dozen pages. The temperament of Lemire’s pacing was steady in these pages, slowly building towards the obvious conclusion as the Bakers venture further into the heart of Utah; the impact of Maxine’s presence and the chaos that follows her are finely contrasted and balanced against the sweetness of her youthful character. With the animals running rampant, Buddy and Cliff abort their food gathering and race back to their family amid news reports purporting the animal rampages to be sourced from a new strain of rabies. Once they arrive, the tumultuous environment the Bakers find themselves in is put on display as it’s clear this familial unit is holding on precariously.

The recent strains on the unit boil over as the inherent jealously between siblings Cliff and Maxine, alluded to earlier in the issue when Cliff questions why Buddy doesn’t take him flying any more, takes centre stage. This argument is amplified by their Grandmother’s assertive tone in her belief that Ellen’s marrying of Buddy was a colossal mistake, considering from her perspective the detriment it’s been to both Ellen’s mental health and Maxine’s childhood. Lemire makes Maxine’s emergence the lightning rod in this squabble from multiple fronts. The heart of this conflict brings a very real tone to the comic, at least in so far as a familial dynamic is concerned and the impact of superheroism on their membership. While this aspect of superhero comics has been explored before, never has it been examined to the length Lemire does in Animal Man. This element humanizes the story exponentially, rooting it more in realism than in over-dramatized theatrics. The supernatural elements of the title intertwine nicely with this aspect, tying it nicely in to books running in the vein of Justice League Dark or Swamp Thing.

The artwork in this issue was also quite strong, despite a minor hiccup during the transition between Foreman and Pugh. Ellen Baker is missing her glasses in the final page of Foreman’s opening three-page contribution, while Pugh draws her as having them in their normal position on her face thereafter. We see Ellen without her glasses again in the final two pages, although that can be attributed to her having just woken up. This minor continuity mistake in the artwork is not uncommon in books with multiple artists, as complete synergy can’t be expected. To their credit, the artwork seamlessly moves between them, creating a near seamless environment where the pencils and inks sync up nicely. The dark, violent, feral nature of Foreman’s animals spring from the pages, both in their demeanour and the terror they infuse into the characters they make contact with, a feat accomplished later in the issue as their silhouettes close in on the Bakers’ RV.

Much of the issue is drawn by Pugh, who creates a very “Paolo Rivera-esque” environment for the characters, one which is nicely detailed, full of action and interaction, while the characters themselves are very expressive in their conversations with each other. Pugh surpasses that benchmark by further diversifying the pages away from simplistic page layouts later in the issue during the interior shots of the RV as Buddy awakens. The page is divided nicely with the RV sitting atop a hill amid some silhouetted trees, while the sides of the page continue the landscape leading down toward the exterior of the mobile home. In between is the aforementioned interior artwork; two panels are divided by a slimmed, close-up shot of Buddy sleeping, while in the two separate panels the family is shown asleep while in the other Buddy is awakened. From here the artwork takes a nightmarish tone, giving Buddy a gruesome vision of the future. I liked how the book ended as well, showing Buddy opening the side door to their RV to see the army of dead animals that have gathered, which mirrors the panel preceding his nightmare perfectly.

Animal Man is a marriage of great work between a great writer and very skilled artists. The art complements Lemire’s dark tale of a superhero’s family and the trials and rigours they face as a unit, while Kindzierski’s colouring work aided the transition between artists. I feel as though Lemire has crafted a seminal work for the character which has brought Animal Man to the fore of the DCU, ingraining it into the supernatural realm of DC’s mystical mainstays. At the centre of this tale though is the affects of superheroism on the family, a dynamic not completely explored to this degree. It’s a story Lemire has plotted coherently, to the point Animal Man  has become one of the more compelling reads in DC’s “New 52.”