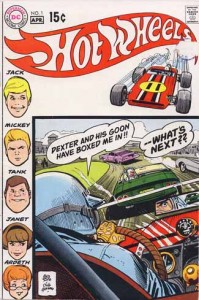 The Mattel Toy Company introduced Hot Wheels in 1968. Their first salvo of 1/64 scale die cast cars included 16 models including the Corvette, Mustang and my favorite the VW Beetle. The company had an instant hit, kids loved playing with and collecting these little die cast cars. A second wave of 26 cars was produced in 1969 and this set reaffirmed the success of the first wave. A Hot Wheels Saturday morning cartoon aired in 1969, things were moving quickly.

By 1970 Hot Wheels was established as one of the most popular toy lines in America, this 3rd model year saw 43 new die cast cars hit the market. Dc Comics saw an opportunity to capitalize on the popularity of the franchise and in April 1970 began publishing Hot Wheels comic books based on the Saturday morning cartoon that aired the year before.

Unfortunately the Hot Wheels title lasted only 6 issues. Today this run is actively collected, strong fun covers make the books visually appealing. The 6th and final issue features Neal Adams art and is collectible in its own right.

I’ve often spoke about properties having to survive that generational jump in order to reach long term success. Hot Wheels is old enough now to have kids boast that their grand fathers collected and played with the cars. Mattel’s own estimate is that some 41 million kids have played with Hot Wheels. The collecting community for Hot Wheels cars is well established and vibrant.

The property shows no sign of slowing down, in 2012 Hot Wheels will release some 250 cars and plans and rumors for the 2013 line are already creating a buzz.

There have been a few unsuccessful attempts at making a Hot Wheels movie. Legendary Pictures is the latest company to attempt a feature film of the property. They announced plans for their film about a year ago though I could not  find a firm date for the film’s release.

The current back issue comic book market seems to like Hot Wheels #1, of the 45 copies that have CGC Universal (un-restored) blue labels 18 are graded at or above 9.4. CGC 9.4 copies are realizing close to $200 but the books are relatively scarce and are traded infrequently.

Hot Wheels is a little like Scooby Doo, both were from the same time period, both are still super popular and both were adapted early into comic book form. Scoob of course has been much more active in the comic book medium.

Comic book interpretations of highly popular properties can be great investments. Because of the popularity of the property demand can be very high and sustained for these comics just look at Star Wars and Scooby Doo as examples.

I like Hot Wheels #1 because the strength of the property has not yet passed into the comic. I think the book has great potential as a collectible.