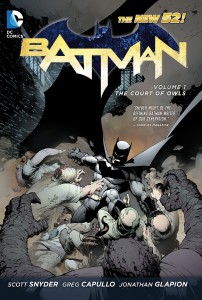 The DC Comics’ “New 52” relaunch sees former Detective Comics writer, Scott Snyder, taking over the reigns of Batman’s eponymous series. Snyder is joined by penciller Greg Capullo and inker Jonathan Glapion on art. Together, the team has crafted exactly the kind of Batman story that belongs in a relaunch like “The New 52;” one that features all of the story elements you might expect to find in any Batman story, told with excellent craft, both writing and artistic, and a thematic tone that emphasizes Batman’s status as a uniquely urban hero, tied dramatically to his city.

In The Court of Owls, Batman finds himself on a case that begins with the mysterious murder of a John Doe that leads him to war with a presumably fictional secret society over control of Gotham City. Snyder never really explains why the Court decides to go to war with Batman at this particular moment (at least not in this volume, which really only collects the first half of a year long story), but the mystery succeeds in drawing the reader in by placing two plot hooks in its first chapter: a promise by the killer to end Bruce Wayne’s life, and a piece of evidence suggesting the killer is actually Nightwing (also known as Dick Grayson, the original Robin, for the uninitiated). Neither of these hooks are particularly believable for anyone who has been reading superhero comics for a while – its incredibly unlikely that DC Comics is going to have the star of their most successful franchise die at the hands of his most beloved sidekick two months after a clean-slate relaunch – but they’re bold enough statements to make the reader interested in seeing where Snyder goes with them.

What follows is a series of everything a fan could want from a Batman comic. Batman beats up some thugs in dynamically drawn and exciting action sequences, but also does actual detective work in the form of in-depth autopsies and crime scene investigation. Perhaps more importantly, Batman faces off against a threat that is, as Commissioner Gordon points out within the story, as legendary and thematically theatrical as Batman himself. By this volume’s end, that threat – the Court of Owls – has pushed Batman to his every limit – physically, emotionally, and mentally – and is set to push even further.

It’s all done with storytelling excellence. This tale has bleakness and mystery to it, but is nowhere near as dark as Snyder’s previous entry into the Batman mythos, The Black Mirror. He uses Gotham city as a character throughout the tale, alternately aiding and betraying Batman as he battles the court for what Batman perceives as the city’s soul (though its unfortunate that the goal really doesn’t get any less ambiguous than that). Snyder peppers action sequences with captions of monologue relaying bits of backstory, history, or Gotham legend to emphasize this, and eventual nails it home with scene of combat that symbolically shows Batman and the Court looming over the city in miniature.

Capullo draws Bruce Wayne in a boxy, square-jawed manner that, when combined with Glapion’s heavy inks, feels reminiscent of Batman: the Animated Series with a bit more edge. Its a style that works well enough for investigative and conversational scenes, keeping them feelings energetic and lively, and works especially well for the action sequences. The team appropriately uses layouts with more and smaller panels for the more dialog heavy scenes, saving the larger panel layouts for the action. Unfortunately, there’s a couple of instances where the large amount of dialog causes a word balloon to take up the majority of one of those smaller panels, but its a minor distraction at worst, and on the whole everything flows together well. Snyder and Capullo also add some visual flare to the book with interesting panel setups, such as one shot that shows a conversation between Bruce Wayne and Alfred as seen through the eyes of Batman’s helmet-mask – mirrored later on through the eyes of a different mask – and another sequence that has Batman slowly loosing his mind in a way that may have the reader feeling like they are doing the same (and illicit some odd looks if reading in a public space).

The Court of Owls is an excellent Batman story. It may not be as ambitious as classics like Year One or Arkham Asylum, or hit the dark emotional and psychological depths of Snyder’s own The Black Mirror, but its the kind of story that is at the core of Batman’s character: a blend of pulp hero, detective, and urban legend. If you’re going to relaunch Batman for a new era, I can’t imagine a better way to do it than this.

Jamie Lovett is freelance writer and blogger with a passion for comics limited only by his budget. He's written for Examiner.com and IndiePulp.com and may or may not be a mutant.
Articles: 5