August 11/2012 was the Canadian G.I. Joe Convention in Toronto.  This year’s event had many special guests and panels.

One of the panels was G.I. Joe Declassified: The Secrets of G.I. Joe. 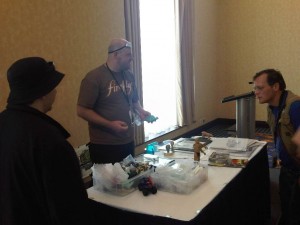 G.I. Joe debuted in 1964 as a 12″ action figure.  It was extremely popular but it’s popularity waned in the 1970’s and G.I. Joe became an adventure toy instead of a military toy.  Eventually the line was retired.

In the late 1970’s and early 1980’s action figures became very popular again. Star Wars was the reason for the popularity.  What made Star Wars toys different was the scale of the figure.  Instead of making a 12″ figure (like early G.I. Joe figures, or the 8″ later figures) the Star Wars figures were 3-3/4″.  Many movies and TV shows cashed in on the popularity of small scale action figures with their own figures.

The designers wanted the toy to be realistic, but at the same time the toy had to be futuristic. 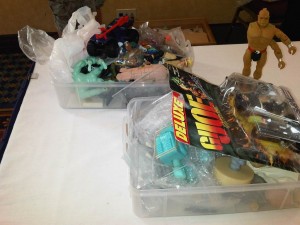 During the panel we were told that the plans for the original release of G.I. Joe was very different from what actually came out.  When G.I. Joe came out in 1982, only 15 figures were released (13 G.I. Joe, 2 Cobra).  Cobra Commander, the 16th figure, was an exclusive mail-away figure.  Joe Declassified found out that there were 2 other figures that were originally supposed to be released with the original 13 Joe figures.  These figures were not made until several years later.  Declassified said that if those 2 figures were released in 1982, the G.I. Joe line would have been completely different from what we know now.

1987 was a very different year for G.I. Joe as well.  The toy went in two different directions at that time.  One direction was the traditional military route.  The other was very extreme.  The traditional military figures at that time were Gung Ho, Lt. Falcon and Tunnel Rat.  In 1987 Gung Ho was re-issued wearing a Marine dress uniform.  Many executives at Hasbro didn’t agree with the release of that figure.  It was originally designed to be another character, but after being rejected the character was redesigned to be Gung Ho, the G.I. Joe team’s original Marine.  Lt. Falcon and Tunnel Rat looked like they were regular military as well.  Traditional colours and accessories were used with those characters.  They were very popular at the time, and look normal compared to some of the extreme elements of G.I. Joe. 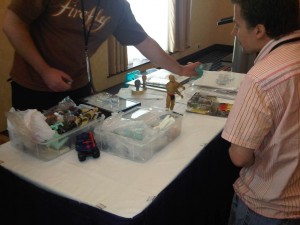 One of the troubles that Joe Declassified runs into is trying to find out the complete story behind the design of the toys.  The toy industry is very secretive and sometimes departments within a company don’t know what is happening on either side.  One production team would be working on something, but they wouldn’t know what the other department is working on.

In the early to mid 90’s other toys were becoming popular and started to take G.I. Joe market share.  To try to compete with these other toy lines G.I. Joe introduced some new ideas.  Those ideas were Ninja Force, Star Brigade, Eco Warriors and D.E.F. (Drug Elimination Force).  One of the ideas that never made it to production was “Replicators”.  The idea behind Replicators was an alien force was going to attack Earth.  Some of our favourite Joes and Cobras would be cloned by this alien force and replaced.  These figures would feature swappable heads and new features.  The figures did make it to the pre-production stage.  Cast pieces were made of the figure, but production didn’t proceed from there.  The idea of Replicators seem extreme for G.I. Joe, but at that time they were competing against Teenage Mutant Ninja Turtles, Power Rangers and the re-release of Star Wars.

Joe Declassified said that some of the challenges that the G.I. Joe designers had was to create a military toy line and pitch the idea to people who didn’t like war toys.  Some of these ideas were changed slightly and repitched later.  Sometimes those ideas were approved.

This panel was very informative and gave some great insight into the production of the G.I. Joe toys.  They didn’t have enough time to highlight the complete history of the 3-3/4″ toy line, which spans 30 years.  For more information visit their website for more stories and pictures about the history of G.I. Joe.