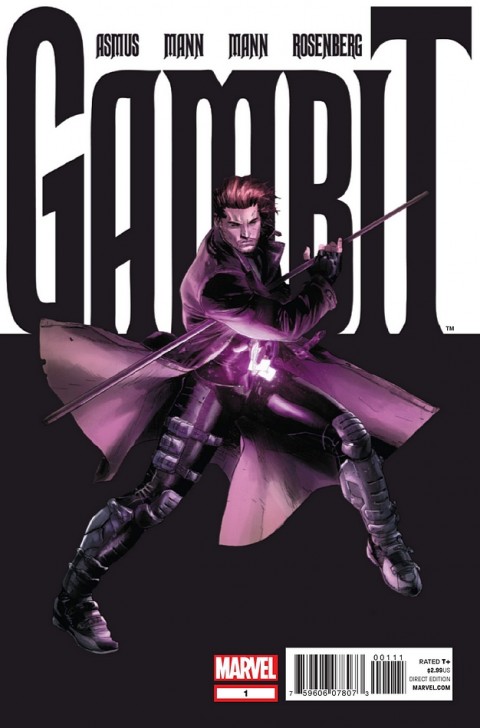 Gambit titles have always been an oddity. Popular enough that Marvel has included him in a number of ensemble X-Men titles, but never popular enough to hold his own title; past solo outings for the “Ragin’ Cajun” have been mixed bags. With two solo series running 25 and 12 issues respectively, the latter of which was last published from 2004-2005, the limitations of his solo adventures have lacked a broad range of appeal to casual readers.

Ahead of Marvel’s “Now!” relaunch, the company has again ventured into publishing a Gambit centric series, this time with writer James Asmus and artists Clay and Seth Mann as the creative team behind the title. The series begins with a narrative from Lebeau himself as he showers, disclosing his feelings about his costume, his social circles and his current profession as a “teacher” and “security guard” at Wolverine’s school. Asmus quickly diverts us and highlights, similarly to past solo titles, that despite his associations Gambit is still a thief and thrill-seeker at heart. The character’s latest solo adventure begins as he crashes a party organized by a new character named Borya Cich. While Gambit is notably known for his affinity for the opposite sex, his strategic cunning as a master thief is of equal note and is the true focal point of this issue. The art of deception is a central plank in Gambit’s world, a philosophy he puts to use as he uses a kinetically charged toothpick — gained from an hors d’oeuvres plate — to cause a distraction to allow him to enter Cich’s house undetected. From here the book follows the template set by previous Gambit titles, demonstrating Lebeau’s keen ability to enter places with security systems designed to keep people like him out.  The title has an air of James Bond added to it, with Gambit using his phone combined with special glasses and gloves to gain verbal, retinal and fingerprint recognition to the vault.  Despite the character’s successes, Gambit takes a turn as the job becomes a nightmare of explosions and commotion, leaving Gambit to hastily escape the scene and back to the party without being overtly noticed. While the issue appears to end on low-key note, the final page paints a different picture for Gambit fans leading into future issues.

Teaming with Asmus is Clay Mann on pencils, Seth Mann on inks and Rachelle Rosenberg on colours. You may recall Clay Mann’s work on various issues of X-Men Legacy or Magneto: Not a Hero; his work on Gambit is of the same quality as those offerings. The artwork is filled with nuanced details that can only truly be displayed as a storytelling device in comics. Decked out in a fine suit and more James Bond styled gadgets than can be counted, we find the X-Men’s resident thief more than prepared to crash Borya Cich’s party. With glasses capable of registering the identities of those in his line of sight or their retinal scans for that matter, to gloves that record the fingerprints of any hand it touches, Mann and Asmus have taken Gambit visually where he has yet to go, casting him as more of an anti-James Bond than an outright thief for hire. The art creates an aura of cultured deception, that he’s a high-class thief above the lowly castings of commonality associated with petty thieving.

One of the nicer sequences of art appears later in the issue; it’s not so much that the art is breathtaking, rather the series of panels which displays Gambit sweet-talking a female server and taking a mini-hotdog, placing the hot dog in his mouth and while holding it with his teeth, slides the toothpick out between his fingers as he waves at a security guard. A smile creeping across his face in a tight panel, the toothpick begins to glow a bright purple, and while the guard’s attention is diverted, Lebeau flicks the kinetically charged sliver of wood directly towards a gas tank which explodes and causes the diversion he needs to gain access to the inner compound. Of equal importance to Mann’s pencils was Rosenberg’s colouring which suited the pencils and inks of the Manns and made the art as a whole pop from the page. Such an example is a page towards the end where Gambit’s espionage tactics become clearer. On this page, previous panels are recycled in order to emphasize their having occurred in the past, differentiated by the faded colouring of each middle panel running vertically on the page. This is complemented by a number of other panels, such as one showing Cich’s recorded handprint on Gambit’s glove which is a collection of black and purple markings.

The first issue of this latest Gambit title was everything you should have expected if you’d read the previous volumes. It was a solid read, but nothing overly ground breaking for a character whose popularity has far exceeded the success of his titles. Several elements were new to this presentation of the character which were welcomed, focusing more deeply into Gambit’s cunning personality than previous writers. The title is worth reading if only to see what Asmus does with the story for the time the series is published, but truly this book will likely only have a home in the long-boxes of fans of the character.