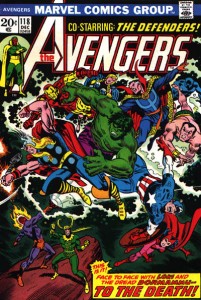 This is such a great comic book!

Avengers #118 is part 7 of the now famous 8 part Avengers/Defenders War crossover. The story spanned Avenger #115 to #118 and Defenders #8 to #11. Though the story concludes in Defenders #11 the climax to the epic battle that saw the two teams thwart the dreaded Dormammu’s plans to invade our dimension happens in this issue.

This story is considered the 1st major Marvel crossover; it’s a now legendary comic event, one of the defining moments of Marvel’s Bronze Age.

For me this is the best of the 8 covers, yeah I know Defenders #10 is iconic and you may be right but I call Defenders #10 the Stairway to Heaven to Avengers #118’s Four Sticks, if you know what I mean.

Climax issue, fantastic cover, part of an important Bronze Age story arc, the whole stable of Marvel in one issue, embedded in perhaps the most collectible era of the Avengers, how much more do I have to say to convince you that you should own this issue.

The wild card for this issue is the Silver Surfer. If and when Disney/Marvel does get the rights to the Surfer back from Fox every book in this crossover story will spike upwards. Let’s all start a petition, we’ll address it to Fox and we’ll demand that they give the Silver Surfer rights back to Disney/Marvel. The legion of comic fans that know and love this story will seem puny compared to the millions upon millions that will gobble up the blockbuster movie version!