It will come as no surprise to longtime readers that I am a huge Spider-Man fan. It is the book that I have collected the longest, the character that I have always liked the most, and the one that still look forward to reading every month. The first issue that I bought was ASM 324, part of the AssassinNation Plot where the killer revealed was Sabretooth. I already knew Sabretooth from the pages of X-Men and I had some Marvel Team-Up issues, but it was that MacFarlane cover that drew me in.

Comic book creative teams are kind of like Saturday Night Live casts, you like best whatever was the first team or cast you saw. So whether it is Mike Meyers and Dana Carvey or Micheline and MacFarlane you have a soft spot in your heart for whatever first introduced you to the work you know and love. Over the years I have owned every issue of Amazing Spider-Man. I’ve sold them all now but have Omnibus Editions and Marvel Digital Unlimited to re-read at my leisure. I also owned all of Web, Sensational, Marvel Team-Up, Tangled Web, Spectacular, etc. and so I’ve read a lot of Spidey books. 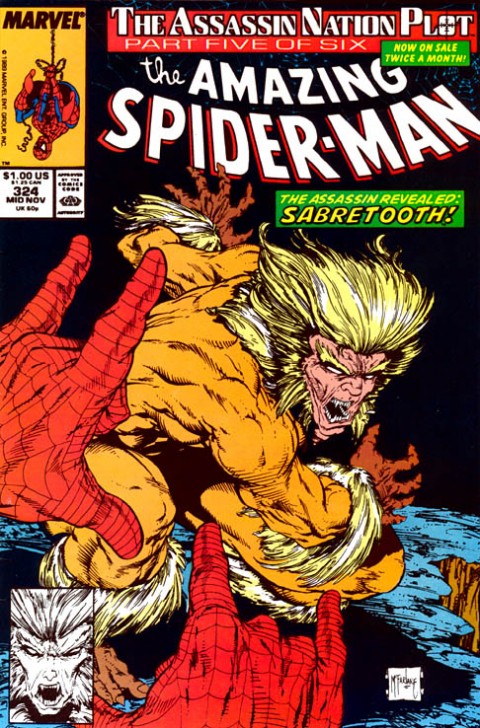 There have been stories and creative teams that are my favourites and others that I forced myself to read. So many great writers and artists have worked on these web slinging tales. In no order here is my list of favourites.

Writers:
Artists:
Here are some of my favourite stories, do you self a favor and track them down:
The character has guest-starred in almost every book Marvel has ever published from Avengers to Top Dog to X-Men. There is a Spider-Man story for everyone. He has been in movies, video games, lunchboxes, and breakfast cereal. And everyone, no matter who they are, can sing at least part of the Spider-Man theme song. Here’s to another 50 web-head.
# Amazing Spider-Man# Dan Slott# Mark Bagley# Spider-Man# Spider-Man 50th Anniversary# Stan Lee# Steve Ditko# Todd McFarlane