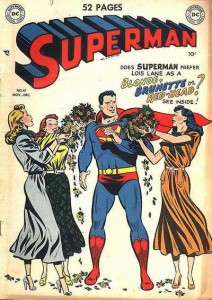 Three years ago in my Undervalued Spotlight #18 I talked about how for his first decade Superman did not fly. In the beginning Superman basically just jumped around “able to leap a tall building in a single bound”. I talked about how fans today just assumed he always flew.

I think it would surprise most Superman fans to discover that for the first 11 years of his existence as a superhero Superman did not encounter Kryptonite, nor did he know he was even an alien nor did he meet his real mother and father, nor did he visit the planet Krypton.

Imagine how important a comic book that introduced all these above concepts would be.

No need to imagine because Superman #61 delivers all of the above in the 10 page story “Superman Returns to Krypton”. In this great story the radioactive Kryptonian ore called Kryptonite is introduced to comic book readers (Kryptonite was known to listeners of the Superman radio show since 1943). Kryptonite is one of the most important concepts in the whole of the Superman lore; it represents his Achilles heel, the one thing that can hurt him. Kryptonite and its symbolism has entered the common language, tell anyone “that is my Kryptonite” and they will understand what you mean.

It’s hard to imagine reading Superman not knowing of his origins, not knowing that he is from the planet Krypton. We’d all assume this fact to be established early and it really surprised me that he ran around for 11 years oblivious to the fact that he was an alien. Again this concept is an important and lasting development for the character.

Superman #61 as an origin issue laid a lot of groundwork for the character. Stories centered on the concepts introduced here would carry Supes for decades, indeed until present.

This is one tough book to find in high grade, of the 47 Universally graded (non restored) by CGC there are only 3 at 9.0 and a lone 9.6. Recent sales of 6.0 and 7.0 grade copies are selling for just over guide. A bargain at anything close to guide I’d say!