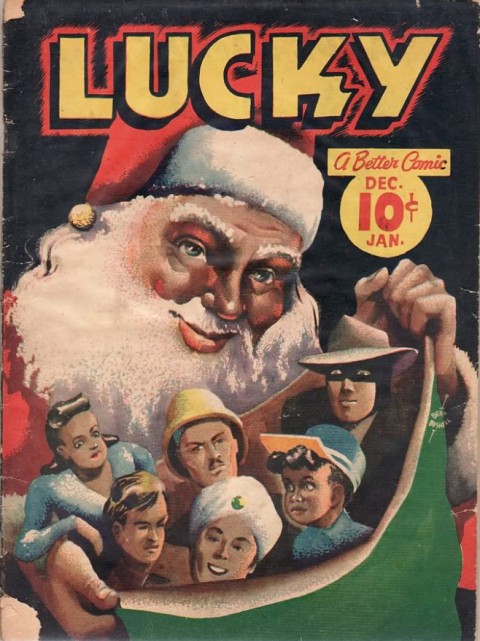 Honestly we should all be giddy just seeing the cover to this book, there are no copies graded and I only know of one that exists.

It’s a great Christmas cover with Santa bringing all Canadians a bag full of adventures starring some very cool and at that time very popular Canadian characters.

The little boy with the funny hat is called “Lucky” and the title is named after him. He is a little boy stuck in occupied France (He eventually gets to Canada a few years later).

The guy in the turban with the funny green moon on it is Danny from the series Danny and his Magic Ring (he can call up a genie to help him).

The guy in the pith helmet with the mustache is Steve Nelson from the series Jungle Raider.

The last guy in the mask is the one I have the least info on but I believe his name was The Black Wing.

Maple Leaf in turn was 1 of 3 successful Canadian Comic publishers during these WECA years, Anglo American and Bell Features were the other 2.

These Canadian wartime comics are collectively known as “Canadian Whites” (because they were printed for the most part in black and white). There were approximately 600 issues produced over the 1941 to 1946 time period. 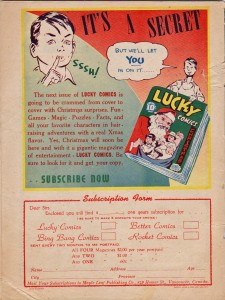 I would have loved to use an earlier Christmas cover but as I’ve mentioned before these things are impossible to find, even pictures of them are impossible to find. Canadian White historian Ivan Kocmarek did send me a scan of a back cover to Lucky Comics Vol. 1 #10. This issue advertises a cover which is similar to ours for the year earlier Christmas of 1942. That comic would have the earliest Christmas cover on a Canadian comic book I can find unless there is a Christmas 1941 issue which would be Vol. 1 #5 which I can’t find a scan for.

Any Christmas cover of a Canadian White is undervalued, plain and simple.

Its Christmas Day 2012 and my present to you is this undervalued gem. Enjoy.

Canadian Whites are not listed in the Overstreet Comic Book Price Guide (though they should be). The few mid-grade Lucky Comics from the mid 1940s that do surface sell for around $300.

Thanks to Ivan Kocmarek for his help with this Spotlight.