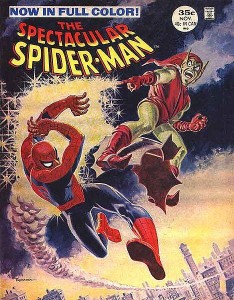 This spotlight ranks up there as one of my favorites! Mikes knowledge and passion shine through, his arguments are sound, his judgments just. This spotlight has inspired me to try to be more personal with my future posts. Mike’s love for comics is infectious. I am honestly awed by this post.

Take it away Mike…

Undervalued Spotlight two in one. It features a magazine and a comic, both of which I feel have been undervalued by the Overstreet Price Guide. Let’s take a trip back to1968.

In 1968 like today the Amazing Spider-Man was hot.  People couldn’t get enough of him and Marvel was looking for new ways to expand his readership. In the summer of 1968 a new magazine was published “The Spectacular Spider-Man ” #1. I can still remember the first time I saw this mag at my corner store. It had kind of a cartoonish looking cover and worse it was in black and white!  To the eleven year old me it looked like a coloring book. Still it is was Spider-Man, so I collected 20 pop bottles (2 cents each) and bought the book. I will keep this short and just say it was huge disappoint for me, for the reasons stated above and the forgettable villain and story.

In my favorite comic book title The Amazing Spider-Man, exciting things were taking place. Beginning in issue #61 and in every issue running through #66 a Norman Osborn subplot was playing out. Norman Osborn was getting his memory back. The Green Goblin, Spider-Man’s greatest foe was coming back! This was a real big deal back then. The collecting community was pumped. In issue #66 we have Norman Osborn in full costume with the Goblin mask in hands, his memory getting clearer by the second. Great, he’ll be in issue 67 or 68. Nope. The storyline disappears from the Amazing Spider-Man and ends up being told in our undervalued spotlight…

Spectacular Spider-Man Magazine issue #2. As you can imagine the then 12 year old me was not thrilled when this happened, however this evaporated when I saw the book. Almost all of the things that were wrong with issue #1 were corrected. A fantastic painted cover by John Romita, a great 58 page turner of a story featuring the Green Goblin, and the price dropped down to a whole $.35 cents. Who could ask for more! The only problem I had with this book was how it fit in my stack of comic books. There was always this one angry inch (not Hedwig’s) that stuck out on the edge that got bent and torn. It eventually became the most beat up well read book in my collection.

The Spectacular Spider-Man Magazine ended with this issue. The Terrible T V Terror, the title of 3rd issue, never made it to print. The title returned (font and all) in 1976 and had successful 20 year plus run as a comic book.

Not a fair comparison a magazine to a comic book you say?

OK the only book that is comparable is very mediocre Spectacular Spider-Man #1 it splits as $75/$148/$220 for the 8.0/9.0/9.2 splits. These prices are 10-20% more than our vastly superior #2. This is a classic example of what Walt was discussing about the # on a book, versus the content of a book and how it is priced in Overstreet.

If this story had been published as Amazing Spider-Man #68-70 or as Annual #5 or 6 it is an easy double to the price given to this magazine. Perhaps it is because it is a magazine and not a comic book. So if you must own this story in comic book form you need to find… 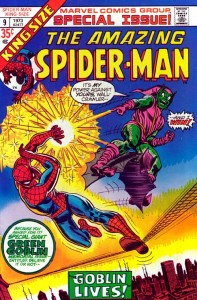 I don’t feel as strongly about this one as I do the magazine. It is less than the magazine in some areas. First it does not have the John Romita painted cover. It has a very good Romita cover but not as good as the original. Second it has been re-edited from 58 pages to 40 pages. The story is still excellent but it’s just a little less. Third it is delivered after the “death” of the Green Goblin in ASM #122 and thus it loses a bit of its impact. If you put it in your collection between ASM#67 and 68 it’s perfect! As a plus it’s a Comic book, and without the angry inch it fits my comic box!

Other magazines that have been re-printed are not. Conan #16 (Savage Tales #1) and ASM #116-118 (Spectacular Spider-Man #1) are priced like the regular continuity that surround these books. This again speaks to the number on the book versus the book itself. Exhibit B for Walt.

OK I’ve nerded out on this enough.

Neither of these books carries a Green Goblin premium in Overstreet Price Guide. The only Silver /Bronze Age appearances of this character not to do so.